The Buenos Aires suburb of Retiro prepares for change Gateway to South America on 06/08/2017 - 16:48 in All categories of countries are, Argentina Lifestyle, Argentina-General, Buenos Aires Residential

While the city awaits the pending tendering of eight parcels of prime land, the ongoing progress of the Bajo Underpass and the recent restoration of the Historic Retiro train station marks the beginning of a change in the characteristics of this historic neighborhood with its increasing gentrification. 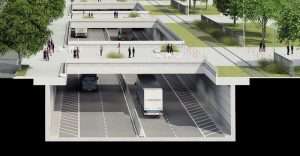 The neighborhood of Retiro has and is changing its characteristics: The Paseo del Bajo will allow it to gain about six new blocks in an area in which there was no land available to build in the heart of popular Retiro. The lands of Catalinas Norte, defined by the avenues Madero and Antarctica Argentina, and the streets Cecilia Grierson and San Martín will be sold and the money obtained will allow the financing part of the work. In this way, the municipality will have about 90,000 m2 of land, which will allow the development of 200,000 m2 in mixed projects. The tendering of the land will be done in two stages: in the first, seven parcels will go on sale and in the second, the one currently occupied by the railroad will be added areas that connect Retiro with Puerto Madero and Costa Salguero. 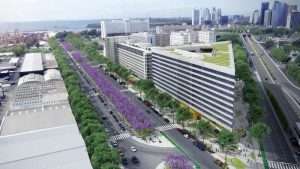 Among the areas that will be enhanced is the area of the former Hospital Ferroviario. There will be the  Quartier Puerto Retiro District, a mixed project with more than 115,000 m2 of new build, located in two blocks between the Avenues Antarctica Argentina and Ramón Castillo. The $ 215 million investment project will feature three buildings ranging from a 32,000 m2 commercial walkway to offices and 550 flexible units.

In this context, a few days ago the renovation of the station of the Miter line was inaugurated in a rework that complements the old with the modern features of the 20th century. This construction, an emblem of the city, was first inaugurated more than a hundred years ago, designed by the English architects Conder and Follet, authors also of the architecture of great stores like Gath and Chaves, Harrods, or Thompson in Buenos Aires.

At the time of its inauguration, it became one of the most important terminals in the world, not only for its monumental aesthetic but also for its technical qualities. From here it ran the first electric train of passengers of all the South American continent.

The improvement plans aimed to recover the original splendor of this building with it being declared a National Historic Monument in 1997.

It is about preserving an architectural heritage and at the same time modernising its function and security in a space where more than sixty thousand people per day circulate.

The task of restoration was focused on the enhancement of the hall and repaired boleterías, the area of platforms, the facade, interior shops, and bathrooms. The main works included the replacement of floors and the restoration of walls and ceilings, over the gables and the dome of the building.

“The goal was always to leave the station as close to what it was originally, restoring everything possible to achieve maximum similarity,” says Santiago Tarasido, CEO of CRIBA, the constructor who carried out the restoration project. One of the great challenges was to achieve maximum efficiency in the work without the terminal stopping working- a fundamental node of connection and transport.

In spite of the haste with which the passengers who use the train circulate daily, it is almost impossible not to perceive the historical value of the station, which becomes a strong attraction for tourists and lovers of good architecture.

The historian Ricardo Watson, founder of the tourism agency Eternautas – specialized in the design of tours with historical content – goes back to the history of its construction to provide more data, and says that the architect Follet was selected among one hundred and twenty aspirants to occupy a key position in the Condor study: the development of the project for the Retiro railway terminal. ” The abandonment of the English modesty and the passage to the monumentality of the French architecture give an account of the necessity that the great railway terminals had to adapt to the increasing number of passengers.

The magnitude of such a structure, unique in its kind in Latin America, expresses the extension of the rail network in the country and the power of monopoly companies: about five hundred trains came and went every twenty-four hours.  Watson points out the spatial richness of the station, with a 232-meter-long headland. It also notes a perlite: “TheMitre station is the only large terminal in the world that incorporated two unpublished spaces: a carriage entrance and a hall of ticket offices, which are the culmination of the English experience in the design of large railway terminals; A kind of ‘missing link’ within the typological evolution.” he says.

Today this architectural piece takes on another dimension. The installation of new security systems was another of the objectives of the work. Tarasido highlights the replacement of the detection and fire prevention system in all areas and the total renovation of the electrical installation and all the lighting by LED lamps.

In addition, a new complete audio system was installed, touch screens and Internet coverage via wifi for passengers. The station is transformed into a meeting point, as it happens in the best cities in the world, where not only transit passengers but tourists visit for the historical values, concludes the CEO of the construction company. Currently, the second stage of this work is being developed, which includes all subsoil where there will be housed dependencies for the maintenance and operation of the station, technical rooms, warehouses, changing rooms, among others.