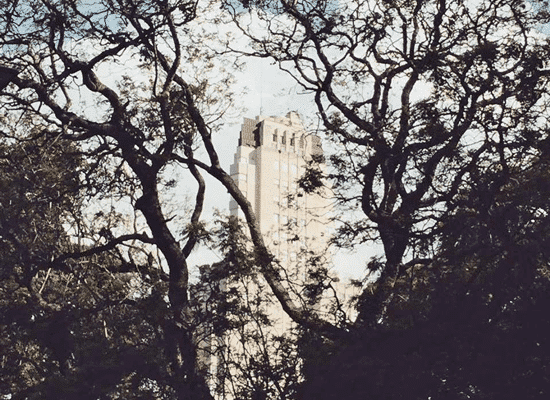 Gateway to South America on 20/12/2016 - 15:05 in All categories of countries are, Argentina Lifestyle, Argentina-General, Buenos Aires Residential, Lifestyle Properties in Argentina

As happens in the rest of South America, 80 % of Argentines choose to live in urban areas.

Buenos Aires is the second most populous city on the continent. Even if it is usually associated with buildings, people, traffic, and noise, there is a critical element that is often ignored:  Their trees.

As I  had travelled a. lot in Europe, I was amazed by discovering that medieval cities didn’t count on having trees within their walls …  It was then, while crossing their narrow streets, that I considered a famous quote I once heard.

Nowadays, I can’t walk through the streets of Buenos Aires without admiring these beautiful trees and understanding that their silent presence is actually part of  the city’s patrimony:

This city counts 435.000 trees and around 3.000 varieties of species, including fruit trees.

Even if we do count the Botanical Graden (holding more than 5 thousand species), the city itself has its own collection of examples. 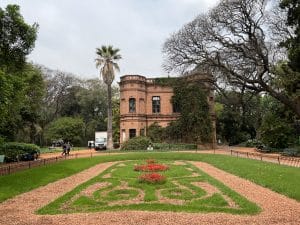 Buenos Aires has historically had urban planning with a particular interest in green areas started by the famous landscaper Carlos Thays, responsible for a significant part of the fantastic colours of their streets.

This provided  Buenos Aires with an urban tree forest of 150,000 that rotates its flowering throughout the year. A studied and synchronized vegetal rainbow from endless numbers of varieties, Jacarandás, Ceibos, Lapachos and drunken sticks like noble custodians of the city. November in Buenos Aires is, perhaps, its best gift: the violet explosion of the Jacarandas in full bloom; The perfume of the Jasmines in temperate days; The lilac carpet of fallen petals stamped on the sidewalks, and the fiery vermilion of the Ceibo flower. All “matured” at the same time, as an anthological floral and green orchestra *. 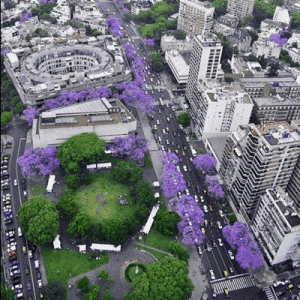 Whilst in other cities of the world, the tree population tends to diminish, Buenos Aire’s green spaces keep expanding, and the progressive city government is always giving special attention to urban planning whilst respecting Thays philosophy.

Administrations have added green spaces to Buenos Aires for several years in their policies.

Trees can cool cities between 2C and 8C. When planted near buildings, trees can cut air conditioning use by 30% and, according to the UN Urban Forestry office, reduce heating energy use by a further 20-50%. One large tree can absorb 150kg of carbon dioxide yearly and filter some airborne pollutants, including fine particulates.

Green areas are not only represented by squares and parks but also by tree-lined avenues and streets, riverfronts and all pedestrian and/or open spaces that may eventually be converted for public use.

It is good news to know that Buenos Aires has an even more significant number of trees (0.18 per inhabitant) than the current international ideal (0.10 per inhabitant). However, its distribution is not equal.

Some areas need new plantations, and the distribution of open spaces, in general, appears uneven within the city itself:

The district that has the most significant amount of land per inhabitant is in the commune 1 (Puerto Madero, San Nicolás, Retiro, Monserrat, San Telmo and Constitución)

In any case, open spaces do not always correspond to green spaces.

This year, while Puerto Madero and Retiro  are increasing their population, the government presented the latest urban intervention, which will be called Paseo del Bajo:

The project involved the creation of a new underground highway where on the top, there will be roofs with stone work and trees, cycle paths and sidewalks, aerobic stations and other facilities to encourage recreation and sustainable mobility in the area. This would have a double benefit: to add green spaces and, mainly, to advance the so much united union of the city with the river ( Rio de la Plata).

“In areas with more trees, people get out more, know their neighbours more, and have less anxiety and depression. Being less stressed, they become more active.”

Besides enhancing the beauty of the city, the growth of greener areas provides a new value to be considered in terms of real estate investments since it’s proved that commercial activity also tends to develop where trees are also economic drivers.

Even if the money tree hasn’t been created, the New Urban Agenda, held at the Habitat III conference, focused its vision on a pluralistic, sustainable and disaster-resilient society that fosters green economic growth. So, money might be growing from trees shortly, after all.