Gateway to South America on 02/11/2017 - 16:40 in All categories of countries are, Argentina-General, Buenos Aires Residential

The number of property sale transfers in the city of Buenos Aires reached 6011 operations in September 2017, a figure that represents an increase of 42.9% compared to the same month of the previous year. In addition, the total amount of transactions made rose 104% to $ 14,243 million. The average value of the properties sold totaled $ 2,369,442, a rise of 42.8% compared to the values of 2016. 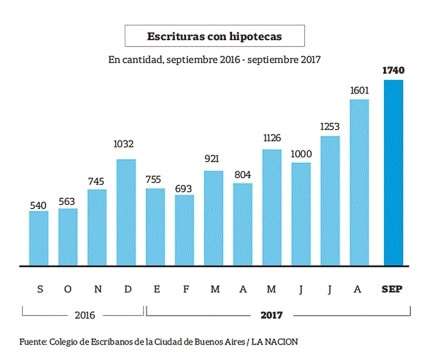 As has been happening in recent months, the deeds formalized with bank mortgages grew rapidly again: they increased 222%, to 1740 new mortgages, accounting for 28.9% of total operations, compared to 12.8% a year earlier. In terms of value, its share rose from 10.6 to 17.5 percent.

Finance Minister Nicolás Dujovne revealed on Tuesday the details of the tax reform that the government will submit to Congress. One of the most novel aspects was the announcement of the elimination of the property transfer tax (ITI). Instead, the sales of a second property (not single dwelling) will be taxed 15% by way of profit on the said operation. Those corresponding to single housing will be exempt from both taxes.

Alejandro Bennazar, president of the Argentine Chamber of Real Estate (CIA) was in favor: “What is eliminated is a procedure that was cumbersome,” he said. “We welcome any reduction of stamp taxes or other taxes that are present or future that you want to remove,” he concluded.

Alejandro Ginevra, president of developer Gnvgroup, said that the measure will have positive consequences. “You are eliminating a distorting tax before you bought an apartment, you lost money having also had to pay this tax”. 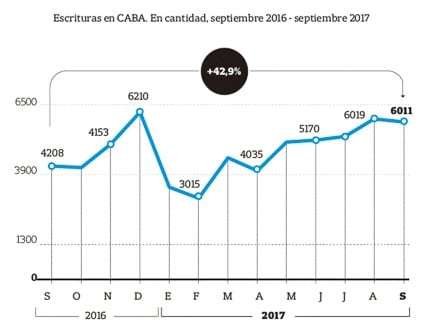 “Today I would not make a diagnosis other than a short-term,” said Alejandra Covello, president of Covello Propiedades. “The fine analysis will come when the regulation is in place, but a point that is already making a noise is if the difference between the original value and the sale value is going to be updated due to inflation,” he said. In announcing the measures, Dujovne clarified that all changes will be applied to real income (discounted inflation).

According to Covello, another issue to be resolved is “the multiple taxations”. “You have to eliminate stamp taxes and checks, they are things that do not generate a healthy impact on all operations.”

Similar concerns expressed Mario Gómez, director of Le Bleu Negocios Inmobiliarios. “If inflation were controlled from now on, it would not have to be that important,” he said, adding that “it would be good if that adjustment were included in the regulations.”

For Gomez, however, “it is not very good news” the introduction of the income tax: “On the one hand, there is an attempt to make more movement in the market and on the other hand, this occurs. This measure discourages demand because it ends up being a hindrance when considering the purchase of real estate, “he said.

“We believe that the measure would not affect people who acquire their first home or replace it with another with a similar destination,” said the clerk Ezequiel Cabuli, of the Cabuli Vecslir office. “We would have to see how it would affect investors who, although they are not habitual buyers, look for real estate in a refuge of value for their investment, and if this is still convenient,” he added.

Comment: Anywhere else in the world this would be considered a boom but here it is the market playing catch up from years of recession, unavailable credit and a serious outflow of investment capital. Now the brain and capital markets drain is reversing and we see more and more Argentines and foreign companies returning to capitalize on the growing economy supported by a business-friendly government.