Gateway to South America on 11/11/2014 - 15:25 in All categories of countries are, Argentina Lifestyle, Argentina-General, Buenos Aires Residential

The Buenos Aires Subway, also known as the Subte (for sub-terraneo) was the first underground metro system in South America opened in 1913 by an English company called Anglo Argentine Tramway Company ( line A ). The Subte is the fastest way to travel through Buenos Aires. It is not as expansive as the bus system, but it will usually get you fairly close to where you need to go. There are five different lines: A, B, C, D, E, F, G, H, P and I. . You will probably end up using Line D if you are staying in Palermo, Recoleta, Belgrano, or Microcentro. All of the lines are denoted by a different color, and the stops are approximately 5 blocks away from one another. You can check maps, timetables and status of the different lines at the official subte website.
Here’s how you take the Subte.

First, you need to figure out where you are, where you are going, and where the nearest station is. One option is to look at the Subte map. The map shows what street the line travels under, and the cross streets near all the stops. An easier way is to use the Guia T. The Guia T shows ALL streets and has markings for each Subte station.

Once you’ve found your station, you will need to pay . One ride (viaje) costs AR$5. I would recommend buying multiple viajes at once as the line to buy tickets is long during peak hours. Find the ticket window. It will be labeled “boleteria.” Go up to the window and say dos viajes, por favor (two rides please). Replace dos with the number of viajes that you would like. Another faster, easier, and more efficient way to ride is to use the magnetic sube card. These cards only cost about AR$15 and can be found in many different centers.

You’ll need to fill out a form with your name, passport number and address in order to get the sube card. Once you have the card you can go to the same boleteria in the subte and say me carga diez (or whatever amount) pesos, por favor. (Put ten pesos on it, please). You can put as much money on it as you like and if you find yourself a little low, the city allows you to go negative 10 pesos! It’ll just be discounted from your next recharge.
If you bought the physical ticket, put it through the little slot in the molinete (ticket gate). It will pop up once it has registered. Be sure to take the ticket, especially if it one with multiple viajes. If you choose to use the Sube, all you have to do is place the card close to the pad on the molinete. It will beep and say on the screen how much you have left. Check the map in the Subte station and make sure that you are going in the right direction!

Unless there is a Subte break-down, delay, or strike, you do not usually have to wait longer than 5 minutes for the next train to come. The train will eventually come, and you will get on and look for a seat. Like the bus, pregnant women and the elderly are given preference to the seats close to the doors. If you do not find a seat, hold onto the nearest railing and make sure you look out for your stop.

Line H extensions to the north from Corrientes to Plaza Francia, serving intermediate stations at Córdoba, Santa Fe and Las Heras, and south from Hospitales with stations at Pompeya and Sáenz, were initiated with ground-breaking ceremonies on 17 January 2012.

The future expansion is based on the programme Plan of New Lines:

. These lines’ routes have already been approved by the Legislature of the City. 39.3 km will be added to the network, expanding it to about 97 km in total length and providing several stations with various interchanges. This will also create new north-south routes, resulting in an appropriate network to avoid the city centre. The new lines will mean that more than two million inhabitants of Buenos Aires (accounting for about 70% of the city’s population) will live within 400m of a metro station. The new lines will run between 56 new stations.

Line F will run from Barracas to Plaza Italia and will include 16 new stations. The planned route length of this line is 10.8 km.

Line G will connect Retiro and Caballito / Villa Crespo; 12.5 km long with 15 new stations. Construction is expected to start in 2012.[7]

Line I will run Parque Chacabuco to Ciudad Universitaria with 18 new stations. The route length is 12.6 km.

Check here for the State of the Subte. Visit www.subte.com.ar for maps and other information. The interactive site also gives estimated times and transfer information between stations. 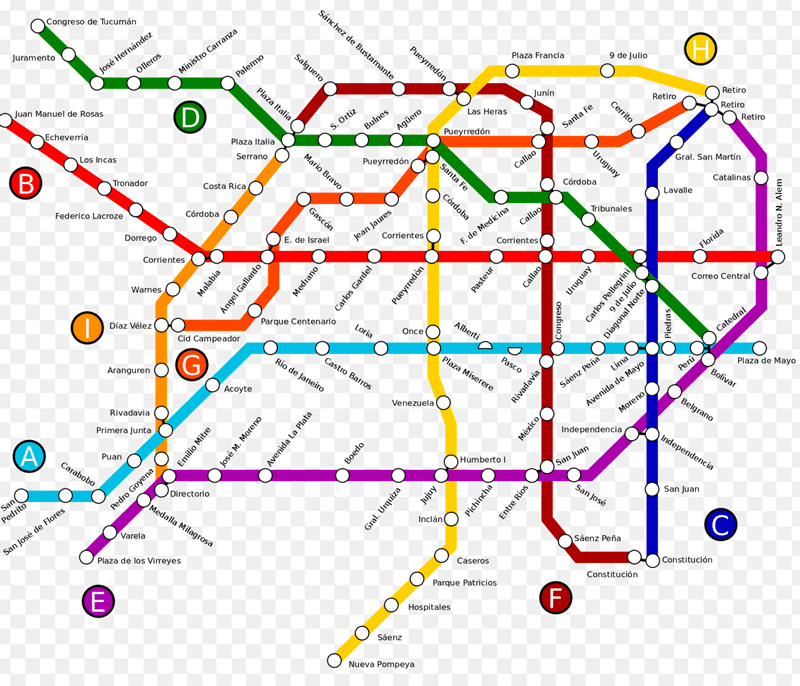