Gateway to South America on 05/09/2022 - 17:07 in All categories of countries are, Argentina Lifestyle, Argentina-General, Buenos Aires Residential, Commercial Argentina 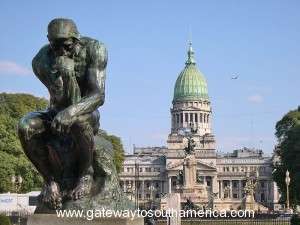 Argentine Congress and statue of “El Pensador” by Rodin in foreground

Walking down Avenida De Mayo, you will be in awe of the many architectural treasures reflecting the glory days of Buenos Aires in the early 1900s.  Being the main thoroughfare between the two governmental buildings of the Casa Rosada in Plaza de Mayo and the Argentine Congress in the Plaza de Congreso, the infamous Avenida de Mayo is often compared with La Gran Via in Madrid.

It has also been likened to Paris or Barcelona due to its sophisticated buildings of art nouveau, art deco, neoclassic, and eclectic architectural styles.  You will be captivated by historical buildings such as the London City Confiteria, Teatro Avenida, Ex-Critica (now housed by Federal Police), the Old Majestic Hotel and the beautiful fountains in Plaza Congreso and 9 de Julio.  It was the meeting place for all the cultural and artistic celebrities back in the day.

The avenue was named in honour of the May Revolution of 1810 (the event that led to Argentine Independence).   In 1913 Avenida de Mayo was the site of the first Buenos Aires Metro station and the first metro built outside the United States or Europe. 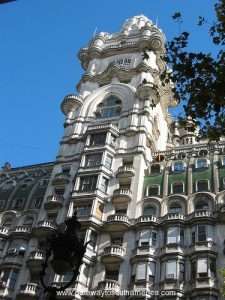 One of the main attractions of May Avenue is the enchanting Barolo Palace (Palacio Barolo). During the 1910s, two people dreamed of bringing poet Dante Alighieri´s ashes to Buenos Aires: the industrialist Luis Barolo (1869-1922) and the architect Mario Palanti (1885-1979). For this purpose, they built this palace on 1300 Av. De Mayo. The Palacio Barolo was designed following the cosmology of Dante’s Divine Comedy, motivated by the architect’s admiration for Alighieri. The general division of the building and the poem is done in three parts: Hell, Purgatory and Heaven. The ground floor is Hell, the first 14 floors are Purgatory, and the following floors are Paradise, and the cupola represents God. When it was built, it was the tallest building in the city and South America until the appearance of the Kavanagh Building in Retiro. 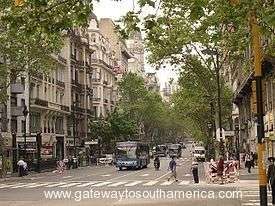 The avenue itself underwent its only significant alteration in 1937 when two blocks were demolished to make way for the cross street Avenida 9 de Julio (then the widest in the world). Seeking to halt future demolitions along the avenue, the Argentine government declared the Avenue a National Historic Site in 1997 and, as a result, the aesthetics of the buildings, billboards, and marquees can no longer be altered. 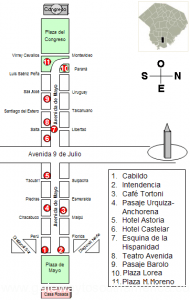