Gateway to South America on 08/11/2018 - 21:54 in All categories of countries are, Argentina Lifestyle, Argentina-General, Buenos Aires Residential, Commercial Argentina, Lifestyle Properties in Argentina

Buenos Aires has become one of the most admired cities in the world due to its ability to reinvent its streets and public transportation.

In 2014, Buenos Aires won the Sustainable Transport Award for giving Avenida 9 de Julio, the widest avenue in the world, a transport and pedestrian makeover. Four years later, how are these interventions for improving the quality of life in Buenos Aires? 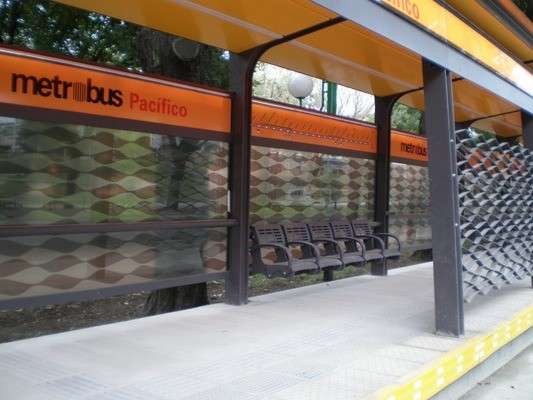 The implementation of transit on Avenida 9 de Julio translated into shorter trips for those who used public transport because all the buses that passed through downtown are now funneled onto the 9 de Julio Metrobus [BRT]. There was a reduction of almost 50% in travel times.

Road accidents were reduced because the average speed of cars was reduced. Within what is called the pedestrian zone, the maximum speed is now 10 km per hour. The entire downtown area was once very noisy and heavily polluted. The air and noise pollution levels dropped a lot. Before it was impossible to even have a conversation there. Now there is economic development, adding life beyond the offices and banks. Nightlife is beginning to come up in that neighborhood and we hope soon enough that will create the possibility of people moving downtown to a newly renovated CBD.

Buenos Aires, the second-largest metropolitan area in South America. Over 13 million people in the metropolitan area call this coastal city home — and that number is expected to swell by another one million before 2030. Uniquely for the region, the city is in relatively good shape right now. And, in order to keep it that way, Argentina is planning on investing a lot more money in infrastructure and civic enhancements.

The viaduct is being built to elevate the San Martín commuter line above street level between Palermo and La Paternal stations, eliminating 11 level crossings where 250 000 bus passengers and 260 000 car drivers per day can experience delays of up to 20 min. 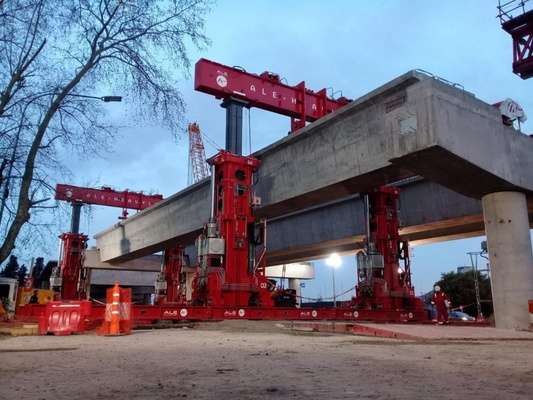 The viaduct will be formed of 538 concrete girders weighing 230 tonnes. The majority of these are to be positioned using a girder launcher, but the space between two of the piles is larger than this can accommodate and so an alternative lifting method was needed for four girders. The presence of an underground gas pipe ruled out the use of a high-capacity crawler crane which would impose high ground pressures.

The TLG1000 hydraulic gantry was designed in-house by ALE and built at its R&D facilities in the Netherlands before being shipped to Argentina. It has a capacity of 1 000 tonnes up to a height of 12 m, enabling it to position the bridge sections while offering stability and an even load spread. Its monitoring systems supplied data on the ground settlement to provide assurance that the gas pipe was not affected.

It will be located between Alicia Moreau de Justo – Huergo-Madero Avenues and will have four lanes exclusively for trucks and, buses, which will allow faster access to the port and the Retiro Terminal.

In addition, it will have 8 lanes for light vehicles, four in the north and four in the south. This work will improve the flow of traffic of cars, buses, and trucks, rearranging and increasing road safety throughout the area.

Apart from the infrastructure improvements, the city has embraced technology and environmental improvements leading many to suggest that American cities should follow its lead.

Popular investment destination
14 out of the Top 30 Fortune 500 companies have chosen BA to establish their businesses. 12 out of 14 firms trading on the Dow Jones Industrial Index have settled in BA.

Environmentally friendly
#1 in Latin America in Sustainability and Natural Environment.

Sound and competitive infrastructure
#2 in Latin America in terms of Infrastructure Safety, according to the Safe Cities Index 2015.

Multicultural, flexible and qualified workforce
#1 in English-speaking capabilities in LatAm. +30 universities. 217 graduates for every 1,000 inhabitants.

The high quality of life and living standards
With a UN’s HDI of 0.88, BA ranks above countries like Brazil, Chile, and Spain. #2 Best Place to Live in LatAm.

With a population of more than 3 million spread over 78 square miles, Central Buenos Aires owns more than one million pieces of public infrastructure, including 370,000 trees, 120,000 public lights, 56,000 sidewalks, and 28,000 stormwater drains.1 Maintaining such a vast public infrastructure can be a challenge. The city has long allowed citizens to log complaints or service requests through a call center for everything from fixing a pothole to removing graffiti. Unfortunately, the feedback mechanism was largely ineffective since the city was very slow in addressing those complaints, averaging 600 days (almost two years) to resolve a complaint in 2011.

In 2010, city hall resolved to fix this problem. Part of the solution was a new IT system that would streamline information flow and improve departmental coordination.3

The city launched a mobile app which citizens could use to register complaints or they could flow in via social media. For instance, when a resident sees a problem like a manhole missing or a broken sidewalk, she or he can tweet a picture to the ministry along with a short description.

The app, using an integrated geographic information system (GIS) technology, sends the location of the complaint to the ministry and work is assigned to the nearest vendor to resolve the issue. To close the loop, a city street inspector—using a mobile device—validates the work done by the vendor and uploads a picture through the app showing the issue was resolved.

The ministry also uses dashboards to make sense of the real-time data that flows in. The dashboards provide insights on the status of each complaint, how the ministry is addressing it, and also captures citizen ratings on resolved complaints. It has other apps for tourists and locals.

The data that Buenos Aires is collecting via sensors and crowdsourcing also enables the city to evolve hyperlocal solutions for certain areas. For instance, the city is now able to predict floods in certain areas using sensor data. The city frequently faces severe floods due to its location on the shores of the river Río de la Plata. Apart from using data from weather reports, the city’s sensor network in sewage drains can now measure the speed, direction and level of water in the sewage drains and feed the data to city IT systems, setting off an alarm if flooding is predicted.4

The responsive system has created a tremendous impact on the city’s quality of life parameters. The average time to resolve a complaint plunged 93% without an additional budget, allowing the city to fix more problems in less time. The city has also seen an uptick in almost all satisfaction indices including the green spaces satisfaction index (49 to 76), streets works index (13 to 45), public lighting index (19 to 51), and stormwater drains index (19 to 56).5

Designated as Latin America’s smartest city, Buenos Aires’ digital innovation, sustainability, open government, and technology advancements are putting it at the forefront of the trend in the region. The city recently made the IESE Cities in Motion list, ranking number one regionally, ahead of other important cities including Santiago de Chile, Montevideo and Mexico City.

Some of the features that have made Buenos Aires a smart city are digital enhancements to existing transport functions to bring public mobility into the future. These include the smartphone applications Smart Parking, which allows users to find available parking spaces throughout the city; BATaxi, where passengers can request a taxi on their cellphone; and BA Cómo Llego, which lets people map out routes throughout the city, whether walking, biking, driving or using public transit.

The concept of being a ‘Digital Citizen’ is also part of Buenos Aires’ recent developments, connecting city residents closely to both the municipal government and their own neighbors. Economic development and improving the ability for citizens to become entrepreneurs is also spurring business and allowing the city to move forward. What’s more, social factors and human development are not forgotten, with a constant awareness of the role that civil rights, public access and participation, quality of life and other humanizing aspects play for those living in Buenos Aires.

These are some of the features that propelled Buenos Aires onto the IESE list, which is part of the “smart” cities ranking of the Cities in Motion 2017 Index, a research platform launched jointly by the Center for Globalization and Strategy, and the Department of Strategy of IESE Business School of the University of Navarra in Spain, which has been ranked as one of the top ten business schools in the world by both The Economist and Forbes.

Among other contributing factors were actively improving air quality conditions and continuously monitoring air pollution levels and other environmental factors through the placement of approximately 1,000 sensors throughout the city. Buenos Aires also created Wi-fi infrastructure to bridge the digital divide for all citizens, including within vulnerable neighborhoods. Another key attribute of the city is Institutional Transparency: Buenos Aires provides accessible data on over 200 categories to the public and is a pioneering member of the Alliance for Open Government.

As the smartest city in Latin America, Buenos Aires was chosen to host the 017 Smart City Expo World Conference from Sept. 28 to 30, in the newly opened convention center, Centro de Convenciones Buenos Aires CEC. More than 100 of the world’s leading companies and city representatives descended on Buenos Aires during the three days of the conference to give a series of talks, panels and presentations to the more than 16,000 participants of the Expo. Nearly 600 cities were represented, along with nearly the same number of exhibits and more than 400 speeches throughout the event.

About the Autonomous City of Buenos Aires

As Argentina’s capital and most populous city, Buenos Aires, is located on the western shore of the Río de la Plata estuary, on the southeastern coast of South America. The city is neither part of Buenos Aires Province nor the province’s capital; rather, it is an autonomous district. Buenos Aires is a top tourist destination that offers a unique blend of European elegance and Latin American passion.

Famous as the birthplace of tango, the city is also home to world-class opera, theater and art, well-preserved European-style architecture, native traditions, and to restaurants that overflow with wine from Mendoza and cuts of beef fresh from the Pampas.

The city’s neighborhoods are small and highly individualized, each with its own characteristic colors and forms. The destination attracts and satisfies vacationers of all tastes and budgets with its wide range of accommodations including luxury hotels, chic boutiques, and international brands and along with major conferences. For more information on tourism, visit turismo.buenosaires.gob.ar/en.

The UNESCO Creative Cities Network (UCCN) was created in 2004 to promote cooperation with and
among cities that have identified creativity as a strategic factor for sustainable urban development.