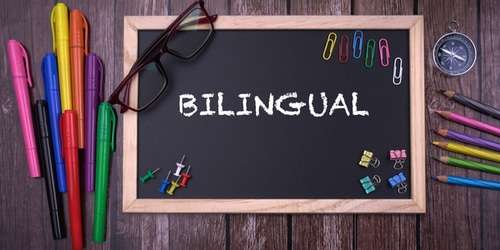 Children raised bilingual or multilingual in the early days will mix languages. They make errors by using the syntax of one language and the words of another. (“Touch the guitar”, my old Spanish teacher’s daughter would say, instead of “Play the guitar”.) But these problems disappear quickly. By three or four, children reliably separate the languages, knowing which can be spoken with whom. Their fluency in each would be the envy of any adult language-learner.

Many parents once believed that a second language was a bad idea, as it would interfere with developing the first and more important one. But such beliefs are woefully out of date today. Some studies seem to show that bilinguals have smaller vocabularies in each language (at early stages) than monolingual do. But other studies find no vocabulary shortfall in either language. In any case, the influence of mono- or bilingualism on vocabulary size is later overtaken by the importance of education, socio-economic status, reading and writing habits. In short, there is little evidence that raising a child bilingual will hurt their primary language.

The benefits, by contrast, are both strong and long-lasting. Bilingual children as young as seven months outperform monolinguals at tasks requiring “executive function”: prioritising and planning complex tasks and switching mental gears. This is probably because monitoring the use of two languages is itself an exercise in executive function.

Such studies control for socio-economic status, and in fact the same beneficial effects have been shown in bilingual children of poor families. Finally, the effects appear to be lifelong: bilinguals have later onset of Alzheimer’s disease, on average, than do monolingual.

All this is hot evidence for a mental exercise that could give children a lifelong advantage. Should you then run out and sign your child up for whatever language you can find? Alas, no. As the saying goes, “for whosoever hath, to him shall be given.” Multiple languages are best for you when you’ve had them from birth. The dramatic studies here work with “crib” bilinguals, children raised with both languages spoken by natives in their homes.

And even having a native speaker among the parents at home is not by itself enough. If a child is raised by one monoglot Anglophone and one bilingual in an English-speaking country, the child’s second language may atrophy if the bilingual parent isn’t strict about conducting all exchanges with the child in this language. This is the root of the “one parent, one language” theory that many bilingual families swear by. By this theory, consistency is important for the learning brain.

But one researcher on the topic, François Grosjean , disagrees that one-parent, one-language is a must. Instead, he says, “the need factor is crucial”—that is, the child must experience regular monolingual situations in each language. If there are no domains (school, travel, grandparents) where only one of the two languages will do, “children are very good at judging whether it is worth maintaining a language or letting it wither away.” One option he recommends is to speak only one language at home and the other outside the home. (This requires both parents to be fairly fluent in both languages, though.)

For parents who cannot make their children “crib bilinguals”, there are, of course, still many reasons to teach children foreign languages, and many benefits. Here, still, time is not on parents’ and teachers’ sides. The earlier children begin the second language, the better they will learn it.