Brazil´s Soy Boom drives an expansion of the railway networks 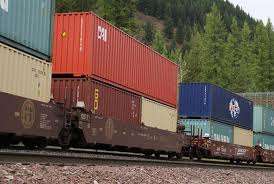 Despite challenges like high interest rates and high household electricity tariffs, the Brazilian economy has been growing at the highest rates seen in decades. Another problem that, although it has not stood in the way of growth, must be overcome is the costly use of roads for transporting farm products – an issue that is being addressed by the expansion of railway networks.

Driving the 215 kilometres between Cuiaba and Rondonopolis, in the west-central state of Mato Grosso, is an exercise in patience. The two-lane potholed road is lined with trucks going both directions, and passing one in this hilly terrain means taking your life into your hands.

Around 8,000 trucks a day drive along this stretch of the BR-364 road, the main connection between the main local production centres and foreign markets. The trucks, carrying mainly soy from Mato Grosso, then drive the remaining portion of the 2,000-kilometre route to the Atlantic ocean ports.

One solution to ease that burden on the road is the Ferronorte railroad, in the process of being built. It will connect the new agricultural frontier in the west and north of Brazil with the more developed south-central part of the country.

The railway sets out from the northwest border of the southern state of Sao Paulo, 1,056 km from Cuiaba, the capital of Mato Grosso. Railroad stations in three cities in Mato Grosso have already begun to operate.

The railway is to reach Rondonopolis in 2012, and two years later it should make it to Cuiaba, according to Francisco Vuolo, special secretary of intermodal transport logistics, a post created this year by the government of Mato Grosso.

A 90-year concession, renewable for another 90 years, for the Ferronorte railway line was granted five years ago to America Latina Logistica (ALL), which refused to build the railroad all the way to Cuiaba, and only agreed to cover construction up to Rondonopolis.

The company did not want to run the risk of taking on some 500 million dollars in debt in such a long-term business venture, said Vuolo. He regretted that the concession would put the railway, and a large part of the country, “at the mercy of private interests for 180 years.”

Meanwhile, demonstrations have been held to demand that the railway be extended all the way to Cuiaba. As a result ALL gave up the concession to that stretch of the route, and the state government will make sure it gets built, through an agreement with the national land transport regulatory agency ANTT and Brazil’s federal rail company Valec.

The railway will be named for Senator Vicente Vuolo, the father of the secretary of intermodal transport logistics Francisco Vuolo. As a lawmaker, Vuolo senior, who died in 2001, was the driving force behind plans for a railroad linking Cuiaba and Sao Paulo, approved in a national law passed in 1976.

There will be no problem finding investors to build the Rondonopolis-Cuiaba stretch of railway. Firms from “China, Germany and other countries” have already expressed an interest in forming a partnership, Francisco Vuolo said, because it will involve building “just 200 km and gaining access to another 1,000 km,” by forming part of a broader transport system, which through other connections will provide access to ports on the Atlantic.

The railroad will not only be used to transport soy and other agricultural exports to port, but will also carry merchandise back inland to Cuiaba, a city of 550,000 people.

Described as a “utopian project” when it was first proposed by Senator Vicente Vuolo, the railroad now responds to a clear need for large-scale transport facilities.

Over the past decade, Mato Grosso has been the leading national producer of soy, of which Brazil is the world’s second largest exporter. The state produces more than 20 million tons of soy a year, besides exporting cotton and corn, using the same land for a second crop, normally between February and July.

Nevertheless, agricultural development has been slowed down by logistics problems, says Seneri Paludo, executive director of the Mato Grosso Federation of Agriculture and Livestock (FAMATO).

Although local grain prices are “the lowest in the world,” they are increased by transport costs, which means both ends of the supply chain – the growers and the buyers – lose out, Paludo said.

The semi-arid northeast, Brazil’s poorest region, purchases expensive corn from the south, because corn grown in Mato Grosso “is not competitive there,” as the cost is driven up so much by transport, he explained.

The railway could reduce the transport costs for Mato Grosso’s agricultural output by 30 percent, according to the Movimento Pro-Logistica, created by local business associations in 2009 to demand more efficient transport alternatives.

A study by University of Campinas economists Vivian Correa and Pedro Ramos says the competitiveness of soy from west-central Brazil is undermined by the fact that 25 percent of the total cost is spent on transport, compared to less than 10 percent in the United States.

Greater logistics capacity is also indispensable due to the continued expansion of agriculture. The area under crops in Mato Grosso could double, since the state has another 9.2 million hectares of pasture land suitable for growing soy and other crops. The trend now is to replace extensive livestock farming with crops that are more profitable, Paludo said.

Besides the railway to Cuiaba, the Movimento Pro-Logistica is also pressing for construction of the Centre-West Integration Railway (FICO), which would cut across north-central Mato Grosso, where the state’s heaviest soy production is concentrated. The business movement is also calling for improved paving of existing roads, the construction of five new roads, and the creation of two navigable waterways.

Francisco Vuolo, a proponent of the railway like his father, prefers the original design of the Ferronorte line, which would link Cuiaba not only with the state of Sao Paulo but also with Porto Velho, the capital of the neighbouring state of Rondonia, and with Santarem, one of the main river ports in the heart of the Amazon jungle.

But for now, railway lines stretching to so many different destinations seem unlikely. A railroad requires a large initial investment, and the cost can only be justified by the transport of high volumes of freight, like minerals and grains, over long distances

Moreover, part of the soy produced in Mato Grosso already goes through Santarem, by means of a road that is due to be paved by next year, which will be complemented by waterways.

Santarem is a port city in the northern state of Para on the Tapajos river, where it converges with the Amazon river. The planned construction of five hydroelectric dams on the Tapajos river and others on two of its tributaries, the Juruena and Teles Pires rivers, over the next decade will make way for a navigable waterway that will serve both the north and the west of Mato Grosso.

The Teles Pires-Tapajos waterway could reduce the current cost of road transport of soy from north-central Mato Grosso by 74 percent, according to the study by the University of Campinas professors.