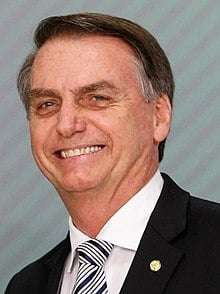 Gateway to South America on 30/12/2018 - 23:06 in All categories of countries are, Brasil Residential, Brasil-general en, Brazil Farms en

On January 1, the newly elected president of Brazil will take office with his chosen group of ministers, officially ending 16 years of left-wing government by the PT (Workers’ Party). Undoubtedly, there will be radical changes.

This huge country (larger than Australia but a whole lot greener) has great natural resources – reflected in the naming of one of its largest states “General Mines” – and is a successful exporter in everything from soya beans and coffee to vehicles, commercial aircraft, iron ore and niobium. The list is long and the values are surprisingly high.

However, the country is broke. A classic case of boom to bust. Riches stolen through corruption and wasted through badly thought out populist social programmes planned and administered by the outgoing government whose charismatic president Luiz Inacio Lula da Silva is now confined to jail, convicted for the first of a series of crimes of corruption.

Brazil needed social programmes.  There had never been a socialist government in its long history and it was the largest of the slave importing countries; so much so that most of the population today is descended from slaves, despite huge migrations from Europe and Japan over the past 100 years or so. The Brazilian constitution that was introduced 30 years ago guarantees equal rights for all Brazilians but more should have been done

Poverty rather than misery is widespread, especially in the northeast, which has a history of exploitation by the ruling elite.

It would be fair to say that at first the government of Lula was successful in improving the lives of the underclass. Some 30 million made the transition into the middle class and 20 million new homes were built. Record numbers of cars were produced and bought by smiling Brazilians, who had the unknown pleasure of owning a new car for the first time in their lives.

Boom but handouts aplenty
The economy boomed as the growing number of consumers happily spent both their wages and the easily available loans at absurdly high interest rates (18% per month for credit cards still applies today). Families were paid to send their children to school and NGOs, bloggers, musicians and artists sympathetic to the government could with relative ease, access funds, or even be paid outright for their “services”.

The problem was that these programmes were often badly designed and managed. Huge amounts were wasted and corruption, which had always existed in Brazil, took on a new form – government endorsed.

Politicians of all parties put their hands out and were compensated through a series of different schemes that rewarded those who voted with Lula’s party.

Not only politicians were involved: businessmen with government contracts and like-thinking allies, especially Cuba, Venezuela and Bolivia, received billion dollar gifts in loans, infrastructure projects and even a petroleum refinery.

On the other hand, services that should have been priorities, such as education, health and public security, deteriorated. The value of this corruption was calculated by Forbes to be around $US53 billion in 2013 and, while Brazilians were well used to corruption impacting on their lives, the PT made it a growth industry. Since then, it exploded, suggesting a sum exceeding $US100 billion a year by 2017.

Then, as the money started to run out, the country entered a recession. The jobs for cronies policy had increased the non-productive public service sector at a huge cost (think reverse Rogernomics), not only for salaries but also for the generous retirement schemes that now require close to 60% of the GDP to service.

Such is the nature of handouts that, while they are very easy to implement, they can be reined in only at great political cost so there was no stepping back.

Election surprise
Then came the October 2018 elections. With the ruling government’s planned candidate, the two-term popular ex-president Lula in jail and his replacement Dilma Roussef impeached, a surrogate candidate was found in Fernando Haddad, the ex-mayor of Sao Paulo – Brazil’s largest city. He is an inept radical leftist who admits to being a follower of Karl Marx.

In the other corner, Jair Bolsonaro, a vocal unknown politician from a tiny political party who unashamedly declared himself to be a supporter of the military, anti-corruption and a right-wing Brazil.

Incredibly, Bolsonaro’s support grew from almost nothing. Initially disdained by most as being too radical, his rise in popularity surprised everyone.

His position was clearly the complete opposite that of the corrupt PT government and curiously his base grew among the poorer classes. As the elections drew closer, polls varied widely and concerns grew that the electronic voting system, already suspect from the previous presidential elections, was going to be manipulated.

Mr Bolsonaro won. Many of the corrupt politicians were kicked out of office. A major sea change had taken place.

So what is in store?
Most analysts consider the result positive for the economy as Mr Bolsonaro has declared he will reduce the size of government significantly and will encourage foreign investment and privatisation.

His government is expected to meet the challenge of reducing the cost of the national retirement scheme and it’s likely this will be one of the first items that will be tackled. GDP is already being forecasted to increase 3% in 2019.

Surprisingly, Brazil’s financial sector has always been well structured and effective. When dealing with 100% inflation a month, as was the case in the 1980s, money needs to be moved quickly and efficiently. Thus, financial malfeasance (excluding corruption!) is closely monitored.

Write a bad cheque in Brazil and, if it is bounced twice, the infractor’s credit is immediately withdrawn. Car loans, home mortgage, credit cards – everything is frozen. Cheques are thus still widely accepted.

A Credit Suisse report on Brazil suggests inflation and the exchange rate of the BRL (réal) will be stable in a positive scenario for 2019 and 2020.

Brazil is the powerhouse of South America, with a population of more than 200 million, huge foreign reserves Brazil. Plus it has niche markets that can be worthwhile and, while the Portuguese language might seem to be a barrier, Brazil has a long history of trading with English-speaking countries, particularly the US and the UK.

Source: Kevin Smith moved to Sao Paulo Brazil from New Zealand in the mid-1980s after developing export markets for his fertiliser company. He remained there and served as managing director for the South America operations of the Johnson Electric Group and subsequently as chief executive of Guarany Industries, a Brazilian multinational company exporting agricultural machinery to 65 countries.[amazon_link asins=’B07BT9GFKZ,B000S9CGPA,B0797HSLY5,0374280495,B075KN7Z3D,B00D6BQQ0S’ template=’ProductGrid’ store=’gatewaytosout-20′ marketplace=’US’ link_id=’23bf0c52-0ca9-11e9-a734-1581a0f130c5′]