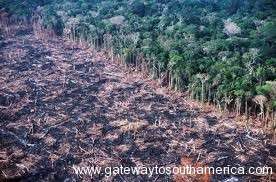 Never seen without his cowboy hat, Mauro Lucio listens to country music as he drives his pickup truck around Paragominas municipality in Brazil’s Amazonian cattle-raising state of Pará while recounting tales of a misspent youth on the rodeo circuit.

But his droll nature belies his central role in a movement that could transform ranching in Brazil, the world’s largest beef exporter, and with it the global meat industry. He is proving that the Amazon can be one of the most productive areas in the world for raising cattle – without the need to deforest.

“The best conditions in the world for producing meat with pasture are here,” Mr. Lucio says, citing the region’s abundant sunlight and rainfall as he shows off the deep green paddocks of his fazenda, or farm, Marupiara.

The lessons from Mr. Lucio and other farmers in Paragominas come as the Brazil’s Senate earlier this month passed a controversial update of the country’s forestry code that is expected to be signed into law by President Dilma Rousseff in the new year.

The code is critical to the future of the Brazilian Amazon, which is not only one of the most important bulwarks against global warming but also one of the ecosystems most vulnerable to it.

The Senate version of the forest code retains a rule that farmers in the Amazon must keep between 50 and 80 per cent of their land as forest. But it waives billions of dollars in fines for those who illegally cleared land before July 2008 as long as they replant some of these areas.

Environmentalists call this is an amnesty that will embolden farmers to deforest again. Farmers argue the earlier requirements were unjust.

But there is one thing everyone agrees on. Brazil, with nearly 28 per cent of the country or 236 million hectares – an area over half the size of the European Union – dedicated to livestock, already has enough land for cattle raising. The problem is that Brazilian ranchers are not productive enough.

“In this area, we could raise cattle production by three times without increasing deforestation,” says Senator Katia Abreu, president of the Brazilian Confederation of Agriculture and Livestock.

This is where Mr. Lucio and the Paragominas farmers come in. The size of Belgium, Paragominas was once notorious for illegal clearing by ranchers, saw millers and charcoal producers. Conflict between these groups over land was so violent, the municipality was nicknamed “Paragobalas” or “Parago-bullets..

Then, in 2008, the municipality was put on a blacklist in a federal government crackdown on deforestation. Farmers lost access to state bank credit – a potentially ruinous prospect.

“Imagine a city on a blacklist – the economic damage, the loss of jobs, the self-esteem of the city ruined,” says Adnan Demachki, the mayor.

He persuaded the region’s farmers to agree to a complete halt to deforestation. This cost about 2,700 jobs in two years in a population of 100,000. A riot followed, in which unemployed workers burnt the local office of an environmental agency. But the moratorium held.

Mr. Demachki and Mr. Lucio, who heads the local farmers’ union, and the Nature Conservancy, an environmental group, began work to get the municipality off the blacklist.

This required Paragominas to produce high-definition satellite images of more than 80 per cent of the properties in the municipality showing areas that need to be preserved or replanted and then placing this information on a state land registry. In 2010, the municipality became the first in Brazil to leave the blacklist.

In the meantime, Mr. Lucio is leading efforts to teach farmers in the region to become more productive. Traditionally, land has been so plentiful on the Amazon frontier that farmers have expanded by slashing and burning new areas of forest. They raise some cattle there before selling the land itself for four times the original price and moving on.

“What they really live from is just moving the frontier wider and wider,” says Professor Gerd Sparovek at the Luiz de Queiroz College of Agriculture in the University of Sao Paulo.

This has left the Amazon with less than one head of cattle per hectare. By contrast, Mr. Lucio’s land, which is 80 per cent jungle, produces more than three head per hectare. He has done this using new farming techniques, such as rotating cattle through smaller enclosures to allow more efficient use of pasture. He is now working with scientists to reach seven head per hectare.

Prof. Sparovek estimates that if all Brazilian ranching were as productive as that of Paragominas, space used for cattle could be reduced by about two-thirds.

“Brazil is exporting very little of its beef, only about 18 to 20 per cent,” he says. “For sure, if it gets more efficient and more productive and with a higher sanitary standard, then it would become more competitive in the global market as well.”