The spectre of some kind of a Chinese “landing” still haunts commodity producers. But in spite of the spooks, this has been a week of good news for producers of soya, Brazil’s third most important export. 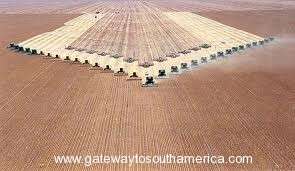 First, Latin America’s largest country more than doubled the volume of soya products it exported in the first quarter of 2012, increasing revenues by 99 per cent to $3.2bn. The early sales from this year’s harvest are setting records.

Second, Brazilian farmers got news that in the US, soya is losing ground to corn in the battle for land. Americans will have more land dedicated to corn than they have since 1937, and the least amount for soy that they have had since 2007. This means room for Brazil to expand production and even better prospects for prices than they already had been this year.

“Both these pieces of news mean that in the long term soya will be more important and more profitable to the Brazilian economy,” Fernando Muraro, at AgRural, an agricultural consultancy specialising in soya, told beyondbrics. “We have all of these supposed problems in China, but yet records are still being broken.”

Brazil, which is likely to become the world’s top soyabean exporter this year, caused prices to spike in early March when traders heard that the country’s harvest would be less than expected this year due to weather problems. But price increases should make 2012 more profitable than 2011, analysts say, and the news from the US opens up space for next year’s harvest to be much bigger.

Brazil plants one crop per year, around September, and is in the process of harvesting last year’s. For sales, the most important quarter is the second. Last year’s sales of soya, mostly to Asia, totalled $24.2bn, around 10 per cent of total exports, coming in behind iron ore and fuels.

The spike in Q1 of 2012 is largely due to more Chinese demand being met by Brazil rather than the US, Muraro says, and Brazil is likely to expand its soya farms by 1m hectares to 26m by the end of the year.

If indeed China does “land” somehow, analysts argue it’s better to be in the business of soya than iron ore, since demand for the latter is more elastic. And in the long term, agriculture is a good bet.