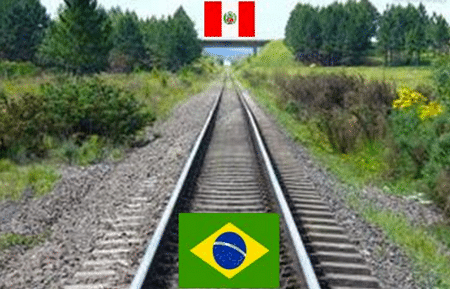 The project of a trans-continental railway, Atlantic to Pacific, using Chinese finance is not a new one. Argentina, Brazil and Chile had also tried to make such a plan work some years ago.

However now it seems a new player Peru is at the forefront of a new plan. Along with Brazil using Chinese finance they are moving forward on a transcontinental railway that will cut across the continent, climb the Andes and connect port cities in the Pacific and Atlantic coasts but excluding Chile and Argentina.

The 10bn dollar new mega project is expected to be formalised during a Latin American tour by Chinese Premier Li Keqiang. The railway is expected to slash the cost of exporting commodities from Brazil to China.

Brazilian grains and oilseeds are a top item on China’s wish list, as are iron and other raw minerals. Agricultural goods like corn and soy currently leave Brazil by sea and have to overcome the South American ‘barrier’ in their trip to the Pacific and Chinese ports. An overland route would shave off a few days from the trip, and lower transport costs.

Technical studies of Peruvian railways are just getting started but those from the Brazilian government indicate a transcontinental railway is likely to stretch from Port De Açu, in Rio de Janiero, through the agricultural heartland of Mato Grosso, and on to Porto Velho near the Peruvian border. Future studies will determine the route through Peru, but it safe to say that the rail would cross the Andes and end in one of the larger port cities like Callao, Mollendo, or Llo Arica.

China has become the top trading partner of Brazil and Peru, overtaking the USA in 2009 and 2014, respectively. It’s also a top consumer of Venezuelan oil and a top lender to the Venezuelan government. Besides Brazil and Peru, Premier Li Keqiang will travel to Colombia, to discuss more infrastructure projects, and to Chile, where China has significant interests in its huge copper imports.

One can not but wonder if this is because the earlier tunnel that Argentina, Brazil and Chile were working on under the Andes linking the Atlantic and Pacific seemed to have stalled.

The Argentine had planned a Bi-Oceanic corridor instead of pushing cargo over a 10,500-foot pass that is often blocked by snow for weeks, building one of the longest tunnels in the Americas right through the mountains in the same way the Olmos project did in Peru to supply irrigation water from the Amazon.

That would make billions of dollars’ worth of Chinese electronics, Chilean wine, Argentine food, and Brazilian cars cheaper and more competitive.

The proposed 3.5 billion dollars private railway project would link train and trucking hubs on both sides with a 205-kioometers-long railway, including twin 51-kilometers tunnels. Construction would take 10 years, but once completed, it could save millions of dollars and carve days off shipping times. The line would link the town of Los Andes in Chile with Lujan de Cuyo in Argentina.

It looks like that the Argentine project along with its Presidential idea to install a Bullet train the has become unworkable.