Minas Gerais banana production in 2012 is around 657 thousand tons, according to the Brazilian Institute of Geography and Statistic (IBGE). According to the Secretary of Agriculture, Livestock and Supplies (SEAPA), a raise of 1% on the previous season is the estimation, after a series of small yearly advances in production. Now producers in the State can count on a new aid to invest in activities, since it’s planned for the second part of the year, the beginning of regular exports of this fruit. 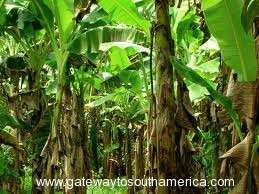 Perspectives of a new sector situation were confirmed by the Central Association of Fruits in the North of Minas (Abanorte), located in Janaúba. According to the organization’s president, Jorge Luis Raymundo de Souza, despite the world economic crisis, farmers are betting on the organization’s activity to place big amounts of banana in the international market, as the preparation of a new fruit export protocol is on the way.

“The protocol is a set of norms or “good practices” for every stage of this activity, since plantation until the shipment to international destinations”, explained the leader. The studies are developed in cooperation with Abanorte, Sebrae-MG, the State University of Montes Claros (Unimontes), the Federal University of Lavras (UFLA), the Federal University of Viçosa (UFV) and Central Exporta Minas, by the Secretary of Economic Development in Minas Gerais (Headquarters).

In the definition of exporting bananas there will be special attention to the quality preservation conditions in the containers, like the packaging care, the temperature and the oxygen levels, among other factors. The businessman underlines that these aspects are of fundamental importance to keep the conditions for banana until they reach their destination in the international market.

The good practices must be followed in the properties and at every later stage, until the banana is delivered to foreign ports and must be defined until the middle to the late part of the year. According to predictions from Abanorte, the first container destined to Europe and Middle East must be ready by November.

Souza believes that the silver banana has conditions to compete with the other known varieties by Europeans, because it’s the best to include in fruit salads. “After being cut, the fruit conserves its original taste for longer and doesn’t get dark”, he explained.

Fruit exports must be in process by 2013 because, according to Souza, some markets have shown special interest in the fruit. “Especially Germany where silver banana tastings were included in the last three editions of Frutilogística”, he added.

The product was also presented with the support of Exportaminas in the last three editions of Gulfood, a food fair in Dubai.