Book for the Week – A ticket to Paradise 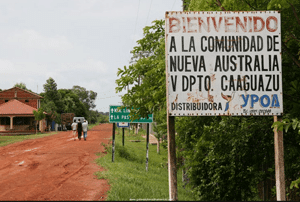 Blue-eyed South Americans with surnames like Smith and McQueen live in the wilds of Paraguay. This is the intriguing story of their ancestors, an idealistic Australian journalist called William Lane, and a colony called New Australia. In 1893, Australian journalist William Lane dreamed of creating a utopia where his socialist ideals could flourish, far away from his home in Queensland.

He enlisted 238 followers and convinced them to sail across the Pacific with him to Paraguay, where he intended to create a paradise where brotherhood would be the order of the day, and hard work would reap its rewards. And then reality set in.

Expecting green and fertile fields, the New Australians found a dustbowl instead; expecting wine, women and song, they realised their leader wanted them to remain abstemious and monogamous. this was not paradise but a kind of hell, and Lane would face open rebellion from his followers. In 2010, Australian travel writer Ben Stubbs made his own trek to the wilds of central Paraguay to discover the remnants of New Australia and to search out the stories of those who stayed behind.

He discovers a series of utopian colonies, including New Japan and New Germany, and their inhabitants, who lead strange double lives, caught between the countries they think of as home and the one they live in every day. Funny, unexpected and fascinating, this is an adventure travel story with a difference.