Attention travelling to Chile: the regulations for the use of foreign cell phones have changed

Chile has implemented a whitelist of cell phones that can be used in its territory; what do you need to know if you visit with your Argentine or another imported phone. 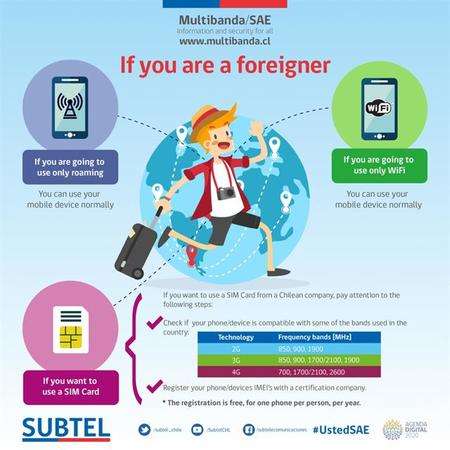 On Saturday, the so-called Multiband / SAE regulation came into forceChile, which changes the way in which the activation of all cellular telephones in that country is allowed; although it is addressed to the Chileans, the modification in the system will also affect all foreigners who travel there from now on.

The new rule obligates one to register a telephone in a white list so that it can be used as such in Chile. This requires validation of the IMEI (the serial number of each telephone, not linked to the line provided by the operator), certifying that the device is compatible with at least one of the frequency bands in use in Chile (bands 4, 7 and 28). The operators of Chile are those that verify the IMEI when the telephone connects to their networks and enable or block their use.

The Chilean users that have phones already in use before the new norm automatically enter that whitelist and are authorized for its operation. The phones that are sold from now on, and that are already included in the Chilean whitelist, will carry a seal that certifies that they are compatible with the networks of the country.

Something like this was proposed by the national government earlier this year, but in an action aimed at prepaid lines , which are usually anonymous (the postpaid are in the name of who pays the monthly payment), as a way to combat their use for crime and resale on the black market. And it is a policy that, with greater or less success, has been implemented in other countries around the world.

The Chilean norm also requires verification that the phones are compatible with the Emergency Alert System (which warns of earthquakes, tsunamis, etc.).

For foreigners in general

For foreigners who go to Chile using a line from another country, things do not change: as the phone is roaming, the person who is in charge of doing the (automatic) validation of the device is the national operator.

But those who for convenience (or to reduce costs) plan to put a Chilean SIM on their telephone purchased elsewhere (in Argentina or in another country) will have to register the device in Chile.

It is a process that can be done in person or through the Internet, and requires to provide the IMEI number of the device in question (this also reaches tablets with 4G, antennas to give you connectivity to a notebook, etc.). You can obtain one free per year; if they are more will have to pay, although the official site does not specify how much money is involved.

Thus, Chile differs from other countries, where it reaches that the phone is unlocked to be able to put a chip and use it without further processing. The intention of the Chilean government is to have total control over the equipment that uses lines in their country.

If the device to be used was acquired in Chile in the last five years and activated in that country does not need to do anything, since it will be entered in the white list of historical IMEIs.