At the Argentine Open Polo, the wealthy rub shoulders with ordinary mortals 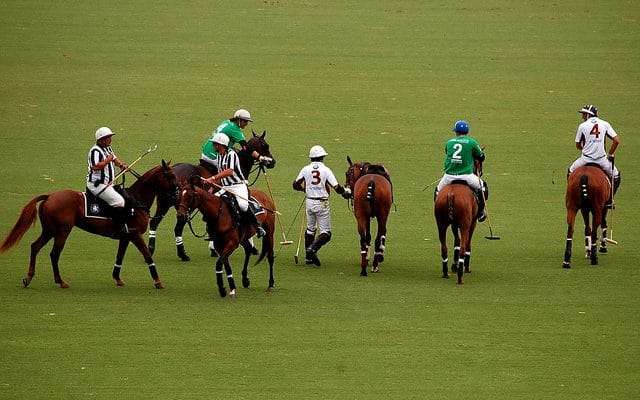 Gateway to South America on 07/02/2019 - 03:31 in All categories of countries are, Argentina Lifestyle, Argentina-General

“It’s a very aggressive game, isn’t it?” The American tourist sitting in front of me sounds horrified. Hardly surprising, really – we’ve just watched a man tumble to the ground with an almighty thud from a galloping horse.

But there’s not a second to spare during the semi-finals of the 125th Argentine Open Polo tournament; play doesn’t halt for a moment.

The world’s top players are all here, battling it out on the hallowed turf of the Campo Argentino de Polo stadium – the so-called Cathedral of Polo – in Palermo, Buenos Aires.

Trainers run fresh horses along the sidelines of the game, the animals ready to enter the fray at a moment’s notice. The eight players on the field (two teams of four) each require up to 20 horses a game; players typically leap from one animal to the next rather than wasting time by dismounting.

Polo is played across three distinct seasons each year in the United States, the United Kingdom, and Argentina. The US may well have the glamour and England the pomp and ceremony, but the Argentine Open played every spring in Buenos Aires since 1893, is the most prestigious game of all.

“It’s the Formula One of polo”, explains one of Australia’s leading players, Rob Archibald. “You won’t see better polo played anywhere in the world. This is one of the best spectacles in world sport. You have the best horses, the best players and the speed is just insane.”

The stadium is barely 10 minutes from the city center, surrounded by the grand Parisian-like boulevards of Palermo and its lush green parks.

Can there be anywhere else on the planet where you sit so close to so many billionaires?

Yet there’s something oddly egalitarian about being here – we may well be watching the top event on the polo calendar but everyone has to sit on the same hard metallic seats in a grandstand where patrons are advised not to wear white pants.

“All the action here is on the field,” says Glen Gilmore, the captain of Australia’s polo team. “There’s no VIP section – none of that Birdcage-type scene. That’s all in Florida and London. Here it’s all about the game.”

This is the same stadium where Kerry Packer watched his last game of polo in December 2005, a nurse by his side. Packer’s six-time Argentine Polo Open-winning team, Ellerstina, lost the final in extra time by a single goal.

“Kerry turned to me and he said, ‘we’ve done alright son’,” says Gilmore. “He died a few weeks later.”

Wallace Ashton, former president of the NSW Polo Association, says the egalitarian nature of this sort of meet had attracted Packer to polo in the first place. “You’d get a sprinkling of billionaires alongside a poor bloody groomsman who’s clearing $200 a week,” he told The Sydney Morning Herald in 2005.

“Of course, Kerry wouldn’t have any cigarettes and he’d get one off the groomsman.”

Nine-time Argentine Open champion Mariano Aguerre is sitting next to me on this occasion, dressed in denims, scuffed Blundstone boots and a baseball cap.

“Polo here is a game for the people,” he confirms. “We’re all equal. There are no suits and ties.”

The face of polo

Even Nacho Figueras, the face of polo the world over (Ralph Lauren chose him to model the brand’s Polo range of fragrances), blends into the crowd. He’s a few rows up but no-one pays him any attention – they’re all focused on 15-time Argentine Open champion Adolfo Cambiaso’s effort to steer La Dolfina into another final.

Teenagers walk the aisles, selling soft drinks, chips and chocolates, just like at many sporting events. The spectators scream each time the player’s thunder up-field; they bring along their own trumpets, drums and clarinets to the game, adding to the commotion.

But there’s civility in the air – as well as the swirling Cuban cigar smoke exhaled by the son of Packer’s former business partner at Ellerstina, Gonzalo Tanoira.

“No crowd anywhere on Earth is more educated about polo than here,” Gilmore says.

Suddenly, the sun stops shining and a cold wind blows in from the Andes, bringing rain. There is no cover, but the crowd doesn’t flinch, not even when the polo field is back-lit by forked lightning. The field goes soft, divots the size of dinner plates fly into the air as the handsome gladiators fight it out for glory.

“You can die playing polo,” Figueras has been quoted as saying.

But all ends well: La Dolfina advances to yet another final (and the sport’s faithful get another opportunity to see polo’s most durable superstar go on to win his 15th Argentine Open).

After the game, billionaires and street cleaners alike gather beneath the stadium at the Johnnie Walker Bar, where the final of the fiery Libertadores football cup on TV gets far more attention than Figueras’ rain-slicked hair. Some line up to buy a cup of Mate tea or Quilmes beer, a popular local lager.

Eventually, we shuffle out of the stadium and onto the streets of night-time Buenos Aires. It’s only a short taxi ride to one of the city’s most coveted restaurants, Casa Cavia – although there’s no chance of getting a table during polo season unless you’ve booked long in advance.

The city’s beautiful people are all here, chatting at the entrance to the former 1920s mansion or seated under chandeliers at tables set with handcrafted tableware.

The gods of sport are untouchable now that we’ve left the realm of polo’s premier global gathering.

I’m reminded of my humble station in life once more..