Gateway to South America on 19/04/2012 - 12:31 in All categories of countries are, Brasil-general en, Chile – General, General of Uruguay, Perú-general en

Selling soybeans, iron and copper ore and other commodities to Asian countries has transformed Latin America over the past decade, stabilizing economies despite worldwide crises and lifting tens of millions of people into the middle class. Now, say officials from both Asia and Latin America, a second gold rush is under way. 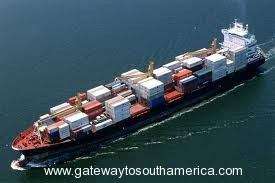 by The Associated Press

Asian investors flush with hundreds of billions of dollars in cash now see Latin America as a top business opportunity, and they’re flooding into manufacturing, construction and other industries, particularly in up-and-coming countries such as Brazil, Peru and Mexico. That’s transforming the lucrative relationship that was based primarily on exporting raw materials to Asia, an arrangement that frustrated governments eager to stimulate their own manufacturing.

Government and business officials meeting this week at the World Economic Forum in Mexico said the investment surge means Asia is poised to overtake the United States and the European Union as Latin America’s top trading partner over the next decade. Asian representatives have been an unmistakable presence at the forum, with South Korean, Chinese and Japanese investors making the rounds at this seaside city’s gleaming white convention hall.

“We’re talking about tens of billions of dollars in just Korean banks looking for a destination,” said Kevin Lu, Asia Pacific regional director of a World Bank Group agency that insures foreign investments against political risk. “When I meet with investors, Latin America is in every conversation about this.”

Already, Chinese investment in Latin America has jumped from a few million dollars just a few years ago to about $15 billion in 2010, with most of the money going into mining and other extractive industries in Brazil, Peru and other nations, said Alicia Barcena, executive secretary for the Chile-based United Nations Economic Commission for Latin America and the Caribbean. Chinese investment in the region jumped again last year, to about $23 billion, Barcena said.

China already ranks among the top three trading partners with Peru, Brazil, Chile and Argentina, and Asian investment in auto and other manufacturing in Mexican industrial cities has greatly expanded the middle class.

“I don’t have any doubt that Asia will soon become the region’s top trading partner,” said Mexican Economy Secretary Bruno Ferrari Garcia de Alba. “In Mexico, we believe we need to get closer and closer to Asia.”

According to the U.N. economic commission, 17 percent of Latin America’s exports went to Asian-Pacific countries in 2010, more than tripling from 5 percent in 2000. Over the same span, the share of the region’s total exports that went to the United States dropped from 60 percent to 40 percent.

Ferrari said Asian-Pacific countries buy 31 percent of Mexico’s total exports, amounting to $110 billion, with that number growing by an average of 20 percent annually over the past five years.

Lu, of the World Bank Group agency, said raw material industries in Latin America are now getting only 40 percent to 50 percent of total Asian investment in the region, while the rest goes to manufacturing, construction and other businesses.

He said foreign money flowing into a new region often first goes into buying natural resources because it’s a simpler business than making things, which requires dealing with labor, setting up supply chains and complying with various government rules.

“The Chinese look at natural resources as easier to manage, while manufacturing and construction is a lot more complicated,” Lu said. “It’s a very natural progression for any bilateral trade relationship to start to become broader, and to move into other areas.”

Hanwha, a South Korean petrochemicals company, is considering manufacturing in Latin America rather than continue to concentrate its production in China, said Sang M. Lee, CEO of the company’s U.S. operations.

At the same time, the company is eyeing the Latin American market, especially as it moves into solar energy, Lee said after a Wednesday morning at the World Economic Forum dedicated to the future of Asian-Latin American relations.

“We need that new production because there are a lot of resources in Latin America, and we need more markets,” Lee said. “We’re just at a beginning stage with this.”

To be seen is whether the rising Asian investment will quiet concerns around Latin America that exporting commodities while importing manufactured Asian goods will ruin domestic companies and leave the region vulnerable. Brazil, in particular, has raised import tariffs on manufactured goods to protect its own industries.

Peruvian Trade and Tourism Minister Jose Luis Silva Martinot made clear Wednesday that despite the economic benefits from Asian trade and investment, Peru still sees China and other Asian countries as competitors.

“We can see they’re up scaling the quality of their products,” Silva said. “Three-quarters of our exports are raw materials. It’s something we want to change.”