Asia and Latin America should have more commercial and investment links. The combined population of the two continents provide a huge enough market for joint business opportunities. These are among the suggestions of delegates at the Asia Latin American Legal Summit. 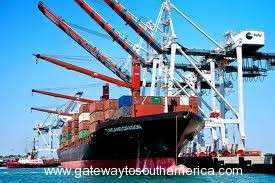 Trade between Latin America and Asia have grown a hefty 357 percent between 2000 and 2010.

For instance, bilateral trade between Singapore and Latin America grew 38 per cent in 2011 to US$30 billion (S$38 billion) from the previous year.

Driven by Asian appetite for commodities, more investments are expected to be heading to that region.

Analysts said Asian investors are largely attracted to the continent for its vast natural resources.

For example, some 120 Singapore-based companies have over 500 points of presence operating in Latin America.

Singapore Minister for Foreign Affairs and Law, K Shanmugam, said: “Asia and Latin America stand out as the bright spots against an uncertain world economy. Both regions were resilient through the recent crises and experienced robust economic growth and continue to grow.”

Among the South American countries that may attract more Asian investments is Brazil.

This especially when the country will be hosting the 2014 FIFA World Cup and 2016 Summer Olympics.

Analysts said there’ll be a lot of demand for infrastructure projects in Brazil and other countries like Argentina, Chile and Peru.

Still, they warn that investing in these latin countries does have its challenges.

The history of high inflation in Latin America countries is still fresh on investors’ minds.

Choo Chiau Beng, Ambassador of Singapore to Brazil, said: “(The) government has to keep interest rate fairly high to keep control of inflation. This high interest rate attracted a tremendous amount of hot money particularly from the North, where US has a very loose monetary policy.”

“In Argentina, taxes overlapping taxes between states and federal, municipals and states, and between territory and it does happen in Brazil. There are some legal firms where the whole 100 member team is specialising in tax. We must not underestimate the implications of tax,” said Mr Choo.

Eduardo Ramos-Gomez, managing partner, Duane Morris & Selvam LLP, said: “I actually do think the tax rates from Mexico down to Argentina are very competitive if measured worldwide. They are not the highest rates that you have in the developed world like Europe or United States. They are not the rates you have in Singapore. They are in the median range.”

Despite the challenges, major exports from Latin America such as petroleum, telecom equipment, iron ore, wine and electronic components may still be an attraction to Asian businesses.