Argentine’s future will be settled in 2015. If you don’t like politics don’t read this 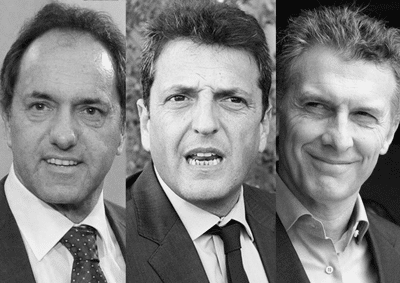 Who will face the Kirchnerite candidate in a potential run off ?

Pretty soon everybody, even those who loathe politics, will start to talk about the next big story: the 2015 presidential elections. So why not start now?

It looks like there will be a three-horse race for the presidency that includes Buenos Aires Governor Daniel Scioli (a Kirchnerite), Buenos Aires Mayor Mauricio Macri (leader of the centre-right party PRO) and the lawmaker Sergio Massa (a ex Peronist who defeated the Kirchnerite candidates in Buenos Aires province last year).

Three candidates for one seat — if only it were that simple. 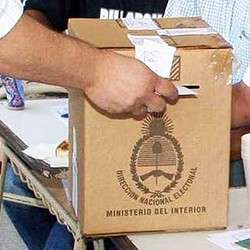 Take the case of Scioli, a member of President Cristina Fernández de Kirchner’s ruling Victory Front coalition. Polls show that it’s likely that the Victory Front presidential candidate will qualify for a runoff next year. Yet Scioli is still not officially the Kirchnerite candidate as he is not trusted to protect the current government from litigation for corruption.

All political parties have to hold presidential primaries (known by the acronym PASO) on the same day in August. Scioli, who has not been endorsed by the president, is not the only Kirchnerite contender. He is one of eight hopefuls.

Scioli is the favourite to win the Kirchnerite primary. But it will be extremely difficult for the Kirchnerite candidate to win a presidential runoff, polls show. That’s why Scioli, and other Kirchnerites, are now insisting that they can score a first round victory in the presidential elections either by garnering 45 percent of the votes or 40 percent with a ten-point difference over the nearest rival. That brings you back to the opposition favourites: Macri and Massa.

Massa, surveys show, is still ahead of Macri. But Macri, who is well-known nationwide because he is the former chairman of the giant soccer club Boca Juniors, has a fighting chance of defeating Massa.

There is a bit of a trend developing: Macri and Massa, because they both head relatively small and nascent political parties, are now trying to woo the venerable Radical Party that has a political machine nationwide second only to that of the Peronist party, which is officially part of the Victory Front.

Not interested in party politics? Well, go away and read something else at your own risk. The future of Argentina might be settled by the manoeuvring that is currently going on in the opposition. Macri on Tuesday posted a statement on Facebook declaring that he is open to using the PASO presidential primaries to compete with hopefuls of other opposition parties currently wooing him like the Radical Party Chairman Ernesto Sanz and the lawmaker Elisa Carrió.

Sanz and Carrió, both technically presidential hopefuls, belong to a centrist coalition known as FA-UNEN. The FA-UNEN coalition includes a group of centre-left parties, including the Socialist Party, that finds Macri unacceptable as an ally. Yet Carrió has insisted that to defeat the Victory Front (and the centre-right faction of the Peronists headed by Massa) the opposition needs to reach an agreement with Macri.

Carrió, a former Radical who is known for her brimstone and fire rhetoric against the Kirchnerites, has since declared that what is really needed is “one big opposition presidential primary.” Some opposition spin doctors are now reportedly toying with the far-fetched idea that even Massa should take part in that “one big opposition primary” to settle who should face the Kirchnerite candidate in the presidential vote.

Yet not all Radicals agree with the idea of joining forces with Macri. Technically Macri, who a week ago had ruled out a possible deal with other opposition parties, is now waiting for an answer from the likes of Carrió to his Facebook statement.

The problem for Sanz is that he is the head of a political party that still belongs to the FA-UNEN coalition that is not in talks with Macri. The Radical Party, which has a history of relishing interminable internal debates, is expected to gather this week to sort out the imbroglio. The FA-UNEN coalition could splinter ahead of the PASO primaries because the centre-left parties are not expected to accept a deal with Macri. The Macri issue could also split the Radical Party.

Massa meanwhile is also hammering out agreements with Radical leaders, especially in the northern provinces. Massa met recently with Senator Gerardo Morales, a Radical who will run for governor in Kirchnerite-ruled Jujuy province. Massa has played down the significance of Macri’s potential agreement with Sanz, a senator from Mendoza province, and Carrió. Sanz, according to Massa, is insignificant because he is a Radical who “has no votes.”

Massa’s camp brags that it has sealed agreements with “vote-getting Radicals” in northern provinces like Jujuy, Tucumán and Formosa (currently ruled by the Kirchnerites).

Massa yesterday was photographed in Corrientes province with Radical Senator Nito Artaza (a well-known celebrity nationwide for his work as a comedian).

It was about time the opposition got some attention. Perhaps this is only possible because the president, after checking out of hospital on Sunday, is currently resting at the Olivos presidential residence to recover from a colon infection. Fernández de Kirchner, even when she officially tweeted on Friday, has been out of sight for two weeks now.

Yet the wheels of government are still turning even with the president on sick leave. Argentina’s delegation to the G20 summit currently taking place in Australia is headed by Economy Minister Axel Kicillof and Foreign Minister Héctor Timerman.

The telcos bill, which critics say favours the telephone companies over the opposition media group Clarín, has also been hotly debated by some Kirchnerite senators (most notably the head of the Victory Front caucus Senator Miguel Angel Pichetto, now evidently a Scioli ally).

Two Kirchnerite lawmakers in the Lower House refused to vote in favour of a bill to establish a university for the Armed Forces, which would be effectively be controlled by the Army chief. Argentina is still haunted by the years of the last military dictatorship (1976-1983) and critics say that the new university will grant muscle to the military.

The so-called Defence University was still approved by the Lower House, a sign that the Victory Front is holding its ground despite losing in all the major districts in last year’s midterms. CFK still controls Congress. The next president is not likely to be that lucky.

The president, despite her health issues, is in relatively good political shape. Polls show that she has a personal approval rating of 40 percent. But the Victory Front lost last year. In 2013 the government was also the target of massive street demonstrations against purported plans to reform the Constitution to allow Fernández de Kirchner to seek a third consecutive term in office in 2015.

Anti-government protesters, of the sort that liken CFK to a dictator, called a demonstration for Thursday night. The protest was a flop. Many observers say that the anti-government street protests have lost their clout because Fernández de Kirchner is clearly on the way out and there are competitive opposition presidential candidates to vote for next year.

Still the government could be hit by more protests next month if demands for a Christmas bonus to compensate for inflation and income tax gather steam.

But most in the opposition seem to be aware that the three-horse presidential race will not include Fernández de Kirchner. Even Scioli is constantly attacked by other Kirchnerite hopefuls for portraying himself as a moderate. A last-minute political agreement between Fernández de Kirchner and Scioli can’t be ruled out if the governor continues to perform well in polls. It hasn’t happened just yet.

Ultimately a lot will depend on the economy in 2015. Kicillof and the recently-appointed Central Bank Governor Alejandro Vanoli seem to be winning the short-term battle to control the price of the black market dollar and there is still a chance that the government will be able to hit good economic times in an election year. But inflation continues to be a thorny issue. Paul Krugman, the US economist who writes for the New York Times, has now declared that the Argentine economy is “overheated” and that the country “really does seem to have much higher inflation than the government admits.”

Foreign investors have no doubts. Another 5 years of a Kirchner government will mirror the rapid decline of the dysfunctional government of Venezuela which has been their model.  Whereas  a Massa or Macri lead government will lead to the biggest boom in business activity since the 1930’s .  These two candidates will be the ones to watch. Both have excellent track records in governance of their regions and would serve the country well.

However don’t hold your breath,  the narcissistic Argentine voters elected Christina Kirchner in twice before with large majorities, even knowing she would lead a government that would nationalise private assets, choke the free press, overlook the political connections with the drug trade, exempt the political elite and K politicians from legal sanctions for rampant corruption at the highest level and use “human rights” as a selective tool.  If that was not enough, the K government has lead Argentina into a second default in a short space of a few years where it still remains, unable to inter-trade with the outside world in a normal way.

Why? Because they naively thought it would result in less short-term social instability. Just as in the 1930’s in Germany, when many thought the same, the penalty for so-called stability has seen the rise of the Campora Movement. A National Socialist like group who have infiltrated the schools and education systems, along with all levels of government employment.

Argentina has been one of the few countries in the world that has, since the beginning of Personism, dropped from being a first world country to a Frontier Economy ( the definition of a Frontier Economy is one which has currency controls) which is still struggling to become an emerging one.

Once you understand this you can see what is at stake with next years elections.