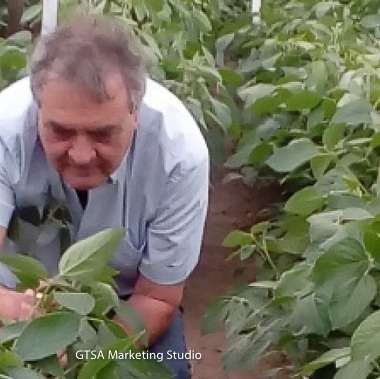 Gateway to South America on 16/10/2018 - 19:13 in All categories of countries are, Argentina-General, Argentine farms

Julio Ferrarotti is a pioneer in the breeding of soy in Argentina. His father registered the first national cultivar of soybeans in ’60. In 1994 he founded a new seed company, named Relmó, together with four partners, including his father and brother. After the sale of the company to an investment fund around 2008, he continued his work as a breeder and headed Prosoja, a non-governmental association that brings together Argentine soy breeders.

We wanted to know his opinion on the state of the art in the breeding of soy in the country.

– How do you rate the work of soybean breeding in Argentina?

JF: Our breeders are on the global podium, without a doubt, along beside their American colleagues. Genetic gain for yield exceed global standards and have a relevant participation in the national soybean productivity. In addition, an Argentine breeding company supplies its genetics to the largest soybean markets in the region and accumulates a global market share of 35%. All these is not by accident. Argentina has a public education system of excellence with a high level of training in genetics; In global forums on breeding, Argentine scientists are considered amongst the worlds best.

-What is the focus or priorities in the local improvement of soy?

JF: Productivity has been the focus since the beginning of soybean breeding in Argentina. But we also have a quick response when pests, biological factors or climate have challenged production. Keep in mind that the country has a large territory from north to south and high climatic variability from west to east. The breeding system provided not only higher yields but also adaptation to a wide range of agro-ecological circumstances.

-What were the most important milestones in soybean farming in the country, in your opinion?

JF: First, the development of a national system for the generation of soybean varieties, which supplies genetics not only for Argentine farmers but also to farmers in foreign countries. Second, having reached the highest genetic gain rate in the world, and third, having reversed the paradigm on the aptitudes of different growth habits. Local breeders have been able to replace the full germ-plasm in two seasons when biotic factors challenged the crop.

-What do you expect from gene editing technology for the next few years? Does the editing of genes close the technological gap that opened during the transgenic years?

JF: There are now some serious companies related to gene editing in the local scene. I see that the editing of genes will be a powerful tool for breeding in the future. I do not speak for the long-term, but in the next ten years, farmers will use new improved varieties using gene editing.

– What role does it assign to the Chinese breeding system, considering that China is the centre of origin of this crop?

JF: Manchuria is the origin of this wonderful crop. Not only are they sitting in the centre of origin, but they have advanced breeding programs, with an excellent scientific level; Last but not least, they have a strategic germ-plasm bank. Chinese breeders are developing formidable varieties for farmers, but agricultural and own-land systems are preventing that genetic improvement from being expressed on the farm. In addition, you should consider that three of the five most important soybean breeding public programs in the US are led by Chinese professionals.

-Finally, and thanks for your time, Julio, do you think that Argentine breeders have access to a similar technology (hardware) that breeders in developed countries?

FJ: The equipment is basically the same here as in the rest of the world. Perhaps it could have been a lack of equipment for molecular technology study. But sooner or later, this technology will come. In addition, in the last 15 years, the public scientific system has been so well equipped and provides support to private companies, covering any possible technology gap.