Argentine is offered an olive branch to join the Pacific Alliance 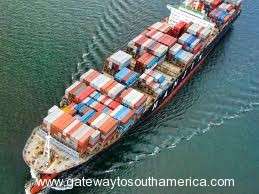 Socialist Bachelet, who came back to power in March to replace conservative President Sebastián Piñera, said on June 20 at a Pacific Alliance summit in the Mexican resort of Nayarit: ‘We have to continue strengthening our Asia-Pacific relationship as well as with other regional groupings. I think that beyond the differences, it’s perfectly possible in the future to create agreements between the countries of the Pacific Alliance and those of Mercosur.”

Her proposal, however, is likely to draw little sympathy from Chile’s more conservative partners, the experts say. Chile is an observer member of Mercosur.

The Pacific Alliance, created in 2011, accounts for some 35 percent of Latin American output.

‘Bachelet’s call comes as a sound balance alternative at a time when powerful Sao Paulo industrial sectors are proposing to quit the purportedly dead Mercosur altogether to come closer to the Pacific Alliance. There is no incompatibility between the two blocs,‘ Aníbal Jozami, the dean of national University of 3 de Febrero said.

Eduardo Conesa, an economics professor at the state Buenos Aires University (UBA) said: “Argentina must come closer to the Pacific Alliance. It would stand to gain a lot if it adopts the Chilean system of a 10 percent import tariff for all products.”

He added that for Argentina it would be fairly easy to adhere to a huge number of free trade accords which Chile has signed with Latin American and Asian countries.

“A custom union requires not just a common tariff but also that those proceeds go to common infrastructure works, something which is not happening in Mercosur, a bloc that encompasses countries with very different interests.

“Argentina needs to open up its economy and, if you will, protect its industry via a sound exchange policy.”

Besides, Conesa said, Venezuela entering Mercosur last year as a full member marked the “death certificate” of the bloc, which can only be considered an imperfect free trade zone, not a common market.

“It has been a brutal mistake. Venezuela has a completely distorted market due to the prices of oil, of which it is a leading producer. Gasoline sells for just cents while other products have very high prices. In a common market prices must be uniform and we in Argentina cannot buy Venezuelan gasoline.”

Raúl Cuello, a former director general of the then DGI tax collection agency, said that Bachelet’s proposal was sound as the times of closed economies “are over.”

‘The technology of Brazil’s industry is in no condition to compete with the rest of the world while in Argentina, imports substitution policies led businessmen to become virtually proxies of governments and seek privileges to have a captive domestic market. Mercosur as a whole is a dinosaur called to disappear in the near future.

“It has become a hunting ground for some industrial sectors that thrive on the basis of advantages that Brazil and Argentina grant each other. Australia, with its booming economy, doesn’t have a car industry, and it doesn’t need one. It is developing on the basis of comparative advantages in the exploitation of its resources.

Asked about the reason for Bachelet’s call, Cuello said: “I don’t think that Chile may need Mercosur to grow. This initiative should be considered in geopolitical rather than economic terms. As Perón (the legendary three-time Argentine president) has put it: ‘The XX Century will find Latin America united, or dominated’.”

Abraham Gak, of the Grupo Fénix think tank close to the government of Peronist President Cristina Fernández de Kirchner, said that Chile is facing difficulties to address its social inequalities and that Bachelet may be aiming to fostering links which allow it somewhat more independence from United States interests.

Jorge Castro, a Strategic Planning Secretary during the tenure of neo-conservative Peronist President Carlos Menem (1989-1999), said that Bachelet’s call for closer ties with Mercosur should be considered within the background of Chinese trade interests.

“International trade today has to do namely with relations with China, a country which last year accounted for 56 percent of the world’s economic growth, followed by the United States with just 15 percent,” Castro said.

“China is the leading trade partner of 144 out of the UN 193 members. This is what is at stake in the Pacific Alliance-Mercosur relationship.”

Chinese President Xi Jinping is coming this week to Brazil to attend a summit of the BRICS emerging economies formed by Brazil, Russia, India, China and South Africa.

He is scheduled to visit Argentina on July 19.

On the one hand, both Chile and Peru have free trade agreements with China, and, on the other, two years ago China proposed Mercosur, namely Brazil and Argentina, to start free trade negotiations.

Mercosur has yet to respond to Beijing’s invitation and it has not done so mainly because Brazil’s economy is stagnant and it has to solve how to grow amid globalization over next decade, Castro added.

As for Argentina, he added, it has one of the three most competitive agricultural sectors in the world at a time of record crops and record soybean prices. “The role of Argentina as a food provider to China is constantly growing.”

Asked about Bachelet’s being a Socialist and hence closer to left-leaning countries as are four of the five full members of Mercosur (save for Paraguay), Castro said:

“This has absolutely nothing to do with ideology. Chile has one of the most open economies, with free trade deals with more than 60 countries.

“What happens is that 60 percent of Chilean exports are accounted for by copper and of that amount, 90 percent go to the Chinese and South East Asian markets.”

Conesa agreed: “Bachelet’s Socialist speech is mainly declamatory. Chile’s economy is wide-open and there is no room for ideological distortions.

“Chile is willing for Argentina to export to the Asian markets through the Chilean port of Valparaíso,” Conesa said.

However, for Argentina it would be relatively easy and cheap to build a deep-water port at the mouth of the River Plate which could be a great exit door for Chilean products. Remarkably, contrary to a common perception, a ship trip from Buenos Aires to Singapore (9,300 miles)is four days shorter than from Valparaíso to Singapore (9,950 miles).

Conesa said that speaking about 200,000 DWT vessels each day costs US$100,000. Furthermore, he added, the Pacific is a rough ocean and tides in Valparaíso vary wildly while the Atlantic is a much friendlier environment for navigation. Of course, that export scheme would require a good train line between Santiago and Buenos Aires. But if it comes into being, it should be left to competitive forces to decide which way is more convenient to go, he said.