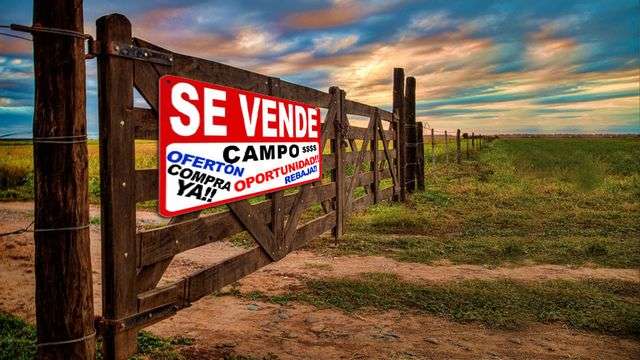 Gateway to South America on 22/05/2019 - 16:46 in All categories of countries are, Argentina-General, Argentine farms

The opportunity of course does have a downside, the marketers point out, due to the prevailing economic situation and the turbulent immediate prospects.

Current farm prices are recording a new low that has been entrenched year by year, as never before over the past five years.

Among the real estate companies in the farm business there is agreement that, from the peak of values reached in 2011, the price per hectare began a descending path that has yet to stop. From that peak, they have fallen more than 25%.

Consulted by iProfesional, farm marketers said that prices “could go down even more”.

In this context, it is imperative to haggle for potential buyers from an accelerated dollar that, with its nuances, has done nothing but deepen the crisis, especially since the middle of last year.

“Currently there are farms on offer and there is some demand, something that has not happened for a very long time. There are still sales that do not close because there is too great a difference between the vendor and buyer. Lately, the offers represent 70 percent of what the owners are asking, “said iProfesional Federico Nordheimer, executive of one real estate company.

“In many parts of the country, poor production results have been caused by at least four consecutive years of droughts, floods, and low prices of some products. With meat for example, many owners feel that the asset they have does not give them the income they expect, or a sufficient profit, and they have put the farm up for sale. This creates great possibilities for those looking to buy a farm “. added Nordheimer.

As for the profile of buyers, this time, unlike others, there is not so much presence of farm syndicates or large funds, but rather it is mainly individual investors.

Whilst there is no firm horizon to the political direction that can be taken after the December elections, the uncertainty is visible, adding a counterweight to the record harvest, which makes farms very attractive due to the recovered profitability.

Below are the current prices per hectare, according to a range of farm specialists consulted:

Although the first part of 2019 denotes a rhythm in terms of operations lower than the beginning of last year, in the segment, they point out that already February closed with a rise of 11 per cent more sales compared to the previous month. In March it is estimated that there was again an increase in sales.

“The market never died, far from it, but what is sure is that farm values ​​have not stopped falling, especially in the past year.” Sellers seeking a quick agreement can accept proposals up to 15 percent below the requested value, from 2016 to the present, the price reduction has intensified, “said Maurette.

Outside of agriculture, José Cardín, from the real estate firm Cardín Campos, recently stated that farms destined for cattle breeding were a preference for buyers.

“Livestock is recovering from many years of bad government policies and has a lot of room to grow, but it’s a process that will take some years more. It is a good time to buy, but vendors need to give financing for three, four and five years “he said.

The decrease in the price of farms has also been observed by organizations such as the aforementioned Chamber of Rural Real Estate (CAIR).

In this sense, a report from CAIR states that “the farms continue their downward curve, trying to adjust to the current profitability of the sector, until stabilizing at a lower level, not imaginable a year ago, which enhances a possible future revaluation of the land if Argentina reaches a desired economic and political stability, which is difficult to achieve in electoral years “.

“We have registered, based on the contribution of our increasingly wide network of associates, that rural real estate activity continues to be maintained at reduced levels of activity, with operations that have been concentrated mainly in a range of between one and three million US dollars. “he says.

On the other hand, the CAIR recognizes that prices, except in the agricultural core zones, where a certain demand is always maintained, have a certain tendency for greater flexibility.

“There is a clear increase in the number of properties offered for sale, largely due to the extension of the time limits for commercial management, which in the cases of areas located in marginal zones are usually extended for several years as a result of the very little interest by investors in these areas.

The year 2018 for the marketers of productive farms concluded with a decrease of more than 10% with respect to the previous period. December last year closed with an annual fall of almost 30%.

“Financial income remains more attractive both abroad and in local loans, competing heavily with productive investments,” they remarked from the CAIR board of Directors.

To conclude: “As the economic and political situation becomes predictable hereafter, a sustained recovery in the market for buying and selling farms is expected.”