At the CREA Tech conference,  held in Cordoba, Argentina there were a large number of new tech startups, applications of robotics and advances in genetics on show.

A wave of new technological developments, outside the traditional technology of inputs, is making its way into the agriculture and pastoral sectors. It brings not only agronomy skills but above all else, electronics and mechanical engineering. Those companies and individuals who have mounted that wave are mostly led by young people between 30 and 35 years old who put together startups that concentrate on app, web and sensors to monitor everything from crops, animals to irrigation systems.

There is another wave coming and it is that of applied robotics. There is already in the new world of robots that are used in weed control or cattle care, for example, but in Argentina, there is a wave of interest in this new technology both in its development and usage.

In addition, it comes with another wave of other disruptive technologies that pose more opportunities to develop new products. In that group are gene-editing technologies that allow you to cut a specific point of DNA sequences, focus on something specific and achieve products that do not have to go through the long process of regulating transgenics.

Of all this, of these different waves that have come as unstoppable, that leave in many cases of the known participants on the outside as they are carried out by new players. These were the subjects spoken about during the Congress CREATech, that was attended by more than 4000 attendees. There were attendees from all over Latin America and the world.

Federico Bert, the leader of research and development of Aacrea, contributed a data that reflects the magnitude of the changes with respect to the new technologies in this country. “We have seen in the last year and a half the appearance of 150 startups linked to agro solutions with developments that concentrate on app, web, sensors etc,” he said.

They are the new entrepreneurs, with 90% of the young people aged between 25 and 30 years old, who are grouped from two to five people and in interdisciplinary groupings. “We see a lot of agronomists who have come together with computer engineers for developments. In these companies, many live in the interior of the country and do not have physical offices and warehouses, but they are connected to each other,” Bert said.

As reported separately, within this framework of the Congress at CREA Lab the presented 18 cases of this profile of companies ranging from automation, marketing to network platforms.

Bert argues that there is more and more diversity and this is good for the farm producers themselves. “You used to have four or five big companies that developed the technology, but now there are hundreds of them and they decentralize the technology,” he said. For Bert, Argentina is currently leading the generation of new ventures. There is, however, a need for more rapprochement between investors and new entrepreneurs. They are forming more incubators than they have the capital to support them. Three years ago there was one accelerator and Bert now counts about ten. In some of them, there are farm producers that put money their own money in to promote these enterprises.

The horizon of what can be done is infinite. Jaap Rommelaar, a Dutch expert in international business management who worked in the Nidera marketing table in Argentina, seems to have stopped at this when one of the partners now generated the idea of measuring the commercial quality of cereals and oilseeds with images. With ZoomAgri they developed an application that takes a photo for analysis. But they are also working to make stockpiling and the industry do the same with boxes that take photos.

In ZoomAgri, whose other startups the agro electronics engineers and agronomists mixed grains are big players in the market all the time and get images with that box that takes pictures. This machine is “taught” to work with images. In addition, they implement artificial intelligence and deep learning algorithms to identify and measure sample quality. Percentages of broken grains, foreign matter, colored grains, live insects, chamic, for example, can be determined. They started with soybeans, corn, wheat, barley, and sunflower and will now work with different charging models for technology.

“We aim at a precise economic analysis (not using the eye) with a consumer anywhere receiving online the results, ” he said. “I did not choose to go back to the corporate world (after leaving Nidera), but this is what makes my blood boil with enthusiasm. If you have something interesting in your hand, you quickly get to the market,” enthused Rommelaar.

Alejandro Repetto, a computer engineer, has no doubts that for Argentina there will also be more opportunities for robotics. In the context of an initiative in which there is interaction with public and private organizations, it is working on a robot to combat mechanically resistant weeds. Once weeds, by satellite, drone or predictions based on weather, a robot can be sent to the site to control it. There it could crush it by heating it with a laser to neutralize it, cut it or pull it out.

In Australia, Germany, and USA. there are already antecedents in this area. For now, here it is a work in development and to have a first national prototype you need $ 500,000 or more. If you get that money, in seven months the product would be ready and then working field tests within a year.

“We are thinking of small robots that work like a honeycomb, each locally, but ending up covering a large area,” he said.

In CREA Lab, the company Eslava presented an experimental autonomous agricultural vehicle with a spray module.

Genetic editing, which allows for the editing, correction, and enhancement of specific nucleotide sequences in DNA in a simpler, accurate and even economical way, began in the late 1990s but has had a revolution in the last four years. With this technology, whose products should not follow the process of approval of transgenics, there are already in the USA. commercially an edited colza resistant to sulfonylureas and mushrooms that do not turn brown.

“In less than five years there will be more products for gene editing,” said Esteban Hopp, INTA’s international benchmark in agrobiotechnology and genomics. High oleic soybeans may come that do not have to go through regulatory GMO times.

Hopp noted that there are many companies working with these new technologies and that allows smaller firms a capacity for action that is no longer exclusive to large companies.

The Challenge of Cultivated Meat

Mark Post appeared defiant in a video that was broadcast at the CREA Tech conference. “Much of this production will change or disappear,” he said of livestock production and the meat industry as they are known today. Professor and Chairman of the Department of Physiology at the University of Maastricht (Netherlands), Post created the cultivated beef and introduced in August 2013 the world’s first hamburger from cow stem cells. 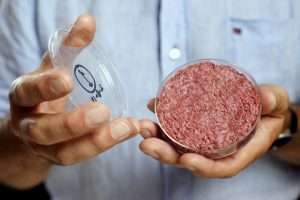 For Post, in three to four years this product could reach the restaurants and in seven years be in the supermarkets. Despite the optimism, in a part of his talk through video admitted that it will take decades for this industry to develop. “It will take time and investment,” he acknowledged.

The reasons for making this bet are different. They are because it is expected that there be a 70% increase in the demand for meats up until 2050 until it can then will need to reduce the emission of gases from livestock. Cultivated Meat will use fewer natural resources for the same amount of meat and have no concerns from the growing health-conscious vegan vegetarian and animal welfare sections of society.