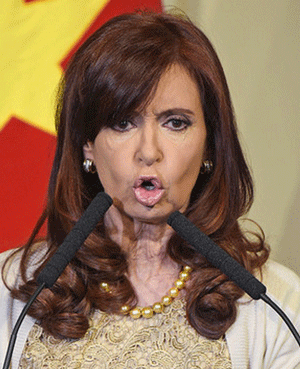 It is sometimes said that the world has four types of economy: developed, developing, Japan’s and Argentina’s — because of a seeming South American economic exceptionalism becoming apparent again.

China’s economy is slowing. Investors have dumped emerging-market assets. In Latin America, presidential approval ratings have collapsed amid the downturn.

Yet Argentine bonds have returned 6 per cent since the start of August, while approval ratings for Cristina Fernández, Argentina’s populist president, are solid at 48 per cent in recent polls, despite a flatlining economy and estimated inflation of 20 per cent.

Confused? The reason behind the apparent discrepancy, analysts say, is that investors have bought Argentine bonds hoping that October’s presidential election will usher in a new administration: one that dismantles the unsustainable economic policies that have buoyed Ms Fernández’s two terms in government and the previous administration of her deceased husband, Néstor Kirchner.

Ms Fernández is popular because she is “a woman, a widow, and is leaving,” said Marcos Peña, an adviser to pro-business presidential candidate, Mauricio Macri. Ms Fernández cannot run in this election.

Whatever the reason for Ms Fernández’s relative popularity — twice as high as Chilean president Michelle Bachelet’s, and eight times more than Brazilian president Dilma Rousseff’s — her popular standing may make it hard for the winner of the October 25 vote to reverse Ms Fernández’s interventionist policies.

“Argentina will clearly change . . . but the changes will not be as drastic as global observers hope,” warned Stratfor, the risk consultancy, in a September 1 note to clients.

That could dash the hopes of Argentine debt investors, such as George Soros, that Buenos Aires will settle its long legal fight with holdout creditors and rejoin international capital markets soon. Ms Fernández calls the holdouts “vultures”.

Her “relative popularity amongst the poor expresses broad support for a good part of the policies implemented during her tenure,” said Sergio Berensztein, a political analyst.

That is even true of the economy, which grew rapidly in the 2000s but has since ground to a halt. Although it is not growing “it is stuck at a relatively high level and the private sector hasn’t fired people, waiting for an improved scenario,” said Miguel Kiguel, head of Econviews, a consultancy.

That “relatively high level” could drop suddenly, though, if the next administration is forced to deal with a growing mess that includes declining foreign reserves, a soaring budget deficit financed by money-printing and an estimated 17 per cent drop in the value of exports in the first seven months of this year versus 2014.

“This situation isn’t sustainable at all,” said Fausto Spotorno, chief economist at Orlando Ferreres & Asociados, a consultancy. He points to 4m Argentines, almost a quarter of the working population, with public sector jobs — up from 2.8m six years ago.

Spending on subsidies has also soared from 0.8 per cent of gross domestic product in 2006, the year before Ms Fernández’s first term, to 5.1 per cent last year, estimates Empiria Consultores. Curbing those subsidies will be politically difficult.

“For most people, the president’s final scorecard isn’t going to be low,” said Eduardo Levy Yeyati, head of CIPPEC, a think-tank. “The social and economic perception of the last few years is largely positive.”

Ms Fernández is popular because she is a woman, a widow, and is leaving Marcos Peña, an adviser to Mauricio Macri

Ms Fernández gave a defiant speech at the Buenos Aires Stock Exchange late in August. Standing next to Daniel Scioli, governor of Buenos Aires province and the presidential candidate leading the polls on a platform of continuity, she stormed that none of her policies needed changing — especially not the removal of currency restrictions that have supported the peso.

While Brazil’s real has dropped a third this year, Argentina’s peso has slipped just 8 per cent, although at the cost of foreign reserves that dropped $342m in August to $33.6bn. The gap between the official rate, 9.3 pesos to the dollar, versus 15.5 on the black market, has also widened.

“The average Argentine sees the value of the dollar as an estimate of how the economy is doing,” said Matías Carugati, chief economist at Management & Fit, a pollster.

Still, if the deteriorating economy has done little to dent Ms Fernández’s popularity, neither have numerous corruption allegations swirling around her administration or recent charges of voter fraud at a gubernatorial election marred by violence and burnt ballots.

Argentina’s “high level of ideological polarisation leads many to see any claims of wrongdoing [by Ms Fernández] as a conspiracy,” said Mr Levy Yeyati.

In the end, though, the president’s relatively high ratings may be because many Argentines nostalgically recall how the past 13 years under Ms Fernández and Mr Kirchner were boom times, marked by improving social conditions, as they were across South America. Now they wish her a fond farewell.

Source: Part of an article from the Financial Times