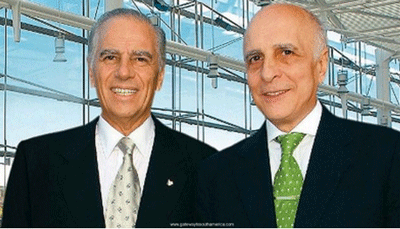 The total fortune of the 15 wealthiest Argentines has been estimated at 26.85 billion dollars, falling just shy of the 27.679 billion dollars currently in the Central Bank’s foreign reserve account, according to a list of the country’s richest people published recently by the local edition of Forbes magazine. The difference being this money is real whereas no one believes the Argentine Central Bank actually has 27 Billion Dollars in Cash. It is a little like the US gold reserves. It only exists in someone’s mind. Ask Germany who would like its Gold Reserves stored in the US Treasury returned and cannot get them.

Alejandro and Carlos Bulgheroni, ( Carlos died in 2016) the owners of the Bridas Corporation, which holds a stake of Pan-American Energy, jointly top the list with 5.88 billion.

Pan-American Energy, which is 60% owned by BP with the balance held by Bridas and Chinese company CNOOC. The firm pulled down the curtain on 2013 having drilled 180 new wells at the Cerro Dragón oil field in Comodoro Rivadavia, also consolidating the establishment of Axion, the company they set up to run a refinery in Campana and petrol stations they purchased from ExxonMobil in Argentina, Paraguay, and Uruguay.

In second place with 3.4bn, Forbes lists Paolo Rocca, the president of the Techint Group’s Tenaris and Ternium, the world’s leading producers of seamless steel pipes chiefly for the oil industry. Rocca holds major stakes in Techint with his older brother, Gianfelice, who resides in Italy, which they inherited from their father and Techint founder, Roberto Rocca.

Corporación América owner Eduardo Eurnekian was the fourth richest in 2013, declaring 2.2 billion. The group paid 200 million for an 81% stake in oil company CFC.

Jorge Pérez, the founder of The Related Group, a premier real estate developer established in 1979 that primarily operates in South Florida, was fifth, worth 1.55 billion. He is a longtime friend of North American President Trump building many of his properties.

María Inés de Lafuente Lacroze, the only heiress of Amalia Lacroze de Fortabat, is the richest woman in Argentina, possessing several works of art and properties in Argentina, the United States and Uruguay, which bring her total worth to 1.26 billion.

Not far behind in eighth place, Forbes said Arcor CEO Luis Alejandro Pagani had amassed a total net worth of 1.25bn by the end of last year. Arcor, worth an estimated 2.28 billion with annual sales that rose to 14bn and a net profit of 44m in 2013, is the largest global producer of sweets.

Still above the billionaire mark, Roberto Urquía — one of the owners of Aceitera General Deheza, the largest soybean oil exporter in Argentina— was in ninth place with 1.2 billion, followed with exactly the same sum by Edith Rodríguez de Rey, the widow of the late Luis Alberto Rey, the engineer who founded oil company PlusPetrol and Papel Prensa.

Jorge Horacio Brito (born July 23, 1952) is an Argentine banker and businessman, CEO of Argentina’s largest bank, Macro Bank (Banco Macro). He was also the President and Chairman of Argentine Banking Association (ADEBA) from 2003 to 2016. As a businessman, he has investments in real state through the firm Vizora, in agriculture and livestock (with the companies Inversora Juramento, Frigoríficos Bermejo and Cabañas Juramento) and wind power, renewable energy generated by the corporation Genneia Inc. In 2016 he won the Fortuna Lifetime Achievements Awards because of his trajectory in Argentinean business community. In 2017 Forbes Magazine placed Nº. 1.567 of the World’s Billionaires list. In Argentina, he is the 7th richest businessman in the country.

Eduardo Francisco Costantini (born September 17, 1946) is an Argentine real estate developer and businessman and the founder and chairman of the Museum of Latin American Art of Buenos Aires (MALBA).   During the ‘80s he became a stock-broker and then president of Consultatio Bursátil SA.[3] Between 1991 and 1994 he was the Vice-president of Banco Francés del Río de la Plata. In 1991 he also founded Consultatio Asset Management, a company exclusively devoted to managing investment funds mainly in Latin America. That same year he founded Consultatio SA, a company devoted to the development of large scale real estate projects. Costantini had carried out real estate projects outside Argentina. He built Las Garzas complex in Rocha, Uruguay, where he also invested 10 million dollars in the construction of the circular bridge –designed by Rafael Viñoly– that connects the departments of Rocha and Maldonado. In 2009 he founded at the United States Consultatio Real Estate, responsible of the development of Oceana Key Biscayne – a complex of exclusive apartments and villas facing the sea- and Oceana Bal Harbour, which will be finished at the end of 2016. Both projects are placed in Miami and will include art pieces by internationally renowned artists, such as Jeff Koons. He has a net worth of no less than 1 billion.

Transport logistics magnate Alfredo Román was eleventh with 1.11 bn, while Insud group head Hugo Sigman was the last billionaire on the list with 1 billion.

Helena Revoredo Delvecchio (born 1947) is an Argentine-Spanish billionaire and the chairman of Prosegur since 2004.

Real estate development lawyer Samuel Liberman came in at thirteenth with 950 million, followed in fourteenth by Enrique Eskenazi with 850 million, the head of the Petersen Group.

Carlos Blaquier and family take up the last slot on the list with a net worth of 840m. The businessman holds a 90% stake in sugar company Ledesma with the mother of his children, María Elena Arrieta Wollman.

The Wertheins are an important family of entrepreneurs in Argentina. The Werthein family, headed by Leon Werthein, his wife Raquel and five of their children emigrated to Argentina from Bessarabia in 1904 and settled in rural Miguel Riglos, La Pampa Province.  Three of Leon Werthein’s sons; Gregorio, Numo, and Noel (1911–2002), started a company in 1928 dedicated to managing agribusiness, and have maintained farming interests in Argentina ever since. Gregorio, Numo y Noel Werthein SA was founded in 1959 and includes extensive agricultural and fruit processing holdings. Its agricultural holdings include over 100,000 hectares (250,000 acres) of land and over 45,000 cattle, distributed in the Provinces of Buenos Aires, La Pampa, Santa Fe and San Luis. They produce wheat, corn, sunflowers, soybeans, cotton, popcorn, candy, sunflower oil, black beans, red beans, and beef as well as a Ranch division that specializes in developing high-quality genetics in the following breeds of cattle: Angus and Hereford (south), Brangus and Bradford (North). The fruit area produces apples, pears, peaches, apricots, strawberries and plums in dried form and as a fruit juice concentrate.

Argentina is often misunderstood in that while it is not unusual for the government to go broke by the irresponsible spending of money they don’t have, the upper and middle class has not. Mortgages are very rare in Argentina making the real estate market very stable. After each balance of payments crisis, the country will if it does defaults bounce back again quickly. Not much comfort for government creditors but it has all happened so many times before one wonders why they would lend in the first place.

Note: This list is somewhat out of date and with the change of government in 2015 there is likely to be some removals and additions when we next update it. New additions are likely to be from the technology sector.

In 2018 there are signs that the Macri government is more serious than earlier ones at rebuilding the broken institutions and removing corruption from a society that has lived with it for decades. This should result in the rebuilding of wealth over time.