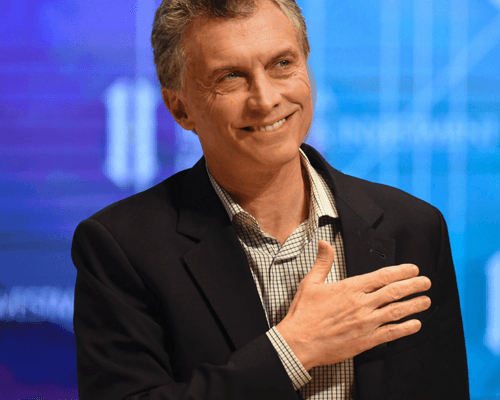 Except in times of war, few politicians have achieved great electoral success by telling voters to sacrifice living standards today for the sake of a better tomorrow. But in a surprising turn of events, voters in Argentina have just given an unexpected endorsement to this message, which has been the guiding logic behind the anti-populist policies of President Mauricio Macri.

On Sunday, Argentina held primary elections ahead of the Oct. 22 midterm legislative polls. It wasn’t supposed to be a very momentous event, but the results, as it happened, came loaded with significance. Voters didn’t just give a boost to Macri’s governing project. They also showed that Argentina—a country with a history of politics driven by personalities, emotions, and short-termism—has developed a new level of political maturity.

After one-and-a-half years of Macri’s bitter economic medicine, and with former President Cristina Fernandez de Kirchner on the ballot for a Senate seat, few expected Argentineans to give a hearty vote of confidence to Macri and his Cambiemos—or “Let’s Change”—coalition. But that is exactly what they did.

In Argentina’s system, all the parties run collectively in the primaries, with voters allowed to choose any candidate from any party in their district. When the ballots are counted, the top vote-getter from each party becomes its candidate in the general election for that district. That means that candidates don’t need to win the primary to move through to the next round. Still, because voters are choosing candidates from among all the parties, the composite primary results are something of a crystal ball, a look into what the voters will do in October.

The weekend’s results came as a blow to the opposition, and especially to Fernandez. Macri’s Cambiemos exceeded all expectations. Unless something dramatic happens in the next couple of months, it will become the largest party in Congress, a sure bet that economic and social reforms will gain strength in the second half of his presidential term. It would also be a reliable indicator that Macri will be a formidable candidate for re-election in 2019.

The race that injected excitement into what otherwise would have been a dry political exercise was the one in which Fernandez appeared. Her announcement in June that she would come out of retirement and run for a Senate seat sent financial markets tumbling and filled the air with uncertainty.

By entering the race, the former populist president turned the primaries into a barometer of Argentina’s political sentiment. Voters had the opportunity to express their view on two competing political and economic philosophies after having seen both of them put to the test.

Fernandez and her husband, the late Nestor Kirchner, who was president for two terms before she was elected, enacted policies that were the embodiment of crowd-pleasing populism. Her economic agenda was characterized by short-term, direct responses to problems affecting the population. When prices rose, she ordered sellers to freeze them. When statistics showed inflation climbing, she fired the professionals who calculated the numbers and then stopped publishing them altogether. She even tried to ban private economists from reporting them. When poverty rates rose, she sharply boosted government spending on social programs without regard to available resources. The policies brought some short-term relief, but they created macro economic havoc and ultimately more poverty.

Fernandez’s poor performance throws cold water on her chances of regaining the presidency, and it diminishes her potential to become a leader of the opposition.

In 2015, when Macri won his surprise victory ending 12 years of rule by the Kirchners, he inherited an economy in shambles. Purchasing power had eroded as inflation spiraled. Productivity fell as producers saw profit margins fade. And the country’s reserves started dwindling in tandem with an exploding deficit, while lenders were still loath to extend credit to Argentina due to its sovereign debt default in 2001.

Macri quickly instituted the kind of reforms that are politically radioactive. He slashed subsidies, which had the initial paradoxical impact of spiking inflation. He settled the claims of foreign lenders that Fernandez had demonized as “vultures,” reopening Argentina’s path to international credit. He cut government spending and started lifting restrictions on businesses, aiming to make the country more appealing to investors and job creators.

The moves were all aimed at long-term growth but, as he predicted, they brought short-term hardship. In the last year of Fernandez’s presidency, the soaring fiscal deficit reached 5.4 percent of GDP, a 73 percent increase over the previous year. To tackle a looming fiscal catastrophe, Macri made sharp cuts that brought the primary deficit to 4.6 percent of GDP last year. But the countercyclical policies, along with tightened monetary policy, predictably contracted the economy, which shrank by 2.3 percent in 2016. Unemployment was rising; inflation remained high, and the benefits from all the painful measures were nowhere in sight.

Macri promised restless Argentineans that the pain would start to ease by the second half of the year. And then, green shoots started sprouting. The economy appeared to limp out of recession.

When Fernandez decided to run again, the move was viewed as having two goals. The first was to gain the immunity from prosecution that a Senate seat confers—she is under indictment on corruption charges. The second was to test the waters for another run at the presidency in 2019.

On Sunday, voters gave her something of a shock. Pollsters had predicted an easy victory in the primaries. But when the votes were counted in the populous Buenos Aires province, she had essentially tied with her main rival, Esteban Bullrich, the former education minister endorsed by Macri and his bloc.

Since Fernandez is essentially running as an independent, under the banner of her new Citizens Unity party created for her Senate run, she didn’t need to win. She will be on the ballot in October, and she is very likely to become a senator. But her poor performance throws cold water on her chances of regaining the presidency, and it diminishes her potential to become a leader of the opposition.

As for Macri, he had adjusted his message of austerity during the campaign, promising to target poverty and corruption, and boost education. But his message remains a sober one. On hearing the results, he called on all Argentines to come together and “converge on long-term planning for the country.” That, in one sentence, is the opposite of populism, the opposite of Kirchnerism.

The primaries showed a mature electorate in Argentina, one that is sure to face more unpleasant reforms and less government largesse in the years ahead—but also one that is counting on tangible economic growth to make up for all the pain.