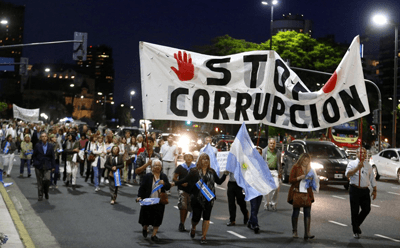 Gateway to South America on 18/01/2015 - 14:25 in All categories of countries are, Argentina Lifestyle, Argentina Mendoza, Argentina-General

In the city of Mendoza, the continent’s wine capital, a group consisting of over 5,000 growers, winemakers, and vineyard employees packed the city streets with tractors, poured wine on the steps of city hall, and chanted and waved signs with the aim of stopping the annual Fiesta de la Vendimia.

The Fiesta de la Vendimia is the harvest festival, a world-renowned highly attended event. It attracts global attention, spendy tourists, and money to the province. This is of great importance and benefit to both the local and national government. So why would the actual wine industry participants want to stop a festival celebrating wine?

The protest is in response to the government’s failure to act on promises to financially assist the struggling sector. Earlier in the week both national and local politicians made promises to provide the sector with financial aid to assist with this year’s harvest, due in a matter of weeks. President Cristina Fernandez de Kirchner committed to provide ARS $50 million from the Mendoza Fiduciary Trust to buy up excess stock and stop the price slide that has resulted from a steep fall in exports. What she plans to do with that much wine I do not know. But shocking no one, the government has not come through and assisted members of the community hit hard by the effects of the country’s self-inflicted crisis.

The Argentine wine sector has been hit by falling exports, high inflation, tight credit, and an unfavorable exchange rate. In 2013 exports fell for the first time in a decade from US $918 million to US $866 million. 2014 estimates come in at US $823 million. Costs have increased for industry essentials including bottles and barrels, and the difference between the parallel and official exchange rate has exacerbated the problem.

To put some numbers on it, imagine a wine producer exports 100 bottles of wine for US $15 apiece, net of taxes. Overseas their earnings would amount to US $1500. But laws force these exporters to bring these earnings back at the official rate of ARS $8.50 per USD, so that US $1,500 becomes ARS $12,750 compared to the ARS $20,250 these dollars have on the parallel market. Quite the loss in purchasing power.

A recent article that I suspect to be working on old information reports that in the past four years, grape prices have risen 10-15% whereas production costs have gone up by 80%.  A liter of basic red wine sells for ARS $2.64 but costs ARS $4.50 to produce. I’ve never seen even the swilliest of swill cost anywhere near that little, but I assume that with inflation the idea still stands. These guys are making less than their production costs selling in the local market, local prices don’t rise fast enough to compensate for cost increases, and exporting requires scale that small producers just don’t have.

While a glut in the wine market sounds like a fun time, it’s actually hurting producers to the point where they don’t have the money to harvest the grapes required for next year’s production. And where the government evidently has money for an international wine hoopla, they haven’t ponied up the funds promised to assist with the harvest.

What the government should do is fix the economy’s endemic problems that cause Argentine local purchasing power to be so low, ease administrative constraints thus allowing more producers to export at higher prices, and fix the ridiculous parallel currency problem so exporters could bring returns back to the country and reinvest in what should be one of the nation’s leading industries.

Argentine wine producers should be leading the world, not be forced to drive tractors in circles through the city and pour wine on steps. The government being required to bail out the wine industry, of all things, is a perfect example of the ripple effect of short-sighted, self-serving populist policies that hurt industries and the people they employ. In Argentina’s wine industry, that’s over 400,000 people. Awesome.

So while typically I’d take in this government’s latest economic folly by putting up my feet and enjoying a nice glass of Malbec, the situation of these 400,000 humans has put a sour taste in my mouth.