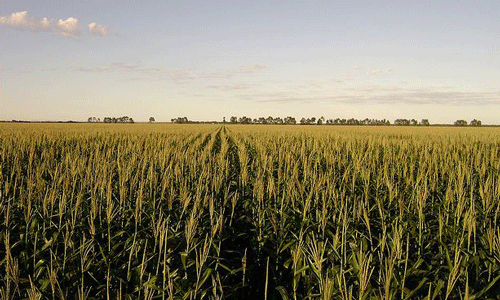 Gateway to South America on 14/09/2018 - 20:43 in All categories of countries are, Argentina-General, Argentine farms

Argentina’s plummeting currency ( AR Peso ) is set for buffering from bumper wheat crops as it becomes one of the few countries to emerge from a 2018 harvest with a sizeable yield.

Several top producers from around the world, including Australia, the US, and much of Europe, have struggled to deliver high yields in the face of a difficult climate involving droughts and extraordinary heatwaves.

This has caused Asian countries such as Indonesia, which ranks as one of the highest purchasers of wheat worldwide, to source stocks from other regions. Argentina will be one of these key wheat sources.

The South American nation is likely to see a boost at just the right time, as any additional exports should be able to prop up its USD coffers somewhat.

Argentina has been finding it difficult to stem serious inflation in its economy, which has led to a drop in its local currency the AR Peso.

Inflation now stands at 34.4% for the year, which is one of the highest rates globally. August showed an increase in inflation of 3.9%, which happens to be the highest in 2018 so far.

The peso has now dropped by over half its value this year alone as Argentina’s talks with the IMF to secure bailout funds has yet to appease investors regarding the halt of its currency slide. Argentina has asked for a $50bn loan, which it hopes will stimulate the economy and allow it to find some growth. The government has struggled to win over its citizens with the idea, as protests keep mounting.

This is due in part to the implementation of austerity measures aimed at bringing the deficit under control, but the effect on the labour market has led to unrest among the public, which blames the government for the weak economy.

The unexpected demand for wheat yields from around the world will, therefore, deliver a vital boost for Argentina’s economy as Asian countries look to find a reliable supply for the next year until crops in expected markets rematerialize.

Analysts and traders have therefore assessed that Argentina’s wheat crop will come to Asian countries aid from December onward.

One trader noted that Argentina is one of the few countries worldwide that is “looking at a bigger crop” when many typical export countries have reduced yields.

The wheat demand should soon stand at around 304 million tonnes, with Asia importing 57.5 million tonnes of the overall total. Its imports have risen by 50% in the last eight years.

Russia has found it difficult to match last year’s record yields of nearly 85 million tonnes, and forecasts predict a 14-million-tonne decrease this year. Australia has faced a similar fate, as long-lasting droughts across the East dropped its output to a ten-year low.

Poor yields elsewhere are Argentina’s gain, with some traders suggesting that it could hit a 19.5-million-tonne output this year compared to the 11.3 million tonnes that it recorded three years ago.

Russia currently has the cheapest wheat prices at $250 a tonne. Argentina came in at $275 and Australia at $290.