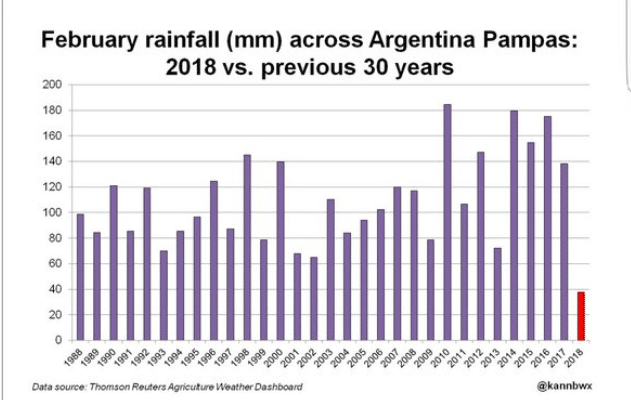 Sentiment on Argentina is running hot. Really hot. Unfortunately for the optimists, sentiment isn’t the only thing running hot in Argentina. The country is experiencing its worst drought in 30 years – an event that is already causing GDP estimates for this year to get dinged. More on that in a second. But first, let’s look at the positive view:

The first of these is that foreign capital is coming back to Argentina. This is certainly true. They further suggest that capitalist president Macri’s reforms are “bearing fruit” – which may be true, though a large portion of the credit goes to neighbor and key trading partner Brazil for pulling out of its slump.

Furthermore, it helps that Argentina has a “unique” banking sector since it has a high portion of deposits compared to other LatAm markets, along with lower than usual credit penetration.

Finally, there is a good chance that Argentina will be upgraded from a frontier to an emerging market this year.

There is no denying the positive economic developments of late in the Pope’s home country – Argentina. Its GDP has picked up, inflation has moderated slightly, and the country remains blessed with an abundance of natural resources. All this is true – no argument.

Argentina is in the midst of a dramatic dry spell this summer. Not only is rainfall below previous years – it’s around 40% below previous drought years, at least for February.

Compared to Argentina’s last significant drought – which dragged Argentina into a recession. Analysts are forecasting this drought to be worse than that one. Remember that corn and soybeans alone make up more than a third of the country’s exports – for a country with sizable budget deficits and runaway inflation, a shortfall of dollar exports is a crushing blow indeed.

For all the (probably overblown) hype you see around Argentina’s energy industry and gold mining prospects, it’s important to remember that Argentina never managed to develop much beyond basic grain industry along with its competition-sheltered autos business for exports (even cattle make up a shockingly small percent of exports).

Given this concentrated grain-based export picture, Argentina’s economy risks decelerating if things don’t improve quickly on the weather front. In 2009, another low rain year, at this point in the growing season the government estimated 46 million metric tons of soy production. Final results came in at just 40 million. With significantly less rain this growing season, look for a number even lower than 40 million tons, yet government forecasts are still up at 47 million.

Even with the 47 million figure, analysts already trimmed their consensus Argentine 2018 GDP growth figure from 2.9% last month to 2.5% now. Thus, Argentina is heading for a slowdown in 2018, as 2017 GDP came in at +2.9%. 2018 is heading for just 2.5% and likely more revisions downward as the impact of the drought continues to expand.

Historically, awful weather is a short-term problem. But it’s far from the only problem longer-term Argentine investors face. For one, that concentration in grain is a serious problem because grains have been among the worst commodity performers over the past 40 years.

While grain prices will undoubtedly continue to experience big short-term swings, technological advances in agricultural production per unit of land has made these products long-term losers. As long as Argentina is tied to the fate of grain prices, expect the economy to be a mediocre (or worse) performer.

On top of that, inflation is hardly stamped out. Inflation had been running in the low 20%s from about 2010 onward, before spiking to the 40s just before the Kirchner government gave way to the current capitalist experiment. Argentina is back to around 20% now – in line with the recent average, but hardly a return to a normal functioning economy. Analysts still see double-digit inflation rates continuing through at least 2019.

Argentina periodically allows pro-business government to run the country for a few years, but don’t give them enough latitude to pull the country into a cycle of sustainable development like Chile or Colombia.

For one topical example, consider the country’s schools. Schools were supposed to go back into session this week, but the majority of the nation’s teachers are on strike, demanding 24% raise to match inflation.

People in the developed world may think you simply have to elect a pro-business government and then, like a light switch, the economy ignites. But it doesn’t work like that. Those of us who have lived in Argentina see deep structural problems that one presidential term can’t come close to fixing. The turnaround will be a long process – and one that will never have time to get off the ground if the country’s finances collapse again. Keep in mind that rising interest rates and spreads will make Argentina’s recent efforts to borrow more money significantly harder.

The peso has lost another 25% of its value over the past year, with losses accelerating markedly as the growing season turned out to be a bust. Those “stable” deposits in the Argentine banking system may start fleeing to avoid another massive devaluation like what happened in 2001-02. Keep in mind the peso is down 25% in a year when the dollar itself got hammered, you’re looking at close to 40% losses against currencies such as the euro over the past year.

None of this is to say that Argentina can’t keep going up in the short-run. Momentum often works well beyond what fundamentals would support. An upgrade for Argentina to emerging market status could kick off another rally.

But the: “Macri capitalist in office so all is good again,” meme is running out of steam. GDP growth is heading downward in 2018 compared to last year (with more downward revisions likely to come). The government hasn’t stabilized its deficits or inflation – and the public sector continues to strike to demand sizable wage hikes.