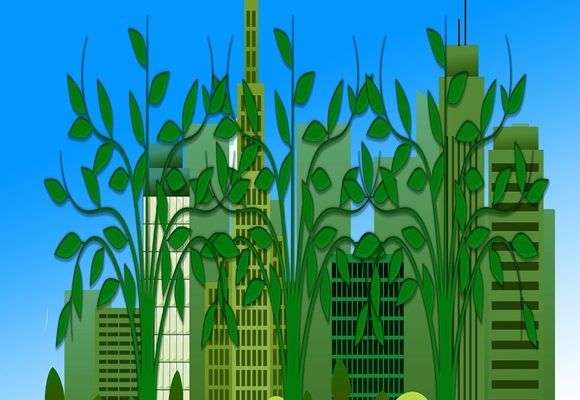 Gateway to South America on 01/12/2016 - 07:02 in All categories of countries are, Argentina Mendoza, Argentina-General, Argentine farms, Commercial Argentina

RenovAr 1.5 has doubled the amount of MWh announced for tender. In this way, it has exceeded the most optimistic forecasts. On 25 November, at a press conference in the micro cinema of the Palace of Hacienda, the Minister of Energy and Mining of Argentina presented the results of the tenders.

Among the facts that the government had taken into account when tendering such an amount, it was decided, as an underlying premise, to take advantage of the excellent reception of the program among investors, both domestic and foreign.

The maximum available at the nodes for energy transport was also considered, that is to say, all that the present grids can transport, for the utilisation of the final consumer, as much from companies, as from the public sector and individuals.

In the previous month – October 2016 – at the time of announcing this new call, a preliminary figure of 600 MWh was given to tender in this second and last call of the year. The awarding of more than twice what was expected has been a pleasant surprise for the markets and the public. 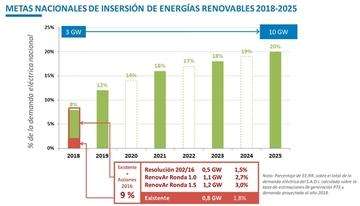 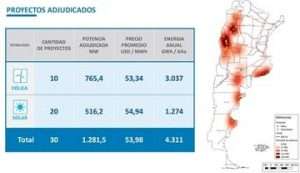 Minister has quantified the positive externalities of RenovAr

The Minister has said that adding both rounds of RenovAr 2016 will create 20,000 new jobs in Argentina. The investment will be US$4 billion. Of this total, an important part (which was not made explicit in the press conference) will remain in Argentina, either as payment of wages, or in the procurement of inputs to domestic suppliers. Another part will be used to pay for turbines, solar panels, and other inputs and technologies from abroad.

The goal which the Argentine Government has by the end of 2017 is an 8% contribution in sustainable energy. In addition to all tenders, including the emergency thermal energy tendered, this year, production of 9% would also be achieved. This is ahead of the projected goals.

In Argentina to date, there is an installed capacity of 32 to 33 GWh. However, only 24 to 25 GWs power plants are in production. This implies that with those awarded to date, added to the projects awarded in 2015, within a maximum period of 900 days, 25% of the energy in Argentina will be contributed by renewable energy matrix projects.

The Minister also noted that, in pursuit of the diversification of the energy matrix, there is still a shortage of projects incorporating sources such as biomass and biogas.

Another observation made was that in 2016 the average range of prices of renewable energy negotiated by the previous government which was between US$112 and US$150 per MWh, has now dropped to a new average price of US$73 per MWh. It is projected that as more bidders enter the market, the average will continue to fall significantly.

The date for the renewal call for round 2, next May, is still to be confirmed. This will depend directly on the capacity for transporting the system’s energy and the planning of tenders for the necessary works for the increase of the installed capacity, which is still at the auditing stage. 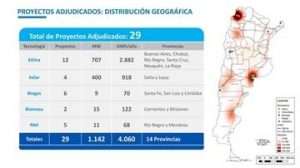 The projects awarded in round 1.5 have 120 days for the contract to be signed. From then, the maximum period for the construction and commissioning of wind farms and solar parks is 900 days. That is, in two and a half years maximum they must be in operation, with a few exceptions related to turbine deliveries.

In the case of projects awarded in round 1, these have terms of between 12 and 24 months.

The longest term in round 1.5 is related to the difficulty in buying sophisticated turbines and quality solar panels. The best companies that build them have waiting lists, basically, due to the increase of projects in renewable energies in many parts of the planet. The treaties, which have been signed by many countries, are committed to increasing installed capacity with renewable energy sources.

The call to round 2, which for now has an estimated date for May 2017, depends on all the factors outlined above. Such a date is subject to the award, development and start-up of projects to increase energy transport capacity.

This first year of the RenovAr project has been a complete success. In the short term, this opens up a new space for investment in the energy industry in Argentina. Investment in infrastructure for the transportation and distribution of energy will be necessary.

In short, the progress has been remarkable, and for the future – both short and medium term – the doors are open for investment in the energy sector of Argentina.