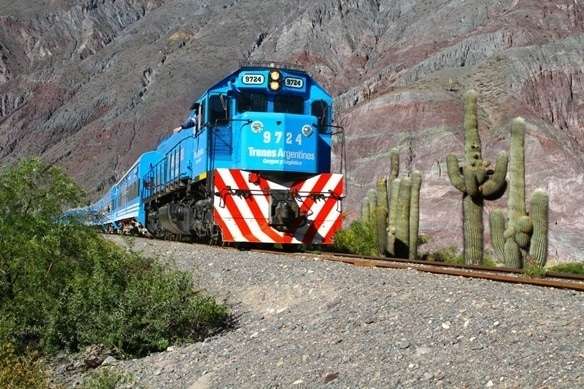 The Argentinean railroad system, after decades of abandonment, is back on course. Argentina purchased 1,200 wagons from China’s CMEC Company, which are destined for “Belgrano Cargas.” The total amount of the investment, financed with a loan, is USD 2,470 million. For its part, the investment in rolling stock is USD 807 million.

Together with the acquisition of wagons and locomotives, a rehabilitation plan of 1,600 kilometers of railways has been carried out on the Belgrano line, which runs through six provinces: Jujuy, Salta, Tucumán, Santiago del Estero, Chaco and Santa Fe, finally connecting with the ports of the Gran Rosario.

Also purchased were 107 locomotives and 2,000 spare parts, maintenance machinery and tools. The new material allows a significant increase in the load-carrying capacity of the lines, a great reduction in costs, a better option for the exit of exports, and the direct generation of jobs.

With regard to technology, the wagons acquired have brakes with an emergency valve and a device that regulates the braking power, according to the load of the wagon.

Two locomotives arrived in December from Shanghai, along with 130 wagons for the San Martin line and 100  for the Belgrano line.

The locomotives are equipped with a German engine of 3,000 horsepower and technological brakes from the German company Kmor-Bremse, and reach a maximum speed of 80km per hour.

The last registered arrival, in the first days of February 2017, consists of two locomotives. The Minister of Transport of Argentina, Guillermo Dietrich, received the locomotives in the port of Buenos Aires, destined for the Belgrano line that unites the north of the country with the ports of Buenos Aires and Rosario.

The arrival of the rest of the rolling stock will be completed this year, 2017

Argentina modernizes its rail system to be more competitive

“The reactivation of the railroad is a pending debt with the regional economies because they bring the most competitive opportunities of logistics to enhance the output of our products abroad. Cost reduction and employment generation are fundamental to northern growth and of Argentina,” said Mr. Dietrich.

Ezequiel Lemos, President of Trenes Argentinos Cargas, commented: “Every new locomotive arriving is fundamental for the transformation of the Argentine rail network. Today, after 40 years, we are receiving the first ones for the Belgrano line. Now, four of the 107 locomotives have arrived in the country, and together with the new rolling stock, will help reduce transportation time, increase the reliability of the service and thus favor the producers and regional economies, largely disadvantaged by the disappearance of goods trains.” 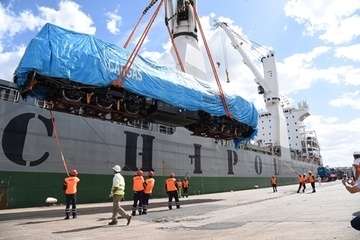 As part of the “Belgrano Norte Plan” – an initiative with which the government seeks to promote the social and economic development of the north-western provinces, the most remote of the Atlantic ports – the Plan of Restoration and Enabling Railways made concrete the integration of operations that use the roads of both countries, uniting the two most important ports of northern Chile, Antofagasta, and Mejillones, with the Güemes Industrial Park in Salta.

“When I showed pictures, they praised the landscape of the Puna,” said Ezequiel Lemos, “and no one imagined that the train track was underneath the bushes.”

The operations, for now, consist of the transport of lime from San Juan by land to Salta, and from there by the Transandine to Socompa in Chile, bound for Minera Escondida. Sodium carbonate is also transported, a precursor used in mining.

In the short term, the transport of hydroboracite, liquefied gas, and sodium ash is also contemplated. Although the potential is varied, eventually the suffering regional economies could send a balance of food, sugar, fruits, and tobacco, and would be major beneficiaries of cross-border transportation.

There is great optimism about the restarting of the freight trains. Train rehabilitation not only brings safety, logistics, economic, and environmental advantages to trade between northern Argentina and northern Chile, production is also expected to gain competitiveness in Asian markets.

As an example, the cost of transporting a container from Salta to the port of Rosario is higher than the freight cost from Argentina to China.

The option that the producers in the north of Argentina will have to send their exports through the reopened route will mean a 30% saving in the freight cost.

In sum, the positive results of the restructuring of the railway system are already being observed. Mining in northern Chile receives input from Argentina at a lower cost for transportation, and for exporters in the north of Argentina, a great option is provided, to be more competitive when it comes to Asian markets.