Argentina looks to renovate the Railroads to Prolong Soybean Boom 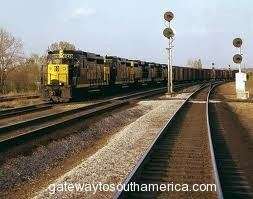 Argentina’s nationalization of two railroads in the past month paves the way for the renovation of a network from the foothills of the Andes to the coast, cutting transport costs in the world’s third-largest soybean producer.

Belgrano’s takeover ends nine years of limbo since its renovation was first announced. With $2.1 billion in previously announced loans from China for the network, Argentina can renew railroads built over 100 years ago to access its agricultural wealth, said Marcelo Bosch, appointed by Fernandez in May to run the state railroad. Fernandez plans to use the lines to slash farm transport costs and boost the country’s grains and oil seed production by 50 percent to 150 million metric tons by 2020.

“The only way to boost grains and oilseed output is to recover the cargo lines,” said Bosch, a former Credit Suisse Group AG executive, in a June 12 interview. “Fortunately, we have loan offers from China and we will use those facilities.”
The investment can’t come soon enough for farmers. Farm associations went on strike June 15 to protest high taxes and poor infrastructure. The strike, set to end today, halted 90 percent of grain and oil seed deliveries to the Rosario port, the country’s largest agricultural export hub.

Strategic Importance
Argentina’s rail system “is strategic for the competitiveness of exports,” Interior and Transport Minister Florencio Randazzo told reporters on June 4. “We have to recover the rolling stock, the rails and the infrastructure to reach our goal of transporting via the Belgrano line 100,000 tons a month by the end of this year and 300,000 by 2015.”
China has offered a total of $10 billion in loans to revamp the Belgrano railroad, Agriculture Minister Norberto Yauhar said in a June 13 interview in Buenos Aires, shortly after visiting officials in China.

“China is Argentina’s new political partner,” said Yauhar, who is scheduled to meet China’s deputy agriculture minister today in Rosario, a city on the banks of the Parana River where most of Argentina’s crops are loaded for export.

The first objective of the freight companies’ new management is to renegotiate one loan of $2.1 billion agreed to with China Development Bank Corp. and China Citic Bank Corp. (998), Bosch, 41, said by phone from Buenos Aires on June 13.

Truck Transport
The country currently relies on trucks to carry 84 percent of its grains and oilseeds to ports. Of the rest, 3 percent is transported by barge and 13 percent by rail. Rail freight costs 5 cents per kilometer, while road haulage averages 11 cents, according to Gustavo Lopez, a Buenos Aires-based logistics analyst at the Buenos Aires Cereals Exchange.
The Argentine transport figures contrast with those of the U.S., where 65 percent of the grain and oilseed harvest is shipped by barge, 25 percent by railroad and 10 percent by truck, Lopez said.

Farmers say they need to cut costs to remain competitive on global markets as prices and wages leap about 25 percent a year in Argentina.
“Ambitious as it looks, the renewal of the cargo railways will happen,” Hugo Sigman, who operates farms spanning 400,000 hectares (988,400 acres) throughout the country, said in an interview in Buenos Aires. “The project is a must if Argentina wants to increase its output.”

More Capacity
The newly nationalized Belgrano Cargas y Logistica SA, which connects the ports of Rosario and Buenos Aires to 13 of Argentina’s 23 provinces, will absorb the lines nationalized from ALL, as well as the Urquiza and San Martin lines that ALL had operated.
With these additions, its transport capacity will grow to as much as 6 million tons a year from 1.2 million tons, Bosch said. Among investment plans are the relaying of 1,000 kilometers (622 miles) of track at a minimum cost of $1 million per kilometer, Bosch said. Belgrano was “just treading water” under the previous ownership, he said.

Argentina widening budget deficit, which was the largest in 11 years in 2012, and competing demands for funds from state-controlled oil company YPF SA will hinder attempts to turn around the nationalized and recently created company, said Michael Cordonnier, president of Chicago-based Soybean & Corn Advisor Inc.
The government has failed to improve companies it has seized previously, he said.

Track Record
“I am dubious that the government’s intent is to make things better,” said Cordonnier, adding that Argentina is already more competitive than Brazil in transporting soybeans from inland farms to the coast. “The government doesn’t have a good track record in making things better.”
Two commuter trains crashed on the outskirts of Buenos Aires last week, killing three people, on a rail line operated by a company under a government concession. The line had been taken over from a different company last year after a separate accident that killed 52.
“One of the challenges we have imposed on ourselves is to recuperate the service of passenger and cargo trains,” Randazzo said June 4, when the government expropriated the ALL concessions.

Argentina accounts for about 20 percent of the global soybean harvest, trailing only Brazil and the U.S. in global rankings, according to the U.S. Department of Agriculture. The country is set to harvest 51 million metric tons of soybeans in the 2012/2013 agricultural year, the second-highest on record, USDA figures show.

The government may face protests by truckers who stand to lose business from a revived rail service. Labor union leader Pablo Moyano announced a surprise two-day strike on June 10 to demand a pay increase. The strike was suspended after getting a 26 percent wage increase.

Truckers have disrupted soybean harvests since Moyano’s father, Hugo, leader of the union confederation, fell out with the president in 2011, driving up prices on the Chicago Mercantile Exchange during the southern Hemisphere harvest months between March and May.

Ownership Stakes
The truckers union and the rail-workers union each owned 6.6 percent stakes in the group that managed the Belgrano line before it was expropriated by the government. Hugo Moyano declined to comment, his spokesman, Hector Lopez, said in a telephone interview.
The government seized the concession to operate the Belgrano rail company from a group led by Argentine businessman Franco Macri. Macri’s son, Mauricio Macri, is the mayor of Buenos Aires and a political opponent of Fernandez.

Alberto Rodriguez, president of the Grains Exporters chamber, downplayed the risk of conflict between the railroad project and the truckers. Farmers will still need trucks to deliver their products to the train station, he said.

“If the railroad plan is really executed, it will boost Argentine oilseeds exports as current truck freight costs make it impossible for farmers in many provinces to even consider planting soy or corn,” Rodriguez said in an interview. “Exporters have always expressed their intention to bring in money for such infrastructure if conditions are clear.”