Argentina is leading the way in sustainable dairy farming

Gateway to South America on 03/12/2017 - 11:01 in All categories of countries are, Argentina-General, Argentine farms

With the inauguration of its huge biodigester in Santa Fe, Adecoagro adds the production of its energy needs from cow manure. The projected change of the milk paradigm has now become a reality.

With the inauguration of its new biodigester, completed this week, the cowshed of Adecoagro in Christophersen (south of Santa Fe) closes the circle of sustainability in dairy farming. It is the missing link to consolidate a true paradigm shift in Argentine milk production: high productivity based on a complete confinement model, collecting manure and its commercialisation as a source of electrical energy and disposal of the effluent on the pastures.

Economy 360 in scale. Adecoagro already have 7,000 milking cows which live in huge sheds, on sandbeds with ventilation and all the comfort attributes for both workers and animals. In these conditions, the dairy potential of cows is fully expressed: last year averaged 36.7 litres per day and so far in 2017 they are over 37. A productivity that doubles that of the seven pastoral dairy farms with 1,800 cows received in 2002, when Adecoagro began operations.

The vision of Mariano Bosch, who had gone out into the world to seek capital to develop agricultural and agro-industrial projects, was that there was a technological “gap”.

In the case of the dairy, one could act on two fronts: improve forage productivity in the fertile lands of the south of Santa Fe, and the genetic potential of the cows could be fully exploited. For this, the functions had to be independent. The pastures produce abundant and quality forage which is harvested and stored and the cow converts this forage into milk. The Achilles heel was the lack of experience in the country, totally devoted to the pastoral paradigm. Likewise, in 2005 Bosch and his team,  under the direct command of Ernesto Pittaluga, dairy manager of the company, made the decision to put together their first covered dairy farm of 1,500 cows. They then went out into the world to search and learn. They knew they were going to pay a flat fee and that the most expensive toll would be the management of the cow manure.

They adopted the sand bed method and learned to handle it which involves, extracting, sifting and drying. But it was necessary to treat the effluent also, which has now evolved.

Mariano himself says: “At the end of 2016 we participated in the RenovAr Round 1 Program, an Open National and International Call for renewable energy supply under the direction of the Ministry of Energy and Mining of Argentina. As a result of having been awarded our offer, in March 2017, we entered into a contract for the sale of renewable electricity with CAMMESA, which commits us to deliver 1.42 MW over the next 20 years to the network. ”

Just nine months after having started the work in January 2017, the plant was in full operation, generating the volume of gas needed to keep the generator on and producing the volumes of energy committed, two months before the proposed deadline.

“An environmental solution has been consolidated and another link is added to the capture of value from the productive capacity of the pastures in the area,” adds Bosch. “With rotations that maximize the use of the soil resources and the generation of forage in a sustainable manner, we can efficiently feed the cows”.

Then the feces collected from the total of the cows through the cleaning of the sheds, which is done 3 times per day, is separated from the sand to enter the process of bio digestion under controlled conditions. These conditions of a delicate balance between temperature, acidity, a composition of the “digestate” and other variables, favor the development of methanogenic bacteria, which are responsible for producing methane from organic matter.

The processing capacity is 2,000 cubic meters per day of effluent as is. It involved an investment of 6 million dollars and has an installed capacity of 1.4 megawatts (MW), with an Electric Power Generation capacity of 9,000 MWh / year.

“In this area, Ernesto Pittaluga is excited, as it is one more link in the chain of exploitation of the productive potential of the pastures, since the biodigester allows us to value what was contained in the waste feces and could not be used in the first process digestive to which the food was subjected within the rumen of the animals “.

On the other hand, it provides a solution of high environmental value by capturing methane, preventing it from reaching the atmosphere as such, also minimizing the generation of odors.

But that’s not where the story ends. The residues of the bio digestion process have a high fertilizing power. 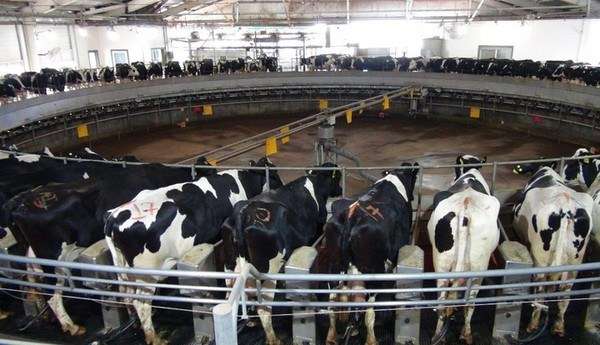 Therefore once the process is finished they are separated into three phases. In the first stage a solid biofertilizer of high agronomic value is obtained and distributed with carts arranged for this purpose in the batches. Then, the second stage of decantation in waterproofed lagoons, where a semi-liquid material is generated that is distributed with specially designed tanks to achieve a good distribution of this presentation of biofertilizer.

Finally, another waterproofed lagoon where the material is completely liquid, allowing to pump it through an irrigation pivot, fulfilling not only the irrigation requirements but also providing minerals as a liquid form of biofertilizer.

In this way and using the three different presentations of biofertilizers strategically within the rotation, the circuit of use of the soil resource ends, “feeding back to guarantee the sustainability of its productive potential that guarantees the production of forages and grains as the beginning of the chain of value added “.

In addition to the increase that this energy production generates by itself in our economic result, they have started the process to generate carbon credits.

“Obtaining them would not only leave in evidence the impact that this type of systems has on the conservation of the environment, but it would generate a marginal increase in the income of the project”.

In total, since they started with the cowshed which now is reaching 7,000 current milking cows,  they have invested 50 million dollars.

The plan is to double this, now that they have closed the circuit and are consolidated in all aspects of the system. And for this they will invest another 60 million. It was approved by the shareholders,  five years ago when the company floated on the New York Stock Exchange, where it operates with the acronym “AGRO”.

The Christophersen dairy operates with 150 employees directly, a figure that will double in 2019.

“For each direct position, we calculate between 4 and 5 indirect, which has a phenomenal impact in the area,” concluded Bosch.

In 2019 they are projected to have over 14,000 milking cows in this location.  Then the focus will be to build a high value dairy processing factory.