Argentina is the top tourist destination in South America 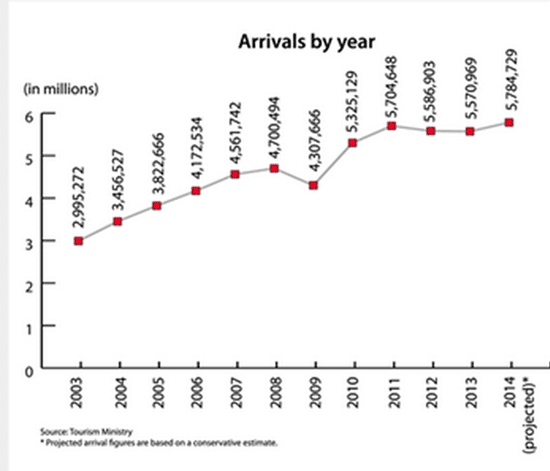 Argentina will  welcome some nearly six million visitors in 2014.  Unlike previous periods most of these tourists ( 75% ) are Latin American with Europeans and North Americans mostly staying away.  Chile, Brazil, Uruguay and Paraguay being the top sources of visitors. In 2003, just as the country was crawling out of its last economic crisis, almost three million international travellers visited Argentina. Ten years later, the country is on track to welcome a record number of visitors, with the Tourism Ministry predicting international arrivals will top six million by the end of the year.

But Argentina is not alone in the growth of its foreign tourism sector. International tourist arrivals worldwide have sky rocketed from an estimated 700 million in 2003 to over one billion in 2014, according to the UN World Tourism Organization (UNWTO).

What is unique about Argentina’s growth, however, is how it has become South America’s top tourist destination, competing with the continent’s most populous and geographically largest country, Brazil.

The origin of this trend lies in the 2001 crisis. In 2002, when government authorities floated the peso, the country was hit with a steep devaluation. This brought down the costs of goods and services to half and in some cases even three-quarters of original prices, while in neighbouring countries, currencies continued to appreciate.

In the years following the financial crisis, travellers — attracted by the cheap prices — began turning toward Argentina, where many have discovered possibilities in the tourism sector similar to Europe, but for half the price. International arrivals began growing in the hundreds of thousands and reached 4.6 million by 2008.

But just when the local tourism sector experienced its largest growth, the global economic recession happened, cutting into Argentina’s international arrival figures, which for the first time following the 2001 crisis decreased. The country recovered and managed to reach another record in 2011, with 5.7 million visitors, only to drop slightly in the following two years with recessions of -2.1 and -0.3 percent.

The outlook has changed considerably this year. International arrivals have soared 15.8 percent in the past nine months compared to the same period last year, with 549,000 additional tourists so far this year. The sector’s growth is the sixth strongest in the world.

Despite three months remaining in the year, it is likely that foreign tourist numbers will surpass the 2011 record of 5.7 million, since activity in the sector normally increases in the months of November and December.

The scenario means a sort of bonanza for the country, with foreign tourists spending US$4.8 billion last year. Tourism is Argentina’s third-biggest job creator, according to Tourism Ministry statistics. Several tourism-oriented businesses are observing increased growth, like Spanish-language institutes and tourism centres in provinces throughout the country.

Reasons for the tourism increase

According to experts from the Tourism Ministry’s Statistics and others,  there are two key factors behind this year’s increase: the devaluation that occurred at the beginning of this year in conjunction with the macroeconomic situation of neighbouring countries.
The combined effect of the 30 percent devaluation in January and fluctuations on the parallel exchange rate — of between 40 to 70 percent the value of the dollar on the official exchange rate — has made things cheaper for tourists, despite inflation. This has driven growth in tourism from neighbouring countries, especially from Brazil and Chile.

In 2013, an estimated one million Chileans travelled to Argentina, almost 20 percent of all tourists. The depreciation of the Argentine peso and the strength of the Chilean peso have made ski trips to Argentine winter resorts, for instance, significantly cheaper than those to Chile’s.

Although Chile was the largest source of visitors, the most remarkable increase in tourism was among Brazilian visitors. In 2003, only 350,000 Brazilians travelled to Argentina. And by 2013, this had reached over one million, with Brazilians choosing Buenos Aires City or ski resorts in Mendoza, Ushuaia or Bariloche as favourite destinations.

Preliminary international arrival statistics gathered so far in October show the trend continuing. The Tourism Ministry reports that more than 65,000 Brazilians visited the country last month while arrivals from Colombia and Spain are also up.

Emerging countries are expected to grow even faster, with an average 4.4 percent growth expected per year. As tourism grows worldwide, Argentina is poised to continue benefiting but by how much will continue to be contingent on the regional economic situation and the prices of the country’s goods and services.

Opinion: Whilst Europeans and North American have stayed away for a variety of reasons from economic to political, there is increased interest now being shown in visiting and possibility investing now that there is a strong possibility in political change to more pragmatic centrist government. It is also hoped that a new administration will settle the 10 years old fight with unpaid creditors who are a mixture of American and European Investors. If it is settled and that is a big if and the anti US rhetoric dies down then the Americans and Canadians  might return. The jury is still out on that one.