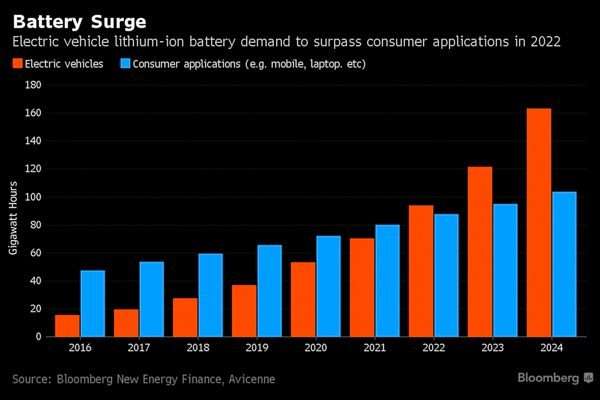 Gateway to South America on 07/03/2017 - 08:37 in All categories of countries are, Argentina Mendoza, Argentina-General, Argentine farms

Argentina has some good news for Elon Musk’s Tesla Inc., and bad news for lithium producers elsewhere: the country may be about to flood the market with lithium.

After President Mauricio Macri removed currency and capital controls and taxes introduced by his predecessors, about 40 foreign companies began to consider opportunities in Argentina’s mining industry, more than half of those in lithium, according to Mining Secretary Daniel Meilan.

Industry heavyweights Albemarle Corp., Soc. Quimica y Minera de Chile SA, Eramet SA and Jiangxi Ganfeng Lithium Co. are among groups looking at expanding or building new lithium operations in Argentina, as part of a $20 billion pipeline of mining projects through 2025, Meilan said Monday in an interview. China’s CITIC is also looking for opportunities, according to the government.

If all of the projects go ahead, Argentina’s annual output of the metal used in electric-vehicle batteries would surge to 165,000 metric tons, or about 45 percent of global supply, according to government projections. Prices will increase as much as 15 percent this year, Albemarle predicted last month.

“Conservatively, Argentina will represent about half of global lithium production by 2020,” Meilan, who also headed up mining under former President Carlos Menem in the 1990s, said from Toronto, where he’s participating in the PDAC mining conference. “This shows us that we’re starting to be well-regarded globally.”

Further fueling investor interest is a set of standardised rules for provinces that Meilan said will probably be in place by June or July. Under an accord negotiated between the federal and provincial governments — which own the minerals in their territories — miners will be charged a royalty of as much as 3 percent, he said. The agreement still needs congressional approval.

Deregulation under Macri, who took office in December 2015, has piqued the interest of global miners like Glencore Plc and Vale SA that had suspended or slowed projects in Argentina, according to the government. Rio de Janeiro-based Vale, the world’s biggest iron-ore producer, will finish a feasibility study in September for a scaled-back version of the Rio Colorado potash project that it suspended in 2013, Meilan said

Under the accord, the government will change the tax regime to make Argentina’s mining industry more competitive and improve mining-related infrastructure. Vancouver-based First Quantum Minerals Ltd., which is studying a copper project in Salta province, has been following developments and would like to see changes that offer better investment stability, Sharon Loung, a spokeswoman, said in a Jan. 31 email.

Tesla has a massive need for lithium-ion batteries both for its vehicles — including the Model 3 due later this year — as well as energy storage-devices. In partnership with Panasonic Corp., Tesla is working to collapse its battery supply chain and drive down costs.

Meilan said he isn’t concerned by the prospect of a flood of new lithium supply sinking prices.

“There’s a lithium triangle of Bolivia, Argentina and Chile and at one point the possibility of a cartel was proposed,” he said. “I think that’s crazy. The market should decide.”

An example of the emphasis that the Macri administration is putting on mining is its plan to host a summit of South American and North American ministers in Buenos Aires in May.