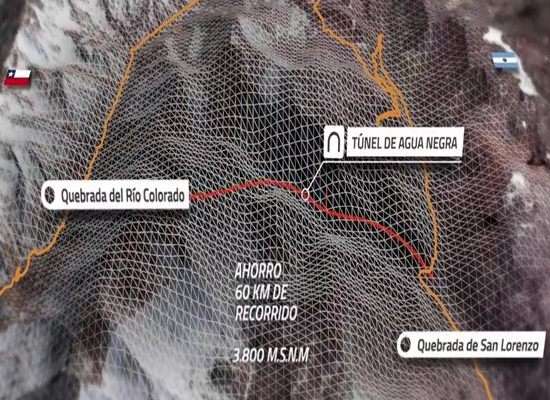 Gateway to South America on 20/04/2017 - 14:20 in All categories of countries are, Argentina Mendoza, Argentina-General, Argentine farms, Chile – General, Chilean farms

The IDB will provide $6 billion to Argentina. It will also grant more modest loans to Chile to implement bilateral flagship projects, such as the Agua Negra tunnel, which will facilitate the exit of production from Argentina and Brazil to Asian markets.

During the UNASUR Summit in 2009, the presidents of the three countries: Luiz Inacio Lula da Silva, Cristina Fernandez and Michelle Bachelet, signed a memorandum of understanding that laid the foundations of the Bioceanic Corridor, which is soon to come to fruition.

The route will connect the three countries, departing from Porto Alegre, Brazil. Then traversing a part of Argentina, it will cross the border tunnel of Aguas Negras and will arrive at the Port of Coquimbo, Chile.

The Agua Negra tunnel will consist of two separate tunnels with double lanes of 3,800 meters high, more than 500 meters deep, and a length of 14 kilometres. This will decrease by 60 kilometres the road that is currently in service.

The construction of the tunnel is a major engineering challenge, which to date already has all the siting, design and construction studies completed. When it is in operation, it will allow products of Brazil and Argentina to have expedited and continuous access to the Pacific Ocean – it will be kept open all year.

The current border crossing must be closed during part of the year, in the snowy season, so this does not guarantee delivery of cargo at the port of embarkation; it is dependent on whether or not the weather is inclement. This is a major obstacle because although the cost of transport is undoubtedly lower, insurance costs are very high because of the multiple occasions when insurance companies have had to cover losses of cargo, delay to embarkation and/or out-of-term delivery.

In 2016, the IDB agreed to provide a $1.6 billion loan for the construction of the Agua Negra tunnel.

In 2017, at the signing of the prequalification of the projects, which was attended by authorities from both countries, the Finance Minister of Argentina said: “We are building tunnels when the world is talking about erecting walls.

In the next stage, the antecedents of the companies interested in constructing the tunnel and its services were received. Until 31 March, proposals were received in this prequalification process. In this regard, the Mayor of Coquimbo commented: “In the last meetings we held with Governor Sergio Uñac, with the IDB and the MOP, we requested to make the technical requirements more flexible so that there are more participants in the prequalification process and move towards bidding”. In this first stage, applicants must comply with the delivery of the background on a number of technical conditions and demonstrate their financial capacity.

The launch is scheduled for August this year. The awards and signatures of the contracts will be finalised in 2018. This timeline is explained by the complexity of the work in the field of engineering and because all the components of the states must comply with the laws of both Argentina and Chile.

To complete this project, both countries have finance from the Inter-American Development Bank (IDB) of $1.5 billion. Last December, the IDB approved the first loan of USD 40 million for financial studies, and procedures and prior mechanisms for the preparation of bidding and execution of works.

The tunnel is part of the Central Bioceanic Corridor, the most important MERCOSUR trade link with Asia. The route has a length of 2,472 kilometres, with many sections already fully enabled and in operation. 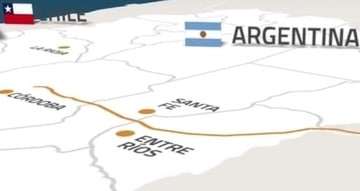 The IDB provides a total of $6 billion to Argentina

A portion of the loan will be used for the emblematic construction of the Agua Negra tunnel. Both sides of the mountain range have high expectations, as they will benefit from trade to the large Asian market and the boost to the port Coquimbo. In addition, Brazil also has high expectations of the work, which will also open a cheaper and safer way to export to Asia.

IDB loans also include the financing of various other works, all of the great economic and social impact.

In February, the Argentine Government signed an agreement for USD 120 million in a major program of development and strengthening provincial management. The program strengthens the production and trade of provinces in Argentina.
Examples of the type of works to be financed with IDB loans are: the development of an industrial park in Salta, the remodelling of the Avenida Costanera de Mendoza, the construction of an aqueduct in Corrientes, and the settlement of Route 40 in Neuquén.

Another major project is that of sanitation and drinking water in Buenos Aires and its periphery. In September 2016, the IDB committed USD 320 million to the work, which will benefit one million people, improving potabilization and distribution of household water.

“The credit line will improve the reliability of the potable water system and distribution of drinking water for a population of 1.1 million people, reduce losses and expand sewage service to about 75,000 inhabitants and expand the treatment capacity of Wastewater to serve 225,000 people

Another project, already underway, financed with IDB resources, is a 25-year term program designed to expand capacity and road safety for Argentina’s integration routes. The contribution of the IDB will be USD 300 million and the contribution of the Argentine Government will be USD 200 million. This includes the construction of a new 120-kilometre dual carriageway. There are also exchanges at different levels and access to various localities in their area of direct influence. Another part of the resources is devoted to the construction of 35.4 kilometres of the duplication of National Route 19, between the localities of Montecristo and San Francisco, located in the province of Córdoba

Other resources, worth USD 420 million, will be used to promote the province of Misiones as a destination for forestry and tourism investments, improving the projection of growth for the province.

In short, the $6 billion IDB provided to Argentina will address many roading and commercial infrastructure deficiencies and allow for emblematic works such as the Agua Negra tunnel, all works with great economic and social benefits.