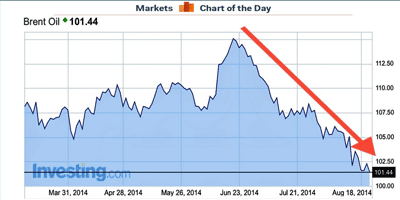 Gateway to South America on 03/12/2014 - 14:40 in All categories of countries are, Argentina-General, Argentine farms

The worst selloff in crude oil since the financial crisis is turning into a bullish sign for Argentina’s bond investors. Whilst oil-exporting nations such as Venezuela have been battered as the U.S. benchmark price tumbled to a five-year low last week, the decline may help cut Argentina’s record fuel import costs by as much as 20 percent in 2015, according to former energy minister Daniel Montamat, who now runs consulting company Montamat & Asociados. The savings would bolster foreign currency reserves that Argentina has used to pay debt.

Yields on dollar-denominated bonds issued by Argentina, which defaulted in July for a second time in 13 years, have fallen an average 1.4 percentage points in the past month to 10.01 percent. Borrowing costs in Venezuela rose 2.88 percentage points while those in Ecuador increased 0.41 point, index data compiled by Bloomberg show.

To bolster reserves hovering close to an eight-year low, Argentina has negotiated with grain exporters to sell more of their harvest and entered into currency swaps with China. South America’s second-biggest economy, which had energy surpluses for at least two decades until 2011, has spent $9.6 billion to import fuel in the first 10 months of the year, or about 32 percent of reserves that stand at $28.9 billion.

Argentina’s debt securities are outperforming Venezuela by the most on record as its benchmark bonds due in 2017 yield 12.2 percent, or 14.2 percentage points below similar maturity notes issued by Venezuela, which relies on oil for 95 percent of its export revenue.

Argentine bonds are still the third-highest-yielding in emerging markets as the nation has unresolved litigation with holders of debt left over from its 2001 default. Argentina defaulted in July as it refused to comply with a U.S. court order to pay those creditors in full.

Since reaching this year’s high of $107.26 a barrel in June, New York crude-oil futures have fallen 37 percent to $67.38. Oil fell to a five-year low on Nov. 28 after the Organization of Petroleum Exporting Countries left output targets unchanged.

Argentina, which has imported $5.5 billion more of energy products than it has exported so far this year, subsidizes industrial and residential users for gas and electricity. The nation was the largest importer of spot and short-term liquefied natural gas last year.

Argentina, along with Brazil and Chile, imports most of its fuel, while Venezuela, Colombia, Mexico and Trinidad and Tobago rely most on oil exports for revenue, according to a report published yesterday by Walter Molano, the head of research for BCP Securities LLC.

The decline in oil may ultimately hurt Argentina by deterring investments needed to develop energy resources, according to Mariano Lamothe, the head economist at abeceb.com in Buenos Aires.

YPF SA, the energy producer seized from Repsol SA by President Cristina Fernandez de Kirchner in April 2012, is drilling wells in the Vaca Muerta shale deposit with Chevron Corp. and other partners to regain energy self-sufficiency within five to 10 years.

“There are many parties, local and international, that want to get in now,” said Tawil, who invests in Madalena Energy Inc. (MVN), which has operations in Argentina. “Commodities run in cycles, and if you’re taking a long-term view, then this movement shouldn’t derail any sort of investment or planning.”

“The goal is to become self-sufficient and one day exporters of energy,” Montamat said. “But this time, we’re benefiting from being importers.”