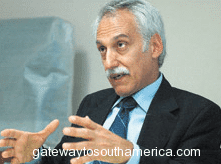 Argentina has a nuclear legacy more than half a century old and has supplied reactors to nations from Algeria to Australia in the past.

It has embraced an ambitious multi billion-dollar expansion program spanning desalination and submarines and it hopes to cater to the Arabian Gulf region’s plans for atomic energy.

But Argentina realizes it has some challenges before it can make itself a household name for nuclear power, such as France or Russia, or even rival the newcomer powerhouses South Korea and China.

“You think about Argentina, you think about football, you think about meat, wheat, corn, cereal,” says Hector Otheguy, the chief executive of Invap, an Argentinian technology company spanning nuclear power to satellites to petrochemicals that was spun off from the government in the 1970s.

“But in the case of Argentina, technology is up to date … I don’t want to say that we are number one, but we are there,” he says.

The agreement lays the groundwork for Argentina to potentially train Emirati engineers, transfer nuclear desalination technology or sell small research reactors for academic or medical purposes. The UAE agreement followed a similar one Argentina signed with Saudi Arabia in 2011.

“Our company has 40 years of experience in the nuclear field and particularly with overseas projects in the Arab world,” says Mr Otheguy, noting that building the capacity to complete nuclear-related projects can help the UAE diversify its economy.

“We started in nuclear but now we do other things. And maybe that’s an example of what would be done in the Emirates,” he says.

“You start with one technology but once you develop the capacity to develop complex projects, you can apply that methodology to other things, to solve other problems with the same people.”

Argentina’s export campaign coincides with a rush of spending in nuclear technology development, including a nuclear-powered submarine and a push for the licensing of a modular reactor that will be able to produce a handful of megawatts in remote locations. Worldwide, the nuclear industry is pinning hopes on future market growth for similar small reactors of about 25 to 30 megawatts that can be refueled every couple months.

The idea is to bring power to rural areas without the huge infrastructure required for a full-scale nuclear plant such as the one Abu Dhabi is building, with four reactors of 1,400 megawatts each.

Although Argentina was one of the first countries to work on a small modular reactor design, today it must compete with models from the United States to South Korea.

“We were pioneers in the concept,” says Mr Otheguy.

“We started the engineering but then there was a problem with lack of funds. If we had finished that, we could have sold several of these. But unfortunately we delayed that and now there are several companies doing that all over the world.”

Argentina’s nuclear industry has lurched its way through starts and stops brought on by changeovers in political leadership and credit crises in 1989 and 1999.

“When you have the economic crisis, the first thing you stop is projects that have to do with the medium and long term,” says Mr Otheguy.

“You cannot stop the needs that you need to run the country on an everyday basis. Three times at least [nuclear development] was started and stopped, then stopped several years and then started again. When you do that you lose the momentum of the people involved.”

In its first three decades of nuclear development, Argentina also faced questions from western powers over lax safeguarding of its enrichment facilities and whether its program had any military aims.

Only in 1983, when the country returned to democratic rule, did the nuclear program shift to civilian control. The government began signing agreements with Brazil for joint inspections and global treaties for non-proliferation.

In 2006, Argentina launched a US$3.5 billion spending program for nuclear, including the completion of a delayed third reactor. But it still has to quell public fears in the wake of accidents such as the meltdown at Fukushima in Japan in March 2011.

“Nuclear energy, the way it became known to the public is because of the bombs, Hiroshima and Nagasaki,” says Mr Otheguy.

“The perception of the people when you say the word, at least in Argentina and several other countries, is you see the shape of the explosion, so we have already a negative connotation in our minds since we were very young,” he says and adds the solution is education so people are better informed as to the benefits and relative safety of nuclear power.

Even if that happens and Argentina becomes a bigger player in the nuclear world, football is likely to remain more of a pressing concern for most Argentinians than expanding the use of atomic energy.

Part of an article from The National
(Visited 73 times, 1 visits today)