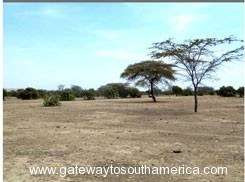 For Peru, agriculture has always been about water and finding inventive ways to capture it. Examples from prehistory include the terraced gardens of the Huari people, the underground aqueducts of the Nazcas, and systems of reservoirs and canals used by the Incas to irrigate their mountain fields. #adp02

Those ancients would be in awe of how modern Peru uses irrigation to coax increasingly more life out of desert lands considered to be the driest in the world. In the process, Peru is transforming itself into one of the South America’s major exporters of agricultural goods. #adp02

Located just south of the equator, Peru is the continent’s third largest country and offers a diverse range of climates. At the western edge, the coastal region consists of narrow desert plains bordering the South Pacific, whose north-flowing Humboldt Current provides a cooling influence on the region. Although the earth in this coastal region is fertile, some areas of Peru’s desert have not seen even an inch of rain in recorded history.

“It used to be nothing but dirt as far as the eye could see,” said Andrés Catalán, Carrier Transicold field service engineering manager for South America. “But the soil is rich in minerals, and once the farmers get a hold of water, they can produce anything they want – asparagus, melons, avocados.”

Steady Drips of Progress
Peru’s economy has been relatively strong over the past decade, growing 8 percent in 2010 alone, due in part to increased exports including the high-value minerals of copper and silver. But Peru is mining gold, so to speak, from mango and asparagus exports, thanks to agrarian and other reforms, as well as recent agreements promoting foreign trade.

Water from irrigation fuels the engine of agriculture, not to mention rural employment – farming is a labor-intensive pursuit in Peru, with about 30 percent of its population engaged in agriculture.

Peru’s present day farmland accounts for only 4.3 percent of its area, suggesting room for growth, but the obstacle is that the dry Pacific basin contains a mere 1.8 percent of Peru’s water. Some 53 rivers carry glacial melt and rain runoff from the Andes to the Pacific, yet only 30 percent of them flow year round, demonstrating the need for water management.

Strategic irrigation infrastructure development includes diversion of water from rivers via canals, construction of dams to create reservoirs as well as hydroelectric power, and diverting water across the Andean Continental Divide via tunnel. In January, during the U.S. – Peru and Ecuador Trade and Investment Mission in Lima, Peru’s Minister of Agriculture, Raphael Quevedo Flores noted that seven of Peru’s large irrigation projects will expand the agricultural frontier by 225,000 hectares, doubling the current acreage on the Peruvian coast for exportable products.

Shower of Produce
In 2010 alone, Peru generated a bumper crop of exports including cotton, coffee, paprika, citrus, and processed as well as fresh fruits and vegetables. (Although Peru lays claim as the birthplace of the potato, plus more than 2,500 native varieties, potatoes are not a major export crop.)

According to Peru’s Ministry of Agriculture, the $2.8 billion value (U.S.) of its 2010 agricultural exports represented a 31 percent increase over 2009. Europe is the primary consumer of Peruvian produce, followed by the United States.

Of products requiring refrigeration for transport, asparagus, grapes, mangos and avocados are the most significant revenue producers.

Considered today to be the world’s leading exporter of asparagus, Peru in 2010 exported 138,600 tons of fresh asparagus with a value of $291 million. By weight it was just 1.3 percent more than in 2009, but it represented a 16 percent increase in value. Although Peru’s grape exports are a fraction of the output of nearby Chile, the value is not insignificant in the scheme of Peru’s agricultural exports – 84,700 tons valued at $180 million, up 25 percent from 2009. Nearly one quarter went to the United States, followed by Hong Kong (15 percent) and the Netherlands (13 percent).

Waves to the Future
The majority of Peru’s exports traditionally departed Lima’s port of Callao, “the ‘only’ important port just five or six years ago,” said Catalán. But infrastructure development, including rail, has given rise to ports of Matarani and Ilo in the south, and the port of Paita is flourishing in the north as it helps to meet demand of the growing agriculture base there.

Accommodating the needs of exporters, Neptunia S.A., a Peru-based terminal and logistics services provider and Carrier Transicold service center, recently expanded its services in the north with a new 40,000 sq. meter (430,600 sq. foot) operation in Paita.

To help improve the quality and value of Peru’s exports, shipping lines are getting more sophisticated, employing more refrigeration specialists and making greater use of technologies such as Carrier’s EverFresh® controlled-atmosphere system and the eAutoFresh™ automatic fresh air ventilation system, according to Catalán.

Supporting them, as well as the grower-producers, Carrier has provided container refrigeration educational sessions in Peru. According to Catalán, the producers are showing a greater interest than in the past to better understand the shipping science and which technologies are best for which commodities, depending on various factors, such as specific produce respiration rates, tolerance to carbon dioxide, ethylene sensitivity and distance from destination.

“Mangos and asparagus can benefit a lot with controlled atmosphere, especially for the longer trips to Europe, which can be 20 to 25 days from Peru,” Catalán said. “Avocados headed for the United States can benefit from eAutoFresh, because they are short trips that can be as few as 10 to 17 days. But for longer trips to Europe, controlled-atmosphere can be the better option.”

Deciding on the optimum technology for shipping Peru’s refrigerated produce, appropriately enough, seems to be all about the water … or at least how much of it you need to cross.

Contact the Gateway to South America team to learn about the best investment opportunities in the region. The company is a benchmark for foreign investors wishing to invest inArgentina, Brazil, Peru, Uruguay and Chile, providing expert advice on property acquisition and investment tours.