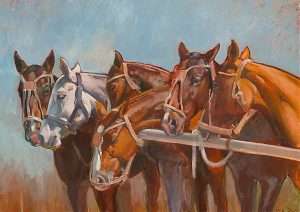 # Adp03Adriana Zaefferer knows no masters painting or art schools, either contests or prizes. “The truth is I’m not interested; for me, I just like to paint, “says the interviewee in the meeting at his home in San Isidro, while a trio of purrs around cats and she apologizes for newly arrived holiday South Argentina and does not even his brushes and his canvas carrying bags. What is innate talent of Zaefferer from girl had a natural inclination for drawing and painting, without the need to depress an art class. Mind you, surely inherited the talent of his parents, the surgeon Sunday Llauró Zaefferer and Hilda, her mother, both respected landscape painters.

Familiarity with art and long vacations in Patagonia with his family (he is the second of five children) Adriana inspired to draw their first strokes, made in pencil on paper. Their worship of nature and animals became his inspiration to start translate them on paper first and fabrics, later, when life had woven a few laps … London experience “I came to London at age 18, my father sent me to improve my English to the house of an aunt who was living there … “says the artist and says his arrival in London in 1971 was a good twist of fate. In the British capital, his aunt was working at the Embassy of Argentina and Adriana, in addition to learning English, mainly wanted to seize every moment to paint, he knew that there were about 60 racecourses in England and in the British capital was the famous London New Market, the Cathedral of horse racing. Account Zaefferer the first thing that impressed him was the passion and respect for the English for horses and marveled the treatment lavished them. Soon after landing in the United she dared to give her a box to the Argentine Ambassador in London, Gustavo Martinez Zubiría. That was his letter in the London society.

“Everyone told me … you came through the front door,” says the artist, and in the light of history can say that not only walked through the front door but at the right time, a decade later because this would have been impossible. With some contacts, the young artist settled in Argentina the studs with their pencils and papers and was dedicated to portray mares and horses. There he was discovered by the best coaches, who did not hesitate to invite her home and was in Kingsclare Stables where once met the Queen of England, which was accompanied by a young Prince Andrew. Queen discovered in one of the galleries a picture of a dog and asked who was the artist who did it. “A couple of days later, the Royal Racing Manager, Lord Porchester (then General Manager of the British Monarchy), I called the Windsor Castle to paint his favorite dog,” says Zaefferer. Pore ​​then, in 1973, the young painter Argentina was just 21 years.

Real Experience With the audacity that gives youth aboard his Volkswagen Beetle Zaefferer Adriana arrived one afternoon at the gates of Windsor Castle. There was driven to the royal apartments, where the Queen was waiting with his dog Edit “Heather” climbed into his lap, to pose quiet. “The truth is I did not know what he was doing there; did not understand much how he got there and I was wondering how you would, “says the artist. But I soon got to work, and two palatial evenings puppy was portrayed in colored pencil, by express order of His Majesty. Today, decades later, continuous framed and hung on a wall Desk Queen. But Argentina’s relationship with the British royal artist continued for several years; Queen asked Zaefferer eleven portraits of his favorite mares, now surely share the art galleries Windsor Castle with other paintings by the most prominent artists in the world.

It is clear that none of this had happened just a few years later, from 1982 and the prickly relationship between England and Argentina, broken in such a way that neither Adriana had been able to travel to his aunt (because there was no Embassy ) and even fewer think that the Queen would invite an artist to work to Argentina Windsor Castle. Surely that was a twist of fate. Exhibition Tournée spent very little time until the London gallery Argentina discovered the young artist called by the Queen of England, and in 1974 was invited to appear in the Tryan Gallery.

The exhibition was a success and Adriana sold most of the paintings hanging; at the same time, orders started coming portraits of animals, which was forced to travel to different countries in Europe. In 1980 the Wildenstein Gallery in New York (one of the most important art galleries in the United States, with more than a century old) doubled the bet and offered a simultaneous exhibition in New York and London. Zaefferer accepted and he was right, because the name of the artist beginning to stomp also the capital of the new world. At the local level, Ignacio Gutierrez Zaldivar first hung his paintings in the famous street Cerrito gallery, where the artist acquired great notoriety.

Years later he crossed the Avenida 9 de Julio and installed their works in the Gallery Arroyo. The last exhibition was in October 2010, in the Gallery of Socorro. “Adriana Zaefferer is the best ambassador of our equestrian art in the world,” reads the catalog of the exhibition last Zaefferer Adriana in Buenos Aires, and the author of this statement is simply to Ignacio Gutierrez Zaldivar, one of the best dealers Art in Argentina and owner of the gallery Zurbarán. Currently, the artist is working in his studio in San Isidro pictures and paintings preparing for a future exhibition, which will again London.

Read the full text at the Polo World Edition Nº56