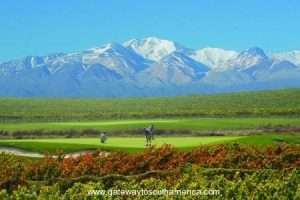 Have you heard about the global wine shortage? Of course you have: it’s been covered [1] in pretty much every media outlet imaginable, but Roberto Ferdman’s  piece for Quartz (“A Worldwide wine shortage could soon be upon us”) was one of the first, and also one of the most detailed. Still, it was the classic single-source article: it basically took one Morgan Stanley report , reproduced a bunch of the key charts, and added a clickbaity headline.

The charts, on their face, tell a pretty clear story, especially this one: 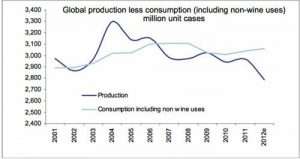 But if you look closely at the Morgan Stanley report, it starts to look less like a dispassionate analysis of supply and demand dynamics in the wine world, and more like an aggressively-argued attempt to put forward one particular investment thesis as strongly as possible. What’s more, the investment thesis is not, particularly, based on the existence of any present or future wine shortage; it’s simply trying to present the idea that demand for Australian wine exports is likely to rise, and to justify the fact that a company called Treasury Wine Estates is the bank’s “top Australian consumer pick”. (The report was written by Morgan Stanley Australia.)

For instance, the scary chart above is actually this rather less scary chart, tweaked a little: 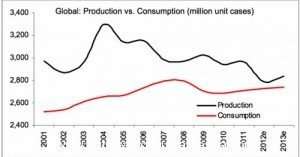 To create the first chart, Morgan Stanley just took the second chart, added 300 million cases to the red line, ine, and then — this is pretty cunning — simply deleted 2013 altogether, so that the uptick at the end disappears. (The 300 million number is Morgan Stanley’s estimate of the annual demand for “non-wine uses” of wine.)

Although the first chart is scarier than the second chart, even the second chart does a little bait-and-switch, which you can only find by looking at the sourcing note at the bottom of the page. The numbers for the charts come from OIV , the Organisation Internationale de la Vigne et du Vin, including the estimate for 2012 production and consumption. But the 2013 estimate, showing a modest increase in production, is not the OIV estimate; it’s the Morgan Stanley estimate. And what Morgan Stanley doesn’t tell you is that the OIV estimate for 2013 is much higher. Here are the OIV charts: 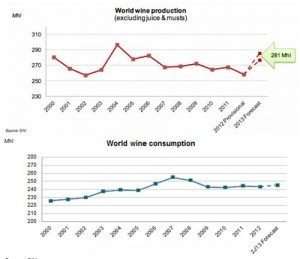 For one thing, the OIV charts draw sensible straight lines between points, instead of turning them into elegant curves which make the trend seem continuous. The trend is not continuous: these are annual figures per vintage, and each vintage is a unique, separate event. What’s more, while the amount of wine that will be drunk and produced in 2013 is not yet entirely clear. So OIV gives a range of possibilities, while being reasonably certain that wine production is going to increase substantially this year, by somewhere between 7.1% and 10.5%. Morgan Stanley, by contrast, gives no rationale at all for the fact that it has a forecast which is much lower than OIV’s; indeed, nowhere in the Morgan Stanley report is its 2013 forecast ever even quantified.

Add it all up, and the OIV actually concludes, quite explicitly, that the production-consumption difference for wine will “be higher than the estimated industrial needs” in 2013, for the first time since 2007. In other words, far from entering a period of global wine shortage, it looks like the 2008-2012 period of shortage is actually ending.

This global wine shortage, then, just simply isn’t real. Don’t take my word for it: ask the wine trade. Stacy Finz [11] of the San Francisco Chronicle asked a bunch of industry types about the Morgan Stanley report, and none of them took it seriously; Victoria Moore [12] of the Telegraph conducted a similar operation in Europe, and came to much the same conclusion.

My wine-making contacts raised more than an eyebrow at the ready, steady, panic news.

“Tell them to come to the Languedoc if they are worried,” said one. “I think I can help them out.”

Another noted that it is still possible to buy hectares of good vineyard in parts of France and Spain for less than the cost of planting one. In other words, the price of some wine is still lower than its true cost of production, an indication that the balance of supply and demand is still favouring the demanders, not the suppliers.

The Morgan Stanley report paints a picture of a long-term secular downward trend in area under vine, which is running straight into a long-term secular upward trend in global demand for wine. But reality is more complicated than that: thanks to a combination of technology and global warming, an acre of vines can reliably produce more wine, and better wine, than it ever did in the 1970s. And of course if demand for wine really does start consistently exceeding supply, then there’s no reason why area under vine can’t stop going down and start going up.

But never mind all that: the Morgan Stanley report has numbers and charts, and journalists are very bad at being skeptical when faced with such things. Even Finz’s Chronicle article, which sensibly poured cold water on the report, ends with a “Wine by the numbers” box which simply reproduces all of Morgan Stanley’s flawed figures. And besides, the debunkings are never going to go viral in the way that the original “wine shortage!” articles did.

As analysts have known since long before Henry Blodget was covering Amazon, the way to make a splash is to come out with a bold, headline-worthy thesis. Morgan Stanley did exactly that with this report, and I’m sure succeeded beyond their wildest dreams. I’m sure they’ve been celebrating their PR coup all week — probably with sparkling wine of some description.