According to the WHO, in 2012 165,617 people were murdered in Latin America and the Caribbean, making up about 35 percent of the the 475,000 homicides committed that year. The continent makes up about eight percent of the world’s total population.

Latin America also doubles the homicide rate recorded in African nations, with statistics also indicating that in three-quarters of the homicides committed in Latin America, a firearm was involved, hinting at one of the reasons why the region is such an outlier.

The region also exemplifies the drastic imbalances that exist in the gender of victims of “interpersonal violence.” On a global scale, no less than four out of five murder victims are men and that statistics is frequently even more lopsided in the region. For the purposes of the study, the WHO considered interpersonal violence as “the intentional use of physical force or power, threatened or actual, by a person or a small group of people against another person or small group.”

The report does not address deaths caused by police or security forces. 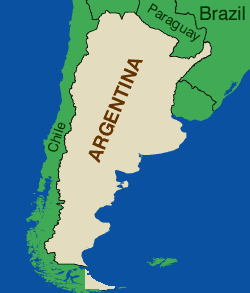 Despite the outsized homicide rate in Latin America (the lowest is 2.1 per 100,000 in the region of the West Pacific and Africa has a rate of 10.9) the countries of the Southern Cone — especially Argentina and Chile — have been able to keep the rate of deaths caused by “interpersonal violence” in the region of four to six homicides per 100,00 inhabitants.

Argentina did not participate in the collection of data for the the WHO report, which was co-authored with the United Nations Development Programme (UNDP) and the United Nations Office on Drugs and Crime (UNODC) and released this week as the Global status report on violence prevention 2014. As a result, the report utilizes the “vital registration data” method to collect data, in which “vital or civil registration systems record such events as live births, deaths, foetal deaths, marriages, divorces and other related occurrences, such as adoptions. Vital or civil registration systems are established by law to meet the specific needs of governments and of the individuals subject to the jurisdiction of the civil registration law.”

As such, data for Argentina do not contain information drawn from police and criminal justice sources in its records, which on occasion can vary significantly from the vital registration data. Furthermore, the specific breakdown of data on action plants, current legislation, patterns of alcohol consumption and the violence prevention programmes is not available for Argentina. However, the data show that the WHO estimated a total of 2,445 homicides in the country in 2012, resulting in a rate of 6.0 per 100,000 inhabitants. In keeping with a global trend, the victims of those homicides are overwhelmingly men, with the rate ballooning to 10.5 per 100,000 for males and corresponding shrinking to 1.6 for women.

In Chile, the homicide rate was estimated — once again using vital registration data — to be at 4.6 per 100,000, with a similar split in the proportion of men and women that fell victim to violence. Uruguayan data pointed to 267 murders in 2012, but given its much smaller population size the homicide rate edges up to 7.9.

But the variation in the region’s exposure to violence is evident when the Central American nations are taken into account, with Honduras leading the way. According to police data, the murder rate is 85.5 per 100,000 people but the vital registration data points to a much higher rate, with 103.9 murders per 100,000 as a result of 8,248 murders in 2012. When only considering men the number jumps to a stupefying 193.6. For the sake of comparison, the homicide among Honduran women of 14.1 towers over the 6.0 that the entire Argentine population endures. Perhaps most alarmingly, the police data in Honduras show that in 2004 the homicide rate was about 30 per 100,000 and the rate steadily increased ever since.

Venezuela (rate of 57.6, with 17,259 murders in 2012), Mexico (22) and Nicaragua (13), all of which represent vastly different political circumstances, reflect the disparities within the continent.

A possible proxy for the disparities that are reflected in the rate can be seen in the figures that the WHO estimates for the “mechanism” by which homicides took place. In Argentina the results were generally in line with the regional trends, with 58 percent of murders committed with firearms, and 32 percent by way of sharp force. The remainder were ascribed to “other mechanisms.”

Globally, one in every two homicides is committed with a firearm but that number jumps to three out of four murders for Latin America, and in Europe the figure is approximately one in four. Once again, Latin America has the dubious honour of leading the way with regard to the prevalence of firearms as bearing the responsibility for the deaths. The use of firearms to commit murder is more directly correlated with criminality than lethal domestic violence, and tellingly, Latin America sits in the middle of the global average for the prevalence of intimate partner violence with about 30 percent of ever-partnered women having experienced some kind of sexual or physical violence. South-East Asia ranks worst in this respect, coming in at 37.7 percent and high-income countries reporting a rate of violence of about 23.2 percent.

To take only a few examples, in Honduras the prevalence of the firearms to commit the 8,248 murders in 2012 was approximately 84 percent and in Venezuela the percentage is 90 percent. The countries with the lowest murder rates, also have a corresponding rate of firearm use that doesn’t often go above 30 percent.

As is visible in the graph, the differentiation between countries as a function of their income level are also useful to examine what is occurring to murder rates, with the highest-income countries showing a sustained reduction in the homicide rate since 2001, such that is now under 4 per 100,000 people

Many of the Latin American countries are classified in the upper middle income bracket, including Argentina, Brazil, Mexico, Colombia and Venezuela, pointing to a phenomenon that the WHO identifies when it addresses the murder rate among the age groups of 15-29 and 30-44. In those groups once again the upper middle income countries have the highest homicide rates, which the WHO says “may reflect the influence of factors other than income and which may be specific to upper middle-income countries in the Region of the Americas.”