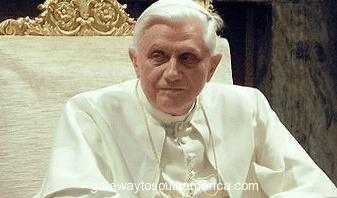 Three firsts for the new Pope: Argentine, Jesuit and his election by fellow cardinals was announced by twitter. Jorge Mario Bergoglio, is a theological conservative with a strong social conscience, and a modest man who declined the archbishop’s luxurious residence to live in a simple apartment and travel by public transport.

His simplicity was demonstrated with a self-deprecating joke when he first appeared to the waiting crowd, “the duty of the cardinals is to elect a Bishop of Rome,” he said, “and they’ve gone to the end of the world to find one”.

The 266th Bishop of Rome was also the runner-up in the 2005 conclave that elected German Cardinal Joseph Ratzinger to become Pope Benedict. He was not an obvious candidate, but moderate cardinals looking for an alternative to the then Vatican doctrinal chief backed him.

His election comes as a surprise to Catholics because, at 76, he was considered far above the ideal age to replace a pope who broke tradition and resigned because of his advanced years. He had hardly been mentioned among the “papabili”. And although he seems to be a healthy man, from early age he only has one lung.

Described by his biographer as a balancing force, Bergoglio has the ways of a monk, is media shy and deeply concerned about the social inequalities rife in his homeland and elsewhere in Latin America.

“He is absolutely capable of undertaking the necessary renovation without any leaps into the unknown. He would be a balancing force,” said Francesca Ambrogetti, who co-authored a biography of Bergoglio after carrying out a series of interviews with him over three years.

“He shares the view that the Church should have a missionary role, that gets out to meet people, that is active … a Church that does not so much regulate the faith as promote and facilitate it,” she added.

“His lifestyle is sober and austere. That’s the way he lives. He travels on the underground, the bus, when he goes to Rome he flies economy class.”

The former cardinal, the first Jesuit to become pope, was born into a middle-class family of seven, his father an Italian immigrant railway worker and his mother a housewife.

He is a solemn man, deeply attached to centuries-old Roman Catholic traditions as he showed by asking the crowd cheering his election to say the Our Father and Hail Mary prayers.

In his rare public appearances, Bergoglio spares no harsh words for politicians and Argentine society, and has had a tricky relationship with President Cristina Fernandez and her late husband and predecessor, Nestor Kirchner.

President Cristina Fernandez has avoided official national ceremonies where Bergoglio was leading because he has repeatedly talked about poverty, corruption and selfishness of the political system.

Bergoglio became a priest at 32, nearly a decade after losing a lung due to respiratory illness and quitting his chemistry studies. Despite his late start, he was leading the local Jesuit community within four years, holding the post of provincial of the Argentine Jesuits from 1973 to 1979.

After six years as provincial, he held several academic posts and pursued further study in Germany. He was appointed auxiliary bishop of Buenos Aires in 1992 and archbishop in 1998.

Bergoglio’s career coincided with the bloody 1976-1983 military dictatorship, during which up to 30.000 suspected leftists were kidnapped and killed — which prompted sharp questions about his role.

The most well-known episode relates to the abduction of two Jesuits whom the military government secretly jailed for their work in poor neighbourhoods.

According to “The Silence,” a book written by journalist Horacio Verbitsky, Bergoglio withdrew his order’s protection of the two men after they refused to quit visiting the slums, which ultimately paved the way for their capture.

Verbitsky’s book is based on statements by Orlando Yorio, one of the kidnapped Jesuits, before he died of natural causes in 2000. Both of the abducted clergymen suffered five months of imprisonment.

Those who defend Bergoglio say there is no proof behind these claims and, on the contrary, they say the priest helped many dissidents escape during the military junta’s rule.

His brother bishops elected him president of the Argentine bishops’ conference for two terms from 2005 to 2011.

Stories of his humility abound. When he was appointed a cardinal in 2001, Bergoglio persuaded hundreds of Argentines not to fly to Rome to celebrate with him but rather to donate to the poor the money they had raised for their airline tickets.

Bergoglio has been close to the conservative Italian religious movement Communion and Liberation, which had the backing of Popes John Paul and Benedict as a way to revitalize faith among young people.

Rev Gerald Fogarty, a Jesuit and Church historian at the University of Virginia, said he was “pretty sure I’d never see a Jesuit pope” and was surprised that Bergoglio had been chosen because of the criticism of his stand during the dictatorship.

The Jesuit order was founded in the 16th century to serve the pope in the Counter-Reformation and some members of the Society of Jesus, as the order is officially called, think no Jesuit should ever become pope.

In the 2005 conclave, Bergoglio emerged as the moderates’ rival candidate to the conservative Cardinal Joseph Ratzinger, who went on to become Pope Benedict. After that conclave, some commentators spoke of Benedict as “the last European pope” and said the Latin Americans had good chances to win the next time.

Bergoglio, who speaks his native Spanish, Italian and German, was then tipped as a possible head of an important Vatican department but he begged off, saying: “Please, I would die in the Curia.”

According to reports in Italian media well informed of Vatican affairs, Bergoglio impressed cardinals in the pre-conclave “general congregation” meetings where they discussed problems facing the Church.

After the 2005 conclave, a cardinal apparently broke his vow of secrecy and told the Italian magazine Limes that Ratzinger got a solid 47 votes in the first round while Bergoglio got 10 and the rest were scattered among other names.

Votes began to switch in the second voting round the next morning, pushing Ratzinger’s count to 65 and Bergoglio’s to 35. Limes said the Argentinean was backed by several moderate German, U.S. and Latin American cardinals.

The third round just before lunch went 72 for Ratzinger and 40 for Bergoglio, according to Limes, and the German cardinal clinched it on the fourth round that afternoon with 84 votes.

Bergoglio’s tally sank in the fourth round to 26, indicating some supporters had jumped on the Ratzinger bandwagon. “Some apparently concluded this was the way the Holy Spirit was moving the election,” one cardinal said after the vote.

However eight years later Bergoglio became Francis I and in an innovation the Holy See announced to the world that a new Pope had been chosen not only through white smoke coming from the Sistine Chapel, but also via a social network after it tweeted “Habemus Papam”.

The Vatican’s press department (@PCCS_VA) tweeted that cardinals locked in conclave had finally agreed on a new Holy Father in the third voting session, in a gathering that began on Tuesday.

The message was tweeted at 7:09 PM, a few seconds after the white smoke bellowed over Saint Peter’s Square, which was extremely crowded at the time.