☀ A look at the Potential for future growth in Latin America

A look at the potential for future growth in Latin America

If you take a look at this scorecard done in 2104 and then compare in 2017, we believe you will see some surprising changes if a creditable government gets into power in Argentina in November 2015. Not only will Argentina boom it will lift its neighbours economies. In particular Uruguay and Paraguay. 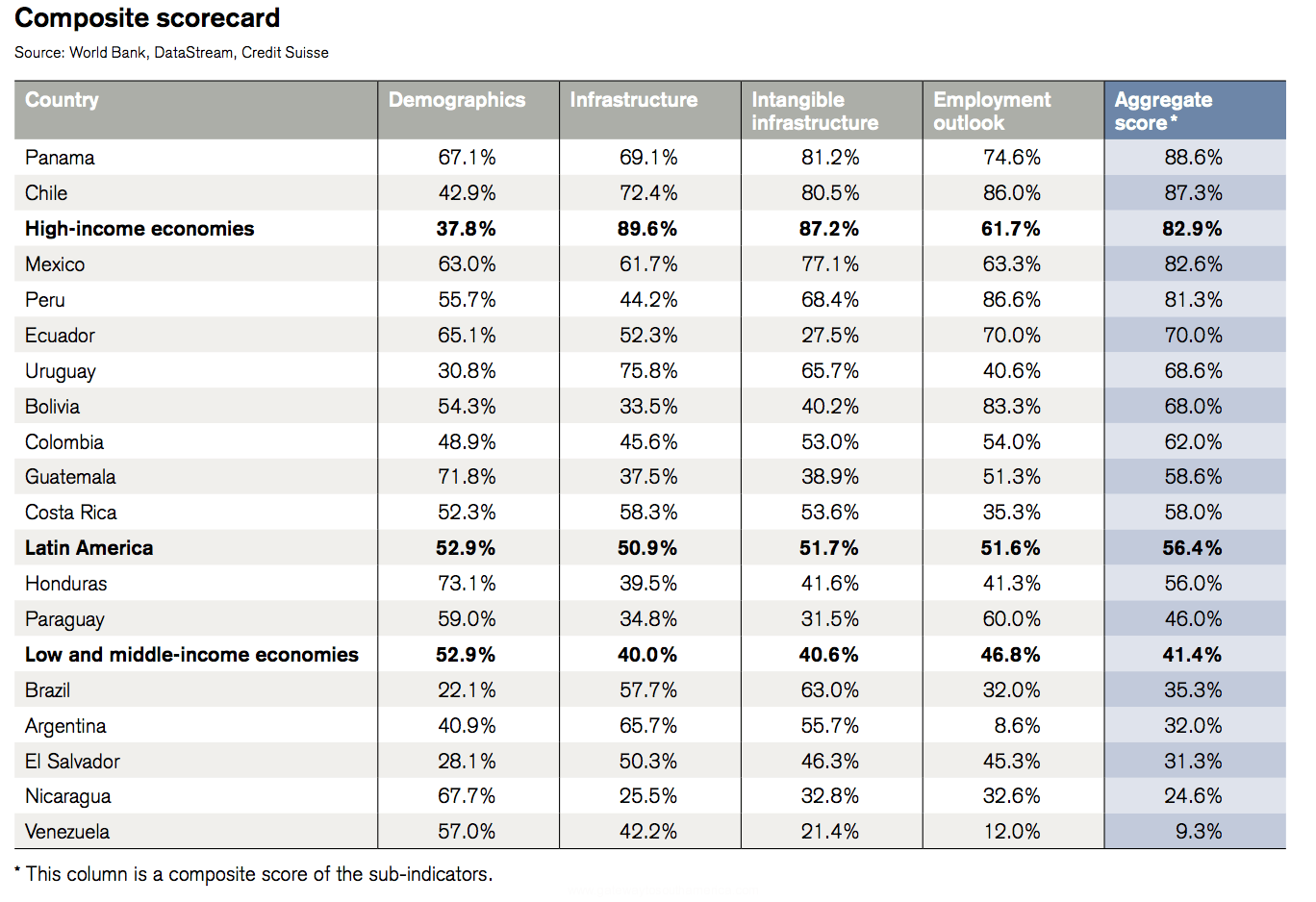 The scorecard also helps us identify areas where a country needs to invest to achieve its higher growth potential. The clear leaders in the region are Panama and Chile, scoring among the top 20% of countries in the scorecard, and better than the global high-income economy average. Mexico, Peru and Ecuador fall within the top 30% of countries, and they are followed by Peru, Brazil and Argentina

Venezuela, despite its natural resource wealth and high GDP per capita, is a laggard in every  respect and falls within the lowest decile of countries.

While GDP growth is determined by several factors, we have tested whether our scorecards contain predictive power. We have reconstructed our global scorecards for the year 2006 (albeit with less data due to poorer availability) and estimated the relationship of the 2006 score with real GDP per capita growth until 2012, controlling for the relative level of GDP per capita. We find that there is a strong positive relationship between the composite score and subsequent real GDP per capita growth.

Assuming this relationship will continue to hold, we have used the 2012 composite score and the current relative GDP-per-capita levels to estimate the future growth rate relative to the global average. Some of the smaller economies, such as Bolivia, Panama and Ecuador may well surprise significantly to the upside. At the other end, we find Venezuela a country that might see growth in the next few years significantly undershoot.

While Argentina has potential as a result of good intangible and tangible infrastructure, its aggregate score is particularly low as a result of the dire economic conditions that currently prevail. The situation has deteriorated further in recent times, with international reserves falling further in 2013.

Brazil also has a relatively low aggregate score but for different reasons. The country suffers from worsening demographic conditions which limit its growth prospects. In addition, it has an infrastructure deficit that needs to be bridged to ensure strong productivity growth. There has already been strong improvement in the employment outlook score in recent years, and this will likely continue in the coming years, as the economy expands. Nevertheless, the employment score is still low relative to the country’s potential. Policy makers need to do more to support productivity growth and competitiveness.

Among other economies, Mexico, Chile and Peru could exceed the global average growth level. Mexico in particular receives consistently high scores across all factors and as a result it is well positioned to see a pick up in growth in the coming years. This will likely be supported by the implementation of the structural reforms recently approved, as well as higher growth in the USA.

Chile and Peru are among the most successful economies in the region, enjoying a strong growth potential. Peru scores relatively poorly in infrastructure but is still among the top 20% of economies globally. This is underpinned by a very favorable employment outlook – an area where the economy enjoys the highest score in the region.

Demographics in Chile are relatively unfavorable compared to other economies in the region, primarily due to an aging population and a low fertility rate. Yet, the economy scores better than several high-income economies, and could enjoy high growth rates for more years to come

Part of a report by Credit Suisse