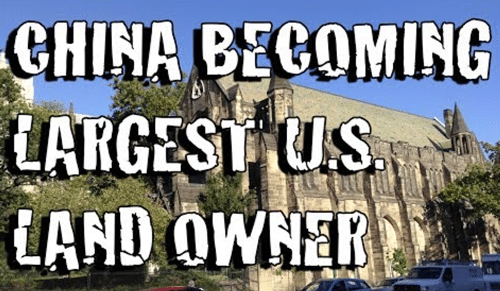 This is what is happening in my home country New Zealand. Will this buying interest now come to South America now that many of these countries are also heavily indebted to China.

New Zealand real estate market is currently under pressure from Chinese buyers desperate to get money out of China. South America is not receiving any of this money as it is mostly going into residential properties  in stable economies which means they are looking for in the most English Speaking Countries with high education levels.  This means Australia, New Zealand, Canada, London, United States are all having elevated investment levels from this source.  In New Zealand it has become highly political.

Mainland Chinese money snapped up at least 80 per cent of residential sales in parts of Auckland in New Zealand in March but were nearer 90 per cent in May, a whistle blower from the New Zealand industry says.

People of Chinese descent accounted for 39.5 per cent of the almost 4000 Auckland transactions between February and April.

Yet Census 2013 data showed ethnic Chinese who are New Zealand residents or citizens account for only 9 per cent of Auckland’s population.

The property insider – who wanted to protect their identity because they feared for their job – said the situation was much more serious than politicians data suggested.

The numbers should be more than doubled due to the weight of capital coming out of Mainland China, the

One big Auckland real estate agency, where many salespeople are of Chinese ethnicity, was selling almost every single property throughout many suburban areas to people living in China, the insider said.

In some cases, those buyers had a New Zealand connection “but it’s one group disenfranchising the other. It’s really taken off in the last 18 months. I’ve been studying the figures since October.”

“The Kiwis, South Africans and British who are traditional buyers have dropped out of the market because they just can’t compete with the Chinese. The people living in China are buying the places the Kiwis are trying to get, then those places are rented out the next day,” the insider said.

The Chinese are interested in Middle Class Suburbs of Panmure, Ellerslie, Greenlane, Epsom, Remuera, the North Shore – but not so much the Lower Class areas like Western and Southern Auckland.”

In some cases, a single Chinese resident was spending up to $15 million on Auckland properties and the higher the bidding at auctions went, the happier they were.

If they continue vacuuming up all the existing properties at the current rate of consumption, what will that do? The Chinese will outbid everyone at the auction. I’m sick of the phone bidder from Guangzhou. I’m relieved that someone at last is talking about this,” the insider said.

Peter Thompson, Barfoot & Thompson chief, acknowledged there were many Chinese buyers in Auckland but has disagreed with the politicians analysis.

“We know there’s been a large portion of Asians buying property but there’s no way to tell if they’re one of three categories: NZ born, foreign-born NZ citizens or foreign-born foreign citizens. If you asked me about Asian non-residents, I’d probably say between 5 and 8 per cent,” Thompson said.

It comes amid warnings that rich Chinese investors will be looking to take their money out of China’s turbulent stock market and invest it in property overseas.

UK Press The Guardian reported that estate agents in Australia, Britain and Canada were also expecting a surge of interest from Chinese buyers.